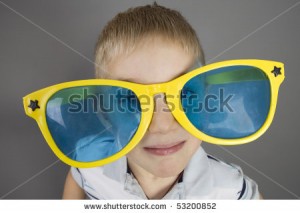 Novelty is found in new and unusual things. What makes the sunglasses in the photo a novelty is their deviation from the norm. Normal is usually not fun but abnormal often is. Sunglasses of normal appearance may be useful to block the sun’s rays but they lack any appeal through unusual design. Novelties, however, are  particularly useful for attracting attention.

Television commercials frequently rely on the novelty of such things as talking frogs or geckos, sophisticated cave men, and parachuting cows. Novelty is thus a valid aspect of seeking attention but it is generally not good as the thing itself that is attended to.

Parachuting cows may call our minds to Chick-fil-A’s product but we expect the restaurant to observe normal guidelines regarding what they consider chicken. I doubt if “new chicken” would meet with FDA standards.

We may call attention to Christian truth in novel ways but that truth is never novel in itself.

“Beloved, while I was making every effort to write you about our common salvation, I felt the necessity to write to you appealing that you contend earnestly for the faith which was once for all handed down to the saints. For certain persons have crept in unnoticed, those who were long beforehand marked out for this condemnation, ungodly persons who turn the grace of our God into licentiousness and deny our only Master and Lord, Jesus Christ.” (Jude 1:2-4) 1

Jude was cautioning his readers against those teachers who would depart from the “normal” definition of grace in favor of a libertine view that denied Christ’s current rule as Master and Lord. The alternative he presents is “the faith once for all handed down to the saints.” When we refer to this unchangeable aspect of “the faith” (beliefs, practices, and ethical standards) we sometimes call it “historic orthodoxy.” Though there are many differences of opinion on non-essentials, there remains remarkable agreement on doctrinal essentials.

Orthodoxy (right belief) is first and foremost biblical orthodoxy. Scripture trumps tradition every time. Still, historic orthodoxy — what the church as a whole has long considered essential truth — is a good test for present day teachings. Novel presentation may be as useful as parachuting cows but novel truth is as dangerous as non-chicken chicken.

In the letters to the seven churches in Revelation, what the Spirit was saying to the churches was a rebuke for their deviation from the unchanging faith Jude says was once for all delivered to the saints. Neither time nor place will ever altar the content of Christian truth. There is no “new truth” and those who think they know better than all other Christians are on dangerous ground.

Unfortunately, the novelty of “new truth” is often worn as a badge of honor by those who embrace it. They become like people who wear their novelty sunglasses with an elitist attitude of derision toward the “unenlightened” people still wearing boring, normal glasses.

Such elitism is a very intoxicating thing. It gets the adrenaline pumping to think of oneself as part of a new, doctrinal revolution that normal Christians are clueless to. This intoxication blurs rational thinking and blinds people to the often horrendous hermeneutics (Bible interpretation) used by leaders in such movements. Novel doctrine lodges like a barbed hook into the flesh of proponents and it is seldom removed with ease.

Rather than fall for the exciting lure of being part of a revolutionary movement, we should see doctrinal revolutions as rebellion against historic orthodoxy. Anyone who thinks they know better than the church through all ages is proud and in need of instruction — instruction God has provided through a multitude of counselors throughout church history.

Where there is no guidance the people fall, But in abundance of counselors there is victory. (Proverbs 11:14)

Without consultation, plans are frustrated, But with many counselors they succeed. (Proverbs 15:22)

For by wise guidance you will wage war, And in abundance of counselors there is victory. (Proverbs 24:6)

Thousands will crowd to hear a new voice and a new doctrine without considering for a moment whether what they hear is true….Inability to distinguish differences in doctrine is spreading far and wide, and so long as the preacher is ‘clever’ and ‘earnest’, hundreds seem to think that it must be all right, and call you dreadfully ‘narrow and uncharitable’ if you hint that he is unsound! — J. C. Ryle