Next page: Prof Ji-il Tark on the World Mission Society Church of God

The World Mission Society Church of God, founded by Ahn Sang-hong (also spelled as Ahnsahnghong) in Korea, believes it is “the only true church which God has established on this earth” [Rev. Joo Cheol Kim, official website].

Theologically, the movement is a cult of Christianity. Those involved in it this church are considered heretics instead of Christians.

Sociologically the movement has cult-like elements as well.

The cult tries to stifle criticism with a nondisclosure agreement, but that no longer works:

A nondisclosure agreement used by a Ridgewood church, described by some former members as cult-like, to allegedly block its followers from leaking secret beliefs and practices has been nullified by two Superior Court judges.

Those practices allegedly include forced abortions, tax fraud and doomsday prophecies, according to Raymond Gonzalez, an former member of the World Mission Society Church of God, who claimed the agreement he had signed bound him to silence.

Under the decision, issued last week, Gonzalez and others can speak freely because language in the contract was “unconscionable,” the court ruled. […]

The World Mission Society Church of God cult attempts to discredit leading cult expert Steven Hassan by pointing out a negative review of one of his books — by a cult watcher associated with a ‘competitor.’

In doing so they ignore professional endorsements of Hassan’s work.

The World Mission Society Church of God […] was founded by Ahnsahnghong in 1964, when he left the Seventh-day Adventist Church. The church believes that he (referred to by his followers as Christ Ahn Sang-Hong) is the second coming of Jesus. Ahn Sang-Hong died in 1985, four years after he stated that the second coming Christ must preach the new covenant for 37 years in fulfillment of the throne of King David. Ahn Sang-Hong was baptized in 1948 and began preaching the new covenant Passover. Today, the leader of the church is Zang Gil-Jah, known to followers as the Heavenly Mother, and the General Pastor is Kim Joo-Cheol. Zang Gil-Jah usually appears in public wearing a traditional Korean hanbok. Over 70 percent of followers are women and Korean Americans are increasingly found among the new adherents. Its headquarters are located in Bundang, Sungnam City, Kyunggi Province, roughly an hour away from Seoul.[1]

Within South Korea, and elsewhere proselytizers introduce themselves (to foreigners) by asking whether the individual has heard of the Mother’s love, or of the Heavenly Mother.[2] The church believes that Korean resident Zang Gil-Jah is “God the Mother” (who they believe is referred to in the Bible as the New Jerusalem Mother) as well as that Ahnsahnghong is God the Father. The church regards that the earthly family system is a copy and shadow of the heavenly family system, consisting of a Heavenly Father, Heavenly Mother, and the spiritual brothers and sisters (humans). These unorthodox beliefs have led some to consider the church a cult.
– Source: Wikipedia entry, May 18, 2008 [Archived]. Links added by Apologetics Index.

Ahn Sang-Hong predicted the Second Coming of Jesus Christ in both 1967 and 1988. 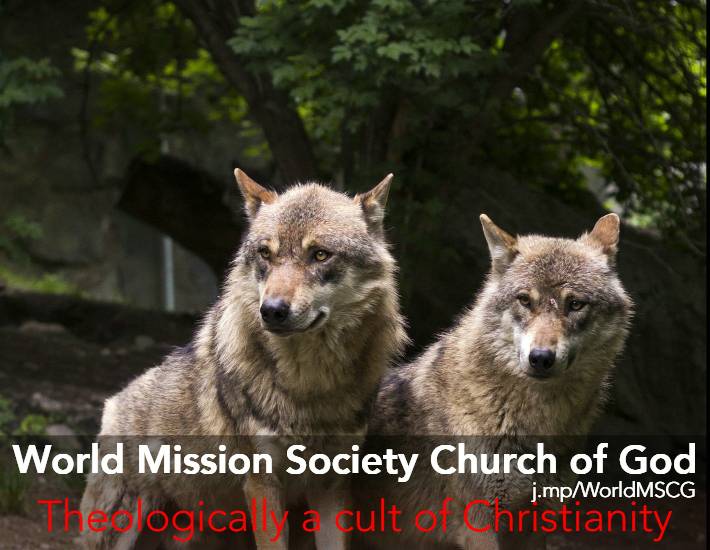 Theologically the World Mission Society Church of God is a cult of Christianity. It’s teachings and practices are outside the boundaries of the Christian faith. Therefore it’s leaders and followers cannot be considered to be Christians.

Theologically, the World Mission Society Church of God is a cult of Christianity — due to the fact that it changes, rejects and/or adds to the essential doctrines of the Christian faith.

Sociologically this movement has cultic elements as well. (See: theological vs. sociological definitions of the term ‘cult.’)

It should be noted that historically the Seventh-Day Adventist Church — itself a controversial religious movement that claims to be Christian in nature, but which promotes many doctrines that are contrary to the gospel and unorthodox in nature — has been a breeding ground of many other cults of Christianity.

I really hope this helps a lot of people to come out of this group and come to simple trust in the truth of Christ. God the Mother is unbiblical and irrational and this video will explain what the Bible teaches about God the Mother as well as respond to the teachings and theology of the World Mission Society Church of God and their worship of Zhang Gil-ja.

The following information was researched by the Immigration and Refugee Board of Canada:

In 1 December 2004 correspondence to the Research Directorate, a visiting assistant professor of Korean Christianity at the University of California at Los Angeles (UCLA) provided the following information:

“The Church of God” was founded by Ahn Sang-Hong in Seoul in 1964. He joined the Holiness Church in 1947 and believed [in] the imminent Second Coming of Christ. He left the church and made his own church, known as “Ahn Sang-Hong Witness Society.” He insisted that he was the incarnated Holy Spirit who was preparing [for] the Coming of Christ [for] the last time … After his death [in 1985], his spiritual wife and followers reorganized the Society into “The Church of God, World Mission Society.” Its main office is located in Bundang, Sungnam City, Kyunggi Province, about an hour away from Seoul.

According to the English-language version of the Church of God Website in Korea, followers believe “only the Bible as God’s word”; the teachings of Ahn Sang-Hong are believed to be “those of the last Christ” and they instruct followers to lead a “sacrificial life with true faith according to the Bible” (n.d.). The visiting assistant professor remarked that Church of God followers interpret the Bible literally, deify the founder, and consider images of the crucifixion and the Virgin Mary to be objects of idolatry (1 Dec. 2004). The assistant professor also noted that women are expected to wear a veil during service and that strict observance of the Saturday Sabbath and the rites of the Old Testament, such as Passover, is considered necessary to achieve redemption and salvation (1 Dec. 2004).

The Church of God claims to have grown rapidly since the late 1980s and to have 300 branches in Korea and abroad (Church of God n.d.). The visiting assistant professor of Korean Christianity, however, noted that information provided by the Church of God concerning the number of followers and congregations is “unreliable” (1 Dec. 2004).
– Source: Immigration and Refugee Board of Canada, cited at UNHCR Refworld

Next page: Prof Ji-il Tark on the World Mission Society Church of God