External circumstances and problems do not harm marriages, only arguments about these things do. Consider the Following:

You can never win an argument

1) Remember that the core of a person is their heart, and their mind is subordinate to the heart. People think and reason the way they want to. This is a universal phenomenon so don’t think it unusual or overreact when you see it in your spouse.

2) Once a person’s anger is stirred toward you, they have stopped listening to you. Stop trying to make them listen.

3) Once a person has put forth an argument in a heated debate their pride will not let them back down at that time. You will not be persuaded in the heat of the moment, nor will your spouse. It’s pointless to try.

4) Once an argument is underway, both parties tend to focus on winning vs. losing that argument more than they focus on truth or righteousness. Neither party is in a state conducive to humility, understanding, and reasonableness. Arguments are a form of irrational, temporary insanity in which both parties lose.

5) If you feel like you are about to deliver the winning point, the other party will just change the subject to one in which they think they are more likely to prevail.

6) Be careful about correcting your mate in public. Think before you do. If the correction would be embarrassing or humiliating to your mate, hold your thoughts for a more private setting. Embarrassing someone only angers them and makes them less likely to respond to your correction.

7) In any argument, you could be wrong in your points and you are certainly wrong in the way you are making them. The less you say in a heated disputation, the less you will have to take back and apologize for later. There is no real scoring of points in an argument.

In Spite of Your Emotions, Listen to the Other Party

1) Sometimes the other party may not be articulating their point well and the argument may be over a misunderstanding. Try to think through what the other person might mean by what they are saying. Be careful not to assume they intend the worst things their words can mean. When you are angry with someone you tend to assume the worst interpretation of their words and connotations. You cannot trust your own thoughts about the other person’s meaning and motives when your temper has flared.

2) If you think there is any truth or logic at all to any specific point the other person is making, be quick to concede that. Tell them they are right and you were wrong about that specific thing. This can help to diffuse an argument and restore a more reasonable atmosphere.

The Importance of Petty Things Gets Exaggerated During an Argument

1) If you let things cool down you will usually see that the issue is not worth fighting about.

2) One marriage counselor that I know says most marital problems that bring couples to counseling are trifles. In the grand scheme of things, how much do the things you are arguing about really   matter? Making mountains out of molehills is a sign of spiritual deficiency and pride. It isn’t just the other party who is doing this. It takes two people to argue.

It is a Sin to Argue

1) Nothing trumps this fact. You are disobeying God when you argue. You are sinning, however righteous you think your cause is.

2) This is the kind of situation that really tests your character. Character is only proven when you act against your emotions and inclinations in order to do what is right.

It is Foolish to Argue 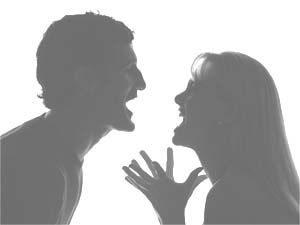 “Better is a dry morsel and quietness with it than a house full of feasting with strife.” (Proverbs 17:1 NASB)

“It is better to live in a corner of a roof than in a house shared with a contentious woman [or man].” (Proverbs 21:9 NASB)

“It is better to live in a corner of the roof than in a house shared with a contentious woman [or man].” (Proverbs 25:24  NASB)

Please do not see this as Solomon picking on women. Remember that he addresses his proverbs to a son (Proverbs 1:8 and throughout). Had he been speaking to a daughter “man” would be in the place “woman” is; thus I have added “man” in brackets.

Solomon is saying that harmony in the home is more important than its luxuries. Solomon places no aspect of married life above harmony. How foolish it is for us then, to sacrifice this most important, most pleasing, most rewarding part of marriage for some external matter that is far less valuable than the very high price you pay when arguing.

“Both husband and wife must mortify their pride and passion…For it is the diseased temeper of the heart that causes dissensions, more than the occassions or matter of offense do…Remember still that you are both [inwardly] diseased persons, full of infirmities; and therefore expect the fruit of those infirmities in each other; and make not a strange matter of it, as if you had never known of it before… If you could not bear this, you should not have married her; if you resolved that you could bear it then, you are obliged to bear it now. Resolve therefore to bear with one another; as remembering that you took one another as sinful, frail, imperfect, persons, not as angels, or as blameless and perfect .” — Richard Baxter 1