Do all things without grumbling or disputing. (Philippians 2:14 NASB) 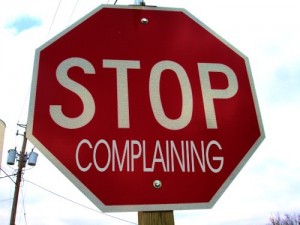 I have spent many years serving in the pastorate. I have consequently known a great many other pastors quite well. I have also worked as a teacher (sometimes as a second job while pastoring) and as a salesmen (mostly in high-end, home electronics and a little in mass-market home electronics). I think this life experience enables me to have a reasonably knowledgeable and objective perspective on the pastorate.

One exhortation I would offer to my fellow ministers is to stop whining about how hard the pastorate is. I have heard many pastors tell their congregations or put in writing that the pastorate is exceptionally stressful and hard on the family. I have heard that people are especially mean-spirited and abusive toward pastors and that the labor involved in the pastorate is especially taxing. Some pastors complain about all of the midnight phone calls they receive in what appears to be an attempt to elicit sympathy from their congregation. Seriously, just how many of these calls have you gotten in the past year, by the way? I am quite certain it is less than many owners of businesses that are open around the clock. Find one and compare notes with them.

Just between us — please stop complaining. I have been on both sides of the fence and I can tell you that most of the people in your congregation have lives just as stressful as yours. Their jobs demand much of them. They work very hard for long hours.Their customers mistreat them and lie about them. Their bosses are often unreasonable and rude.

When I sold high-end electronics I often went to work on my day off because there was not enough time in the work day to get all of the paperwork and preparation for deliveries done. I went to customers’ homes after work to help them through their problems with the gear they had bought (better that than lose the sale). My boss was an overbearing man who only knew how to communicate through insults, intimidation, and yelling. He rarely listened. I had customers lie about me, claiming I had promised them things I had not — in an apparent effort to get something for nothing. I had some customers cuss me out when I had done nothing but try my very best to serve them.

But this job was much more pleasant than my job as an English teacher. My first year of teaching I worked on lesson plans and grading around the clock, seven days a week, with only a break for meals, church services, and a few hours of sleep nightly — no exaggeration. I had parents yell at me for disciplining their kids and some students whose purpose in life seemed to be to make me as miserable as possible. The combination of overwork, stress, abuse, and sleep deprivation was more burdensome than anything I have seen any pastor endure (and I have known many).

I worked very hard in the pastorate and it was burdensome at times. But just between us, it was no more so than my work as a salesman and definitely less so than my work as a teacher. Most pastors who complain about the especially burdensome nature of the pastorate have been out of touch with the secular, work world so long that they think others’ jobs are not tiring or stressful like theirs.

It might do us all good to work as a policeman for a year or two. There is probably no job more taxing on family life. Perhaps we should all be required to serve a tour of duty in the military. Soldiers suffer complete separation from their families and frequently stark conditions. Their commanding officers do not communicate in gentle tones and the public they deal with is literally trying to kill them every day. They lose their friends in battle and are expected to press on. They are awakened in the middle of the night by the sound of hostile gunfire and exploding bombs aimed at them. Funny thing is, I cannot recall hearing any of them complain about it. They knew what they were getting into when they enlisted and the ones I have spoken to counted it an honor to serve their country. How do you suppose they feel inside when you grumble about the stress of the pastorate?

If you feel sorry for yourself and don’t like the pastorate, then quit. Get a different job. But please, please stop whining.