Word of Faith Movement at a Glance

Some Opinions on the Word-Faith Movement

There are many strong — and strongly-worded — opinions on this movement.

Much of the criticism is based on the research of Daniel R. McConnell whose 1982 thesis, Kenyon Connection, was published as A Different Gospel (1988). According the McConnel, Kenyon got his doctrine from the metaphysical cults, Hagin plagiarized Kenyon and fathered the Faith movement.

There are many peculiar ideas and practices in the Faith theology, but what merits it the label of heresy are the following:

Evangelical author Dave Hunt in 1985 published The Seduction of Christianity, an exposé of what he viewed as the infiltration of cultic ideas into Christianity — a seduction that “will be instrumental in bringing about the great apostacy that he believes will decimate the church and prepare for the coming of the Antichrist.” 11

Written from a cessationist‘s point of view, John MacArthur’s book Charismatic Chaos, published in 1992, addresses all groups and doctrines which embrace the modern use of tongues, prophecy, signs and wonders, miracles, and faith healing.

Word-Faith teachers owe their ancestry to groups like Christian Science, Swedenborgianism, Theosophy, Science of Mind, and New Thought–not to classical Pentecostalism. It reveals that at their very core, Word-Faith teachings are corrupt. Their undeniable derivation is cultish, not Christian. The sad truth is that the gospel proclaimed by the Word-Faith movement is not the gospel of the New Testament. Word-Faith doctrine is a mongrel system, a blend of mysticism, dualism, and gnosticism that borrows generously from the teachings of the metaphysical cults. The Word-Faith movement may be the most dangerous false system that has grown out of the charismatic movement so far, because so many charismatics are unsure of the finality of Scripture.
– Source: John MacArthur, Charismatic Chaos, p. 290

Also in 1992, William L. DeArteaga, who describes himself as a “Christian historian and expert on revivals and the rebirth and renewal of the Christian healing movement,” wrote Quenching the Spirit: Discover the REAL Spirit behind the Charismatic Controversy. The book is a defense of what he considers as the “move of God” as expressed in the controversial revival movements of the Toronto Blessing, the Brownsville Revival, and the “prophetic movement.”

Hank Hanegraaff, the controversial leader of the Christian Research Institute, reiterated much of McConnell’s thesis in his book Christianity In Crisis (1993) — “a landmark book … that confronts head-on a deadly cancer that is ravaging the body of Christ”. 12 While copiously annotated and documented, the book suffers from a sensationalistic tone.

Three years later DeArteaga published a revised version of Quenching the Spirit that includes a response to Hanegraaff’s book. He acknowledges that there are some doctrinal problems in the Word-Faith movement, but just as in the earlier book he vilifies and condemns those who reject the movement and the “move of God” as Pharisees.

The most balanced approach to the Word-Faith movement is The Word-Faith Controversy: Understanding the Health and Wealth Gospel, by Christian apologist Robert M. Bowman Jr. Published in 2001. Bowman notes:

The faith-healing and prosperity-gospel aspects of the movement are what give it both its intense appeal to many and its extreme notoriety to many others. What most people do not know is that the “health and wealth” promise is merely the tip of the theological iceberg. It is the teachings about faith, words, and confession — and what these teachings in turn imply about God, human beings, Jesus Christ, and the nature of the Christian life — that have turned out to be the most controversial aspects of the Word-Faith movement. […]

• Sweeping generalizations about the Word-Faith movement as cultic or heretical fail to take sufficient stock of the diversity within the movement.

• The Word-Faith teachers’ views on healing and prosperity are actually the least problematic aspects of their distinct theology. In significant ways their views, while troublesome, are more moderate than those of their predecessors in the faith-cure and early Pentecostal traditions.

• The popular characterization of the Word-Faith teaching as a “gospel of greed” hawked by religious con artists is generally an unfair caricature applying only to certain teachers on the fringe of the movement.

• While the errors of the Word-Faith movement are largely rooted in problematic elements of the Pentecostal tradition, a theologically sound form of Pentecostalism has emerged that rises above those weaknesses.
– Source: Robert M. Bowman Jr. The Word-Faith Controversy: Understanding the Health and Wealth Gospel, preface

Bowman documents that the faith movement presents greater complexity than most of its critics acknowledge.

Published in 2001, The Word-Faith Controversy was the result of 15 years of research into movement. In the preface he relates that, during a panel discussion at the 1994 annual conference of the Evangelical Ministries to New Religions (EMNR), he “could not come up with an intelligent-sounding technical term with which to categorize the movement.”

Instead I found myself giving the rather inelegant answer that the Word-Faith movement was a mess. It is, I explained, neither soundly orthodox not thoroughly heretical. It could not be categorized without qualification as either Christian or cultic. 13 Some of the leaders did teach some heretical ideas, but none of them seemed to advocate those heretical ideas consistently, and most people in the movement did not embrace those heresies.
– Source: Rob Bowman, The Word-Faith Controversy, Preface

Unlike many Word-Faith critics Bowman does not stereotype and attack the movement based on the most outlandish teachings of it’s most radical proponents — pointing out that many Word-Faith believers themselves also reject such off-the-wall teachings.

Instead he looks at the movement as a whole. He first traces the roots of the faith movement, documenting why Kenyon’s theology was not simply recycling New Thought, “a ‘baptized’ version of metaphysics,” as McConnell put it. He then shows that real roots of Kenyon was instead influenced mostly by evangelical faith-cure and early Pentecostal movements.

The final two-thirds of the book consists of a point-by-point examination of the Word-Faith movement’s most prominent teachings.

Bowman presents his case in a with clarity and logic, as well as with kindness and respect, insisting that the movement is “neither soundly orthodoxy nor thoroughly heretical.” He maintains that Word-Faith movement “as a whole should be classified as aberrant or suborthodox 14, while at the same time recognizing that at least some of the leading teachers of the movement do teach heresy. 15

He explains why he holds this opinion:

First of all, none of the of the Word-Faith teachers explicitly rejects orthodox doctrines. […]

Third, … the Word-Faith movement is a radical wing of an orthodox tradition. […]

Fourth, the Word-Faith movement teaches patently unbiblical ideas about the nature of God, the nature of human beings, and the person and redemptive work of Jesus Christ. […]

Fifth, some of the Word-Faith teachers have espoused blatantly heretical and even blasphemous ideas. 16 […]

Finally, … the Word-Faith teaching is demonstrably detrimental to a sound Christian life, though in varying degrees.

I believe that we should draw the following conclusions about the Word-Faith movement:

Apologetics with Gentleness and Respect

‘Apologetics’ is the branch of Christian theology concerned with the intelligent presentation and defense of the historical Christian faith.

The word is derived from the Greek “apologia,” a legal term meaning “defense” — and translated in some Bible versions as “answer.”

Always be prepared to give an answer to everyone who asks you to give the reason for the hope that you have. But do this with gentleness and respect, keeping a clear conscience, so that those who speak maliciously against your good behavior in Christ may be ashamed of their slander.
– Source: 1 Peter 3:15-16, NIV, Emphasis ours.

But regardless of who we interact with — Christians or non-Christians — we must engage them with gentleness and respect.

This Biblical command is often ignored by those who address the erroneous beliefs of Word-of-Faith proponents. You don’t have to search long in, say, YouTube to find examples of Christians trying to confront false teachings with and attitude of rudeness and ridicule.

It is good to be clear, honest and straight-forward in addressing errors and communicating truth. But if we do so without love — which results in gentleness and respect — we are not doing ourselves nor our audience any favors.

Christians who wish to help others understand and repent from the errors of the Faith message would do well to read 1 Corinthians 13 — and to act accordingly.

Video documentary on the Word-Faith movement

This video, produced by Keith Thompson of Reformed Apologetics Ministries documents the errors and origins of Word-Faith teachings. Includes many examples quoted from the movement’s leading proponents. (Note that Thompson does at the end recount McConnell’s views regarding the movement’s origins).

Research resources on the Word-Faith movement

For material dealing largely with individual preachers within this movement see our topical index.

The Word of Faith Movement entry was written by Anton Hein, founder and team member of Apologetics Index.

He and his wife, Janet, live and work in Amsterdam, Netherlands. Anton builds and maintains websites, while Janet — a licensed mental health counselor — works with an organization that provides counseling, shelter, legal- and other practical help to abused women and men.

Their Christian ministry is based on their understanding of grace and mercy.

When he isn’t tinkering with websites, cooking something spicy, or reading anything and everything, Anton — who enjoys street photography — can be found wandering the streets of Amsterdam (and, er, researching quality coffee houses). 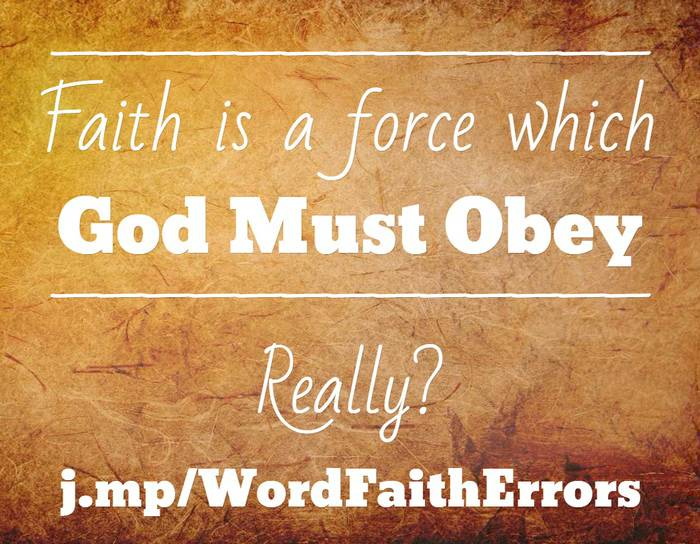 You are welcome to share this graphic on your website or blog. You can link it to https://apologeticsindex.org/4914-word-faith-movement