The Pew Forum on Religion & Public Life has published a report titled, "A Portrait of Mormons in the U.S."

The report, using data from its own 2007 U.S. Religious Landscape Survey, is of interest to anyone researching religions, religion trends, and the Mormon Church in particular.

But we do take issue with the fact that the report lumps the Mormon Church in with what Pew refers to as "other Christian traditions."
[Continue Reading...]

Joseph Smith, founder of the Mormon church, described plural marriage as part of "the most holy and important doctrine ever revealed to man on earth" and taught that a man needed at least three wives to attain the "fullness of exaltation" in the afterlife. While the Mormon church eventually rejected this doctrines, Mormon fundamentalists hold on to it. This documentary examines the legacy of Smith's teachings on polygamy.
[Continue Reading...] 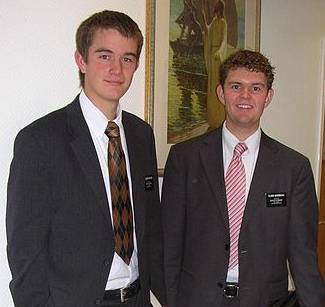 Latter-Day Saints missionaries are expected to abide by a long list of rules during their two years in the field.
[Continue Reading...]