Jayanti Tamm, an English professor at Ocean County (N.J.) College, is the author of “Cartwheels in a Sari: A Memoir of Growing Up Cult.”

In the book she describes what it was like to grow up in the cult led by the late Sri Chinmoy.

In a recent article she writes:

In the 1960s, the decade now mythic for its anti-conformity, flocks of people conformed to the dictates of self-proclaimed prophets.
[…]

[M]y hippie parents met their guru in 1968. Sri Chinmoy, based in New York, promised them enlightenment — if they obeyed his dictates. All they had to do was surrender their lives to him. To my trusting and vulnerable mother, and to my eccentric and contemplative father, the offer sounded like a bargain.

Arriving in the United States in 1964, Sri Chinmoy had vast ambitions. He aimed to infiltrate the United Nations, win a Nobel Prize and gain a worldwide following. His disciples were to lead austere, celibate lives, devoting themselves and their financial resources entirely to his mission. In 1970 when my mother became pregnant — a clear breach of the rules — the guru saved face by divining me as his chosen soul.

I was raised in the ashram of this man who declared himself an incarnation of God. Before I could walk, my parents dressed me in a sari and took me on their recruiting trips. Instead of acting in school plays and playing soccer, I distributed leaflets proclaiming the guru’s divinity from parade floats that wound through city streets. I spent summers scrubbing the cages of the zoo housed in the basement of the guru’s Queens home.


When Chinmoy wanted to attract more media attention, he staged elaborate weightlifting feats, hoisting elephants, helicopters and even Nelson Mandela and Mikhail Gorbachev — a smoke-and-mirrors spectacle I never understood. How could lifting elephants illuminate and ultimately transform the world? When I was a teenager, the guru’s strict rules banning all contact and relationships with the “outside” world provoked questions and longings for everything he forbade — college, career and family. When he told me to neglect the mind and forever remain in the heart “like a 7-year-old,” I finally realized that he was a narcissistic charlatan, shamelessly exploiting the faithful.

At 25, older than my parents had been when they renounced the world to serve the guru, I was formally banished, losing all my connections to the community I’d known since birth.
[…]
– Source: Cults reflect darker side of ’60s rebellion, Jayanti Tamm, The Detroit News, Aug. 25, 2009 (Originally published in the Washington Post)

In its review, Booklist writes, “Tamm never sensationalizes the facts, and her narrative restraint only intensifies the emotional impact of each incident. Witty, compassionate, and often heartbreaking, Tamm’s story offers crucial insight into a cult’s inner workings and methods of indoctrination.”

“The cult leader was a skilled manipulator, and Tamm’s descriptions of her internalization of his predation, constantly blaming herself for not feeling worshipful enough, are wrenching,” Publishers Weekly writes. “Tamm, now in her late 30s and a professor at Ocean County College in New Jersey, is unsparing in her account of the psychological damage Sri Chinmoy inflicted on her and her family, from her parent’s loveless marriage to her half-brother’s gleeful acceptance of the role of the guru’s enforcer. She reveals the difficulties in shaking off the guru’s influence–under which she had spent literally her entire life before her final expulsion — and though readers might wish to hear more about how she eventually regained her identity, the harrowing details of her story create a sense of emotional devastation that will linger.”

People who have spend time in cults (or in abusive relationships) will greatly benefit from the book, Captive Hearts, Captive Minds, listed below. 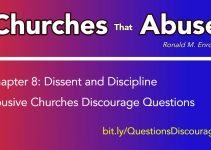