The E-meter is a device used by the ‘Church of Scientology‘ in a process called ‘auditing.’ 1

The only apparatus used in scientology is a small electric meter, housed in a wooden box measuring about 10 in. by 6 in. by 2 in. On its top side is a dial with a moving needle, some control knobs and a rheostat control termed the “tone arm.” It has two terminals, to each of which is attached, at the end of a lead, an electrode which is a steel or tin can, resembling, and sometimes actually being, a soup can. Within the box are small batteries and a transistorized circuit. The circuit is simple and is appropriate for apparatus designed to record or register electrical resistance, It is a variant of the Wheatstone bridge. The meter is called an “E-meter”, which is an abbreviation of the “electropsychometer” or “electrometer”. The E-meter has been improved and developed over the past fifteen years, and there have been five models, ranging from Mark I to Mark V. There is some suggestion that shortly there is to be a Mark VI model, and even another model which is to be used for auditing to OT.

When used in scientology auditing, the cans are held by the preclear, one in each hand, and the auditor, sitting opposite, faces the meter and records and interprets the readings on the dial, making various adjustments with the tone arm as the general level of resistance recorded by the meter rises or falls. The auditor writes down the various readings of the meter which are said to be correlated to whatever is being discussed by the auditor and preclear. The detail of such discussions is also written down.

It is claimed that emotions and emotionally charged thought can register electrically on the E-meter. When a preclear is “in session” and is holding the cans, questions which stir his emotions are said to produce a “read” on the meter. Hubbard and scientologists generally regard the E-meter as a most important adjunct to auditing, an almost indispensible tool.
– Source: The Anderson Report, Chapter 14, by Kevin Victor Anderson, Q.C., Australian government Board of Inquiry

According to the What is Scientology? book, based on the works of Scientology founder L. Ron Hubbard and compiled by the church’s staff, “a Clear is a person who no longer has his own reactive mind and therefore suffers none of the ill effects that a reactive mind can cause.”

Training levels are mostly attained by taking various courses through the church, which includes “auditing,” a type of therapy in which students have one-on-one counseling with a trained auditor. The auditing sessions range in cost from about $200 to several thousand dollars for 12 1/2-hour blocks, depending on the type of training, according to Margarita Davis, executive director of the Church of Scientology Ann Arbor.
(…)

The processing side of the bridge is based more heavily on auditing with a trained auditor using an Electropsychometer (known as an E-meter) that uses a small electrical current to measure the impact of different thoughts and emotions. The auditor then reads the change in the current on the meter to determine which thoughts and answers may cause concern for a person and should be addressed, according to What is Scientology?.
– Source: Classes offer Scientologists ‘Bridge to Total Freedom’, Battle Creek Enquirer, Feb. 25, 2001

None of the scientology theories associated with, or claims made for, the E-meter is justified. They are contrary to expert evidence which the Board heard and are quite fantastic and inherently improbable. Nothing even remotely resembling credible evidence was placed before the Board in attempted justification.
– Source: The Anderson Report, Chapter 14, by Kevin Victor Anderson, Q.C., Australian government Board of Inquiry. Highlighting added.

The device should bear a prominent, clearly visible notice warning that any person using it for auditing or counseling of any kind is forbidden by law to represent that there is any medical or scientific basis for believing or asserting that the device is useful in the diagnosis, treatment or prevention of any disease. It should be noted in the warning that the device has been condemned by a United States District Court for misrepresentation and misbranding under the Food and Drug laws, that use is permitted only as part of religious activity, and that the E-meter is not medically or scientifically capable of improving the health or bodily functions of anyone.
– Source: Part of the order issued by Judge Gesell in United States v. An Article or Device “Hubbard Electrometer.” et al., 333 F. Supp. 357 (D.D.C. 1971), which forbids the Church of Scientology and all related organizations from claiming to heal using an E-Meter. See Inside the Mark Super VII

In itself, the E-Meter does nothing. It is an electronic instrument that measures mental state and change of state in individuals and assists the precision and speed of auditing. The E-Meter is not intended or effective for the diagnosis, treatment or prevention of any disease.
– Source: What is the E-meter and how does it work? Caution: link leads to official Scientology website

Our opinion: The E-meter is part and parcel of the spiritual quackery that makes up Scientology. 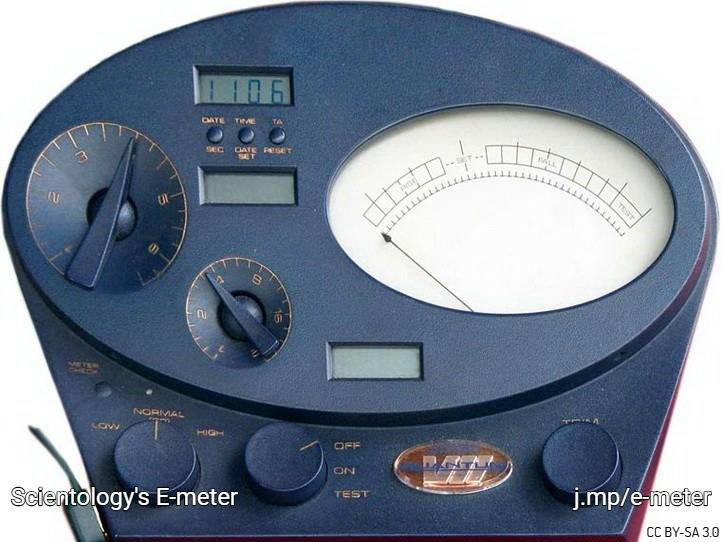 Photo of an E-meter, one of several models used by the ‘Church of Scientology’ in an unscientific ‘spiritual’ practice called ‘auding.’ Image, from Wikipedia, used under the Creative Commons Attribution-Share Alike 3.0 Unported license.