In the mid-1990s Driscoll was briefly associated with the Emerging Church, but claims he distanced himself from the movement

“because friends like Brian McLaren and Doug Pagitt began pushing a theological agenda that greatly troubled me. Examples include referring to God as a chick, questioning God’s sovereignty over and knowledge of the future, denial of the substitutionary atonement at the cross, a low view of Scripture, and denial of hell which is one hell of a mistake.” 1

He preaches a variety of Calvinism known as Modified Calvinism.

In 2011, Preaching magazine named Driscoll one of the 25 most influential [English-speaking] pastors of the past 25 years:

Reformed, emerging and controversial, Driscoll is a model for thousands of young pastors who read his books and listen faithfully to his podcast sermons. Driscoll may well be an example of how preachers will influence other preachers in the 21st century.

But there are many people who hope his influence will wane rather than grow.

In a statement, Mars Hills’ board of overseers said Driscoll hadn’t committed any acts of “immorality, illegality or heresy” — sins that have felled many a powerful pastor.

Instead, the board said, Driscoll is guilty of “arrogance, responding to conflict with a quick temper and harsh speech, and leading the staff and elders in a domineering manner.”

Driscoll was not asked to leave, the board added, saying they were “surprised” to receive his resignation letter.
– Source: Mark Driscoll, top megachurch pastor, resigns, CNN, Oct. 14, 2014

Senior pastor Mark Driscoll is taking an “extended focus break” of six weeks’ duration from his Seattle-based mega-church while charges against him are investigated by a process prescribed by church bylaws, Driscoll told the 8:30 a.m. Sunday service at Mars Hill Bellevue.

The controversial evangelical said he is meeting with “a professional team of sincere Christians” in evaluating his conduct. But Driscoll said he will not take to public media to answer “the criticism of me” and keep his expressions directed at the Mars Hill flock.

Update, August 22, 2014: A Brash Style That Filled Pews, Until Followers Had Their Fill.: “Mark Driscoll Is Being Urged to Leave Mars Hill Church”, New York Times.

… Mr. Driscoll’s empire appears to be imploding. He has been accused of creating a culture of fear at the church, of plagiarizing, of inappropriately using church funds and of consolidating power to such a degree that it has become difficult for anyone to challenge or even question him. […] Mr. Driscoll is rapidly becoming a pariah in the world that once cheered him.

All 21 pastors have left or been let go from the church. The 11-page complaint filed with the executive elders at Mars Hill alleges Driscoll’s abusive and intimidating behavior toward church leaders, staff and members.

Accompanied by a cover letter, briefs on workplace bullying and a summary of the powers of Mars Hill elders, the charges are being leveled by well-respected former pastors and are in the possession of the Mars Hill leadership. These documents greatly expand on charges brought by former pastor Dave Kraft. Those charges were dismissed by the Board of Advisors and Accountability. […]

…I want to point out that the pastors are concentrating on disqualifying actions since 2010.

Seattle megachurch pastor Mark Driscoll has been removed from a church-planting network of more than 500 churches he helped found after a pattern of “ungodly and disqualifying behavior.”
– Source: Sarah Pulliam Bailey, Religion News Service, published in the Washington Post, Aug. 8, 2014

“Ex-Mars Hill pastor Mark Driscoll is back on evangelical lecture circuit,” announces Joel Connelly in his May 1, 2015 blog post at the Seattle Post-Intelligencer.

Driscoll resigned as the senior pastor at Mars Hill on Oct. 15, 2014, as the church investigated charges by ex-elders and pastors that he had engaged in intimidating, threatening and profane behavior.

The charges of misconduct were later sustained, but the church never released a report of its findings on Driscoll.

Mars Hill announced two weeks later that it was dissolving. Individual congregations — which once totaled 15 in five states — were left to carry on as independent churches, combine with others, or dissolve.

Driscoll never really went away. He made a brief stage appearance at the 2014 Gateway Church Conference in Texas — which he had once been scheduled to keynote — complaining that he had been subject to repeated persecution.

As Mars Hill was dissolving last December, the ex-pastor has set up a website advertising his past sermons and lessons.

Driscoll is slated to appear this summer at another mega church gathering, the Hillsong Conference, in London and Sydney, Australia. He will be interviewed at both conferences by church founder Brian Houston.

Driscoll, who in 18 years built Mars Hill into a mega church is being advertised by Hillsong as “one of the most popular preachers in the world today.” But a petition drive has been mounted against his appearance.

Driscoll was not subjected to persecution. He got called out — finally — on his abusive behavior.

Mark Driscoll has started a new church in Phoenix, Arizona. Before doing so he has appeared as a speaker at a number of prominent events.

On February 1, 2016, Driscoll formally announced the launch of The Trinity Church.

The website is TheTrinityChurch.com. The church is named after Grace Driscoll’s home church in the Seattle area. So far, the church is a P.O. Box (see some pics here).

In what appears to be comparable to Mars Hill Church’s Board of Advisors and Accountability, Driscoll lists four pastors as providing “wise counsel”: Larry Osbourne, Randal Taylor, Jimmy Evans, and Robert Morris. These pastors have “apostolic gifting.”

The next day Throckmorton noted

The absence of Mars Hill Church from the bios and announcement of Mark Driscoll and his associates made an impression on those covering the news of Mark Driscoll’s planned launch of The Trinity Church.

The absence of Mars Hill from the bios and new church website only invites more investigation on the part of the media. The failure to tie up loose ends in Seattle may continue to haunt the Phoenix effort for quite awhile. And by loose ends, I mean financial disclosures about where and how much member and tither money was made by selling off assets. How much went to severance packages is a frequent question I hear. Furthermore, why did lawyers tell Sutton Turner not to reveal specific figures about Global Fund giving?

More importantly, there are former elders and members who are waiting to hear from the guy who is “healing up.” Be nice if everybody could heal up.

“Foulest mouth of any preacher you’ve ever seen”

Mark Driscoll appears to thrive on controversy, and has what the New York Times describes as the “foulest mouth of any preacher you’ve ever seen.” 2

“Who Would Jesus Smack Down? New York Times Magazine article about Mark Driscoll

Critics say that ‘cult of personality’ that surrounds Driscoll, and some wonder whether Mars Hill Church itself is — to some extend — a cult.

Have you been hurt at Mars Hill Church?

Read: Recovering From Churches That Abuse

Many describe what they have experienced at the church, and under Mark Driscoll, as spiritual abuse.

One recent article, published in April 2014 under the title, “Christian right mega-church minister faces mega-mutiny for alleged abusive behavior”, sums up a number of issues, including these ones: 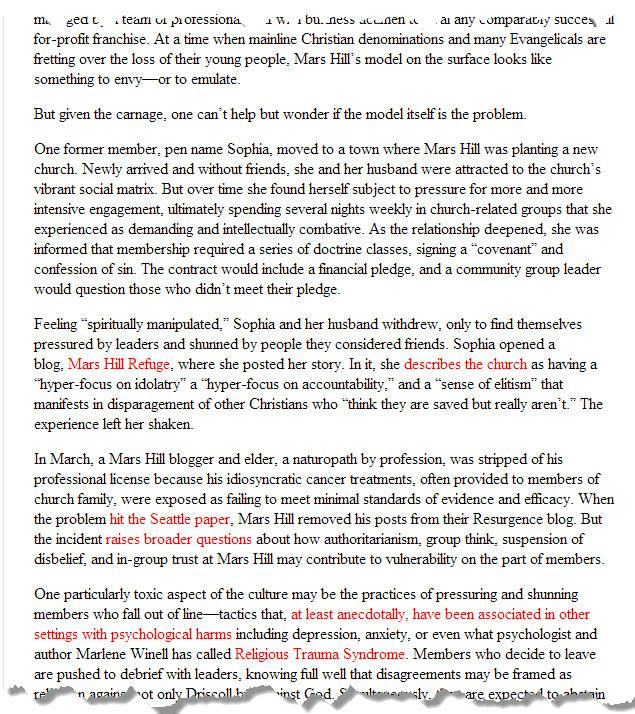 says the way Driscoll runs Mars Hill is “malicious, it’s spiritual abuse, it’s damaging to people’s lives, it’s jeopardizing the reputations of Christians–it’s already difficult in Seattle for people to take Christians seriously. Now we have to contend with this guy.” 3

Christians need to decide for themselves whether or not Mars Hill’s ‘modified Calvinism’ marks it, theologically, as a cult of Christianity.

While the publishers of Apologetics Index do not consider the church an outright cult, we do believe it is clear that — from a sociological perspective — Mars Hill Church includes some cult-like characteristics that are spiritually- and mentally damaging. 4

The person most responsible for making it so is Mark Driscoll.

In a recent video (July, 2014), Driscoll claimed, as Warren Throckmorton reports, “that the leaders of Mars Hill were having some difficulty knowing how to response to the latest crisis because many of those raising concerns about the church were doing so anonymously.”

This led a group of critics to set up a Facebook page titled, “Dear Pastor Mark & Mars Hill: We Are Not Anonymous.”

One of many people who remind Driscoll that he cannot hide behind the lie that his critics are anonymous is his former fellow associate pastor Ron Wheeler, Jr.

Wheeler’s heartbreaking blog post, “I. Am. Not. Anonymous,” clearly relates how damaging Mark Driscoll’s behavior is to people.

© Copyright Apologetics Index. All rights reserved. Links to this post are encouraged. Do not repost or republish without permission.