Theologically, the Church of Jesus Christ of Latter-day Saints (LDS, commonly known as the Mormon Church), is a cult of Christianity.

Its teaching and practices depart from Christianity’s essential doctrines to such an extent that the church and its members are considered to be outside the boundaries of the Christian faith.

Additional resources in our older entry on Mormonism

Mormonism and Excommunication (related: How to have your name removed from Mormon Church Records)

Other entries on Mormonism 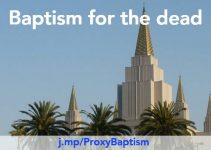