The term Cafeteria Religion, also known as Salad Bar Religion, denotes the trend in which people pick and choose religious beliefs, doctrines and practices – mixing and matching them much as they would select food in a cafeteria or at a salad bar. 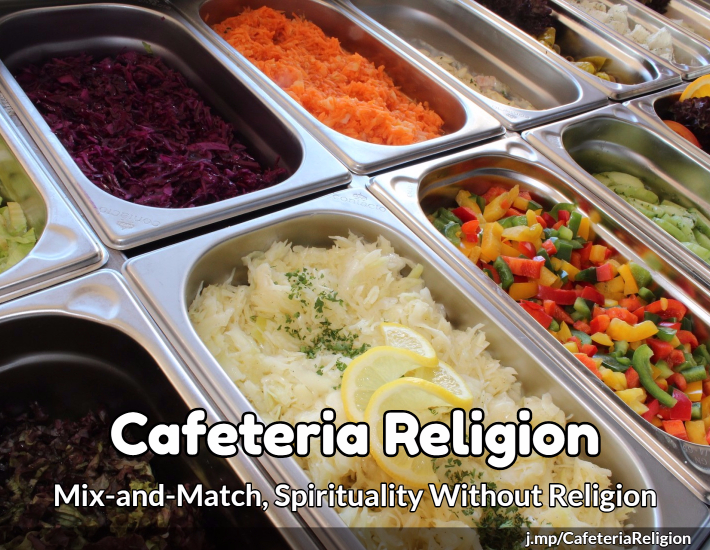 ‘Spirituality without Religion’ — Mix and Match beliefs to create your own ‘non-religious’ spirituality.

It would be more accurate to say, ‘spirituality without the boundaries of organized religion.’

Instead of subscribing to a given set of doctrines and standards of behavior associated with a particular religion, enthusiasts create a bespoke or customized religion to include only beliefs they feel comfortable with — often selecting teachings and practices from among a smorgasbord of religions and philosophies.

Many so-called ‘nones‘ — people who claim not to follow any religion — actually have cobbled together a Salad Bar Religion.

Scratch a self-described “None,” and commonly you will find someone who also reports praying and attending places of worship, even if he or she refuses to be identified with any particular church. To use the classic phrase of sociologist Grace Davie, this is believing without belonging.
– Source: Philip Jenkins, Church Going … Going … Not Gone …, Aleiteia, December 30, 2015

That is, in fact, very much in tune with religious pluralism.

Spiritual But Not Religious – a growing trend

When we talk about religion in America, we usually break the faithful down into familiar categories along political lines: a religious (usually evangelical Protestant) right and an atheistic left. But almost 20 percent of Americans, according to a survey released this week by the Public Religion Research Institute (PRRI) belongs to a category that transcends stereotypical religious identity.

As Protestant Christianity is said to be on the decline, a eclectic pick-and-choose spirituality appears to be especially appealing to those who reject their Christian upbringing.

Hence these terms often appear to be euphemisms for ‘spirituality or religion without Christianity.’

That said, cafeteria religion is not just popular among non-Christians, but also among people who identify themselves as Christians.

More often than not, the latter do not know how to discern orthodoxy from heresy.

Instead of acknowledging the boundaries of the Christian faith — the essential doctrines that make Christianity Christian and not something else — they reject absolutes in favor of a ‘That’s True For You, But Not For Me’ approach.

In so doing they have — deliberately or not — placed themselves outside the boundaries of the Christian faith, and from a biblical perspective can no longer call themselves Christians. A Christian, after all, is a follower of Jesus Christ — and not someone who makes up his or her own religion.

“It’s an eclectic approach,” said Lynn Garrett, who tracks religious books for Publishers Weekly. “People borrow ideas from different traditions, then add them to whatever religion they’re used to. But they don’t want anything to do with organized religion.”
[…]

Americans write their own Bible. They fashion their own God, then talk incessantly with Him. (Think here of President Clinton’s possessive pronoun: It’s between me, my wife and “our” God.) More often than not, the God they choose is more like a best friend who has endless time for their needs, no matter how trivial.

Scholars call this “domesticating God,” turning him into a social planner, therapist or guardian angel.
[…]

“We’ve trivialized God,” said Larry Crabb, a Christian psychologist and popular author. “Most of these books assume God is the butler who serves you for one reason,” he says of the list of current bestsellers. “To give you a happy life. We’ve turned Him into a divine Prozac.”
– Source: Believers In God, if Not Church, Washington Post, Jan. 18, 2000

A prime example of a cafeteria religion is the “church-free spirituality” promoted by Oprah Winfrey.

But the ‘what is true for you…’ approach is also rampant in the so-called Emerging Church, a movement in which many people reject objective truth in favor of relativism.

The result could be referred to as ‘Christianity Lite’ — the kind of happy-go-lucky, doctrines-do-not-matter gospel preached by the likes of Joel Osteen, or the money-focused (tel)evangelists of the so-called Prosperity Gospel.

A mishmash of beliefs betrays the absence of both sound doctrine and discernment. That leaves Christians wide open for false teachings and practices such as those taught within the New Apostolic Reformation — a movement in which modern-day ‘prophets’ and ‘apostles’ make up their own doctrines.

How to grow in discernment
What are the essential doctrines of the Christian faith?