It is lead by Lia Eden, a middle-aged woman formerly known as Lia Aminuddin.

Lia Eden claims to have had an encounter with the Archangel Gabriel, whom she refers to as the Holy Spirit, in 1995.

Ever since, she claims, she has experienced intense spiritual purification. She also claims to receive messages from ‘Archangel Gabriel.’

Newspaper reports sometimes state that Eden at times has claimed that she herself is Gabriel or the Holy Spirit. She also says her son is Jesus Christ.

She doesn’t appear to be quite sure. At one time on her official web site (which is no longer online), Lia has also stated that God declared her to be “Gabriel’s mate,” and that she is “the one God has declared as His heavenly incarnate on earth.”

His Majesty the Holy Spirit — an angel incarnate in Lia Eden — is represented in physicality by Lia Eden — Syamsuriati Lia Eden (Her Majesty the Sun Lia Eden), the Loyal and the Truthful.

Later she claimed to be the reincarnation of ‘Mother Mary.’

Among other revelations, Eden – who on her web site refers to herself in the third person – claims “God has revealed and consecrated Lia Eden as His judge in the world. She is the one unified with Gabriel and shall convey God’s judgement For all creatures and nations on Earth..”

Eden says that Gabriel told her to establish a multi-faith community named Eden/Salamullah. The purpose of the group is to spread channeled messages of “world judgement, Oneness and Peace from the Creator of Life.”

The community is said to consist of about 70 people. Its web site claims to be the “Official Site of Archangel Gabriel” as well as “The Holy Spirit’s Institution.” 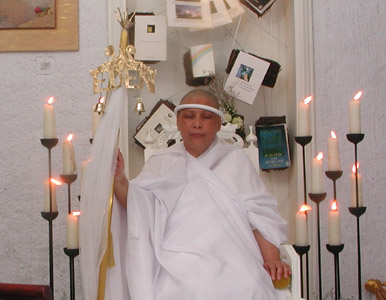 The White Throne
He is God Who has placed Lia Eden
on the white throne so simple
The White Throne, God’s kingdom on Earth
Accompanied with myriads of angels
radiating her with light of shade
Lia Eden took off all her adornment
Clad in a piece of white cloth of purity
Wearing a rattan crown of clarity from God
On her head
In her hand is a royal scepter of Eden,
the scepter of the Holy Spirit
Shone with candles of sacrifice
bringing God’s truth all over the world.
– Source: Lia Eden’s official web site, Photo Gallery

Here I am now on www.liaeden.info. I am here with the people who’re willing to listen to news from heaven and the hereafter. I, Gabriel, the Messenger of God, have come. I deliberately reside on the internet as myself. Here I am speaking and telling what God has revealed to me. Give me way to penetrate the virtual world, until you know the wills of God Most Beautiful.

Hey, don’t you all want to know about God from near you? Well, here it is, my website, the closest distance to God.

Love greetings from me.
The Archangel Gabriel
The Holy Spirit

The purifying process has been very hard and endless. During that time God declared Lia Eden as Gabriel’s mate, as prophesied in the previous holy scriptures. And God gave her a new name, Lia Eden, replacing the old name (Lia Aminuddin). And she is the one God has declared as His heavenly incarnate on earth.

Though the Eden Community, which meets in a house named “The Kingdom of God,” claims to be multi-faith, the group is regarded by locals as – theologically – a cult of Islam.

In December, 2005, thousands of locals surrounded the group’s meeting place. Police forcibly evacuated followers to prevent them from being attacked by the people, who claimed that Lia and her people were teaching heresies. 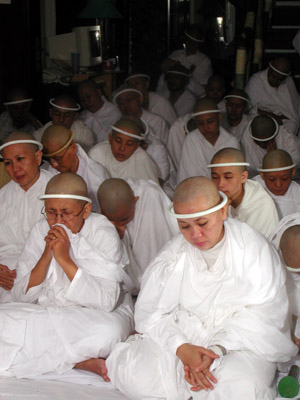 In a move that many saw as unnecessary, Jakarta Police declared on Thursday Lia Eden and 32 of her followers suspects for defamation of religion a day after members of the cult were forcibly evacuated from their headquarters on Jl. Mahoni in Senen, Central Jakarta.

Another 15 people also evacuated from the house by the police to prevent a clash with local residents on Wednesday were not named suspects because they were just participants in the gathering at the headquarters.

Jakarta Police Insp. Gen. Firman Gani added the police would charge members of the cult, known as Salamullah, under Article 156a of the Criminal Code on religious defamation.
[…]

Neighbors only become aware of the group after Lia, who claims to be the Holy Spirit, distributed flyers to her neighbors announcing that the house had become the Kingdom of God or Eden Palace on Dec. 5.

Several other flyers, including a clarification on a report that the cult’s teachings were heresy and an invitation to President Susilo Bambang Yudhoyono to the house, were also distributed to houses in the neighborhood several times after that.

“They never bothered or intimidated us before. Sometimes Lia’s followers went outside and we met them. However, they recently became active distributing several flyers to us. We just don’t like the content of the flyers. They should have kept their teachings to themselves,” Firdaus, 40, whose house is only 20 meters from Lia’s place, told The Jakarta Post.

He said that they considered Lia and her followers strange people with a different way of thinking.

Lia’s flyers, however, were responded to by members of the congregation of nearby Meranti Mosque, which also distributed flyers condemning Lia’s teachings as heresy, and asked residents to join a gathering in front of Lia’s house on Dec. 30.

Lia, who this time claimed to be God’s messenger Gabriel, responded with new flyers on Dec. 25, threatening to take the lives of the Meranti Mosque’s committee members if they held the gathering.