Deprogramming refers to an intervention process that reverses alleged brainwashing. 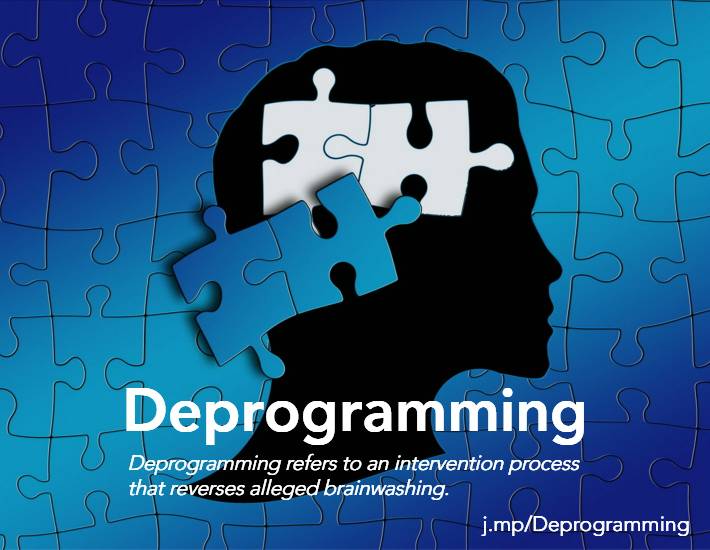 Deprogramming refers to an intervention process that reverses alleged brainwashing.

The term deprogramming has been used since the 1970s to refer to a range of behaviors, all of which are aimed at convincing members of so-called new religious movements (NRMs) to leave such groups and return to more mainstream social and religious lifestyles. Such groups might be “cultic,” that is, communal and with high-demand authoritarian leadership, or they may simply hold unconventional beliefs and rituals.
– Source: Anson Shupe, Deprogramming, Encyclopedia of religion, Volume 4, 2nd edition, Lindsay Jones, Editor in Chief, Macmillan Reference USA, 2005, pages 2291-2293

The process is controversial in that it historically involved coercion — usually including deception, kidnapping and holding a person against his or her will — in order to be able to present information that could help that person make an informed decision about further involvement with a particular indivivual, group or movement.

Confusingly, the term ‘deprogramming’ has been used — and continues to be used — in references to both voluntary and involuntary interventions.

The vast majority of cult experts (regardless of whether they operate from an anti-cult, counter-cult, or value-free perspective) have never engaged in involuntary deprogramming. Innstead they prefer voluntary Exit-Counseling or Thought Reform Consultation. 1

A small percentage of cult members leave their group or relationship by means of an exit counseling, an intervention similar to that done with someone who has a drug or alcohol abuse problem. These are planned meetings of the members, the family or friends, and a team of professionals who use an educational model to enable the member to reach an informed decision about here or his allegiance to the group.

In the 1970s increasing numbers of families became concerned with the role of cults in their children’s new and disturbing behavior: dropping out of school, cutting ties to families and friends, and sometimes disappearing completely. In this context, efforts at “deprogramming” emerged, which were early attempts to deal with what appeared to be a type of brainwashing used by the groups on their members. The term deprogramming was used to identify a process originally seen as the polar opposite of the cults’ “programming” of members.

Over time, as cults increasingly prevented outsiders, including families, from having access to members, deprogramming began to involve the actual abduction and forcible detention of the cult member in a locked room at home or in a motel or in whatever localed the deprogramming was taking place. Although initially not a coercive process, deprogramming is currently associated with ”snatching” and confinement of cult members by their families.

Although frequently successful in getting an individuals out of the cult or cultic relationship, this type of involuntary intervention can produce problems. Kidnapping and detention have been found to be traumatizing in their own right. Ex-members who have been deprogrammed report being highly ambivalent about the experience. Though grateful to their parents or spouse for getting them out of a cult, they sometimes also feel deep anger over the manner of the intervention. Post-traumatic symptoms such as nightmares, intrusive thoughts, and flashbacks of the deprogramming may also slow down their recovery from the cult experience.

We acknowledge the deep pain of families who feel there are no other alternatives to freeing their loved one from an abusive, restrictive cult or relationship, but we are opposed to deprogramming as a means of getting someone out of a cult. It may seem to be the only course of action, but there is danger of the family being misinformed and panicking. Many times, with patience, a way can be discovered and developed that will lead to a less traumatic exiting from the group.

As legal risks have increased and parents and most deprogrammers have become concerned over the ethical issues, new non-coercive means of helping cultists have developed. Deprogramming has been replaced by a more respectful approach, which is educational in nature, more professional in delivery, more effective in outcome and, because it is voluntary, generally nontraumatizing. This process, known as exit counseling, is described in Carol Giambalvo‘s book, Exit Counseling : A Family Intervention, important reading for anyone interested in learning more about this type of voluntary intervention. Professionals who help cult members make informed decisions about their group affiliations are known as ”exit counselors,” or ”cult information specialists.”

”Exit counselors are usually former cult members themselves,” writes Carol Giambalvo. ”They have firsthand experience with mind control. They have knowledge of cult mind-sets, they dynamics of cult membership, and the history of the particular cult in question and its leader(s). They also have the ability to bypass closed thinking brought about by mind control in order to re-access the cultist’s critical thinking abilities. These are vital areas of expertise.”
[…]

One advantage of an exit counseling is that participants receive a short course on cults and thought reforms along with the opportunity to learn howe their particular group or leader deviates from accepted moral practices or belief structures. They learn the origin of the group’s belief system, which may have been misinterpreted or kept hidden from them. This educational process provides them with an understanding of the true nature of their cult involvement. Armed with information and resources, and often backed up by an educated and supportive family environment, former cult members are more prepared to face the recovery process.

Caution! If you are considering the help of a lay- or professional cult expert, be aware of the fact that the title ‘Cult Expert’ is not protected. This is true also for related terms, such as cult specialist, deprogrammer, or intervention specialist.

Anyone can advertise him- or herself as one, regardless of ability, education, professional standards or peer review. Carefully research your options: How to Select a Cult Expert.