Table of Contents: Churches That Abuse

The full text of Churches That Abuse is published on Apologetics Index with the kind permission of the book’s author, Dr. Ronald M. Enroth.

Also online is the full text of the sequel, Recovering From Churches That Abuse.

Although Churches That Abuse has been out of print for several years, it continues to be a great resource for those who have been affected by various forms of spiritual abuse:

Ronald M. Enroth, Ph.D., is a leading scholar and resource on cults and cultism whose special perspectives are heartily welcomed by both the secular and the religious society.

Until his retirement in 2012 he was professor of sociology 1 at Westmont College in Santa Barbara, California.

The following description comes from the book’s front flap:

Churches That Abuse answers these and other important questions about abusive churches. This important new book warns and informs readers about the “fringe” churches and groups that operate in this country–organizations and churches that are not necessarily characterized by doctrinal deviation but have particular traits that make them behavioral and sociological outsiders. It also helps readers identify and beware of abusive tendencies in more “normal” Christian churches.

Ronald Enroth identifies what is meant by “abusive churches.” Then, he describes abusive churches, using the ten identifying traits of abusive churches: control-oriented leadership, spiritual elitism, manipulation of members, perceived persecution, lifestyle rigidity, emphasis on experience, suppression of dissent, harsh discipline of members, denunciation of other churches, and the painful exit process. Finally he shows readers how to discern fringe churches and offers several “red flags” that can be discerned when convention churches drift toward the fringe.

Churches That Abuse tells who the abusers are, how their techniques operate, and what the consequences are for marriages, small children, and teenagers. Where most books stop after reporting problem areas, this one continues and offers suggestions for those helping victims of abuse. And it can be read beneficially by those who are involved in abusive churches and have no one to turn to.

Endorsements for “Churches That Abuse”

When it was published, the book came with telling endorsements:

“It takes someone of Dr. Enroth’s stature and scholarship, as one of the most respected and recognized experts on American religious movements, to take the reader through the experiences of individuals, couples, and families from their first meetings with the various churches that will abuse them spiritually, psychologically, and financially and to let the reader see the inner state such abuse produces.This is the most sophisticated, in-depth presentation yet made of the psychological and spiritual consequences of what various pastoral and church-group abuse produce. Not only of value to the religious community, it will be of great use to psychiatrists, psychologists, social workers, physicians, and academicians. This is a book for those helping and those needing help. Timely, authoritative, and valuable. Gripping reading!”

The following endorsement were printed on the back of the book’s dust jacket:

“Churches That Abuse is a book which the Christian church has long been waiting for … a well-documented and invaluable exposure of spiritual abuses resulting from power-hungry leaders who use guilt, fear, and intimidation to control their churches. This is a most essential tool for the discernment so much needed today.”

“A much needed and singular volume of case studies related to churches which abuse their members. Having collected the testimonies of numerous persons who have departed from such abusive churches, Enroth has woven this material into a larger tapestry of interpretation of the characteristics and methods of abusive churches. This he has done with professional skill and pastoral concern.”

“We have been waiting a long time for such a book. It is a landmark event in this field and will be of immense value to former members of abusive groups, their families, and helping professionals.”

“A timely work. Enroth shows not only the individual crises suffered by abused believers, but the challenges these churches pose for the whole of Christianity. A very sobering and thought-provoking effort.”

“Enroth demonstrates convincingly that authoritarian preachers, who twist Scripture and pass themselves off as Spirit-filled men (seldom women) of God, unconscionably exploit the trust of sincere and credulous believers for their own selfish benefit. We can benefit much from this timely, informative, and helpful treatment of the problem.”

“In story after chilling story, Enroth reveals how authoritarian fringe churches mislead their flocks and inflict hard. Perhaps this book will prevent more potential victims from being ensnared by religion’s outlaws.”

For additional reviews, see the reader reviews at Amazon.com

The full text of Churches That Abuse has been placed online at Apologetics Index by kind permission from the book’s author, Dr. Ronald M. Enroth.

While this book is no longer in print, second-hand copies can often still be obtained via booksellers such as Amazon.com. 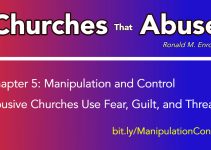