Table of Contents hide
1 Polygamous Community of Bountiful, BC, Canada
2 Inside Polygamy: Life in Bountiful

Polygamous Community of Bountiful, BC, Canada

Bountiful is a settlement in southeastern British Columbia, Canada. It is home to a branch of the Fundamentalist Church of Jesus Christ of Latter-Day Saints (FLDS) — the polygamous sect of Mormonism whose leader, Warren Jeffs, was jailed for life in August 2011 for sexually assaulting two underage followers he took as brides in what his church deemed “spiritual marriages.”

Tucked away in the shadow of fortress-like mountains of southeast British Columbia, the town of Bountiful has managed to somehow avoid the wrath of Canadian law for over 50 years despite openly practising polygamy.

Despite Canadian laws against the practice of plural marriage existing since 1890, Bountiful has managed to thrive, almost doubling its population to over 1,000 in the past decade. All are believed to be descendants of six men.

Winston Blackmore is the defacto religious leader of the town, despite being excommunicated from the Fundamentalist Church of Jesus Christ of Latter-Day Saints (FLDS) in 2002 following a power struggle with the sect’s prophet Warren Jeffs. Jeffs has since been jailed in Utah for being an accomplice to rape for forcing a 14-year-old girl to marry a 19-year-old.

Blackmore has rather openly defied Canadian laws, marrying over 25 women according to his first wife and arranging dozens of polygamous marriages in the town. While Blackmore hasn’t revealed the exact number of wives he has, he has openly admitted to having more than one wife.

But while Canadians see American authorities cracking down on the polygamous sect, such as the recent raid on Eldorado, Texas where over 400 children, including at least one Canadian, were taken into custody — there has not been similar action here.

She describes a world that seems impossible to comprehend existing in Canada: a government-funded school whose main mission is to “teach the supremacy of plural marriage and prepare students for marriage”; teenage boys allegedly used as cheap labour for Blackmore’s multi-million dollar companies; and of course, teenage girls being married off to much-older men.

Bramham has been one of the foremost critics of the B.C. and federal government’s policies ever since she received an angry email in April 2004, asking her why she was writing about the trafficking of Asian women but not the injustice against polygamist women in Canada.

In an interview with CTV.ca, Bramham puts the blame, among other things, on an over-emphasis on accepting all cultural practices under the guise of Canadian multiculturalism and a lack of political will.
– Source: Josh Visser, Polygamist Bountiful, B.C. thrives, despite the law, CTV.ca, Apr. 27, 2008

Inside Polygamy: Life in Bountiful 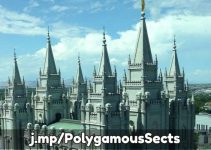