Produced by a former member of 22 years, “Witnesses of Jehovah” traces the history of the Watchtower organization.

Theologically, the Watchtower organization — represented by Jehovah’s Witnesses — is a cult of Christianity.

The film, which can also be bought on DVD, includes testimonies of former Jehovah’s Witnesses.

While somewhat dated — the film was first released in 1988 — “Witnesses of Jehovah” provides a good overview of the teachings and practices of Jehovah’s Witnesses and their organization. 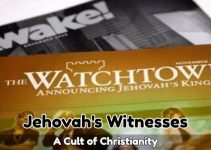