In Christianity, to discern is

[t]o identify the true nature of a spirit, doctrine, practice, or group; to distinguish truth from error, extreme error from slight error, the divine from the human and the demonic.
– Source: Robert M. Bowman, Jr., Orthodoxy and Heresy, Baker Book House, 1992, Page 115. 1

The two main Greek words translated as “discernment” are anakrino, meaning to examine or judge closely, and diakrino, to separate out, to investigate, to examine. 2

Christians should grow in spiritual discernment

The Bible teaches that all Christians should grow in spiritual discernment.

For though by this time you ought to be teachers, you have need again for someone to teach you the elementary principles of the oracles of God, and you have come to need milk and not solid food. For everyone who partakes only of milk is not accustomed to the word of righteousness, for he is an infant. But solid food is for the mature, who because of practice have their senses trained to discern good and evil.
– Hebrews 5:12-14, NASB

Do not quench the Spirit; do not despise prophetic utterances. But examine everything carefully; hold fast to that which is good; abstain from every form of evil.
– 1 Thessalonians 5:19-22, NASB

While he encouraged the Thessalonians not to discount or dismiss the Holy Spirit — by despising that which was being taught as coming from God (prophecy) — Paul instructed them to test everything.

In other words, if someone preaches or teaches something that he or she claims was inspired by God, we are not to despise it — which would result in “quenching” (extinguishing) the Holy Spirit.

However, we are to carefully examine that which is being taught.

Earlier, Luke called the people of Berea — where Paul and Silas had been sent to preach — “more noble-minded that those in Thessalonica,” because

they received the word with great eagerness, examining [anakrino] the Scriptures daily to see whether these things were so. Therefore many of them believed, along with a number of prominent Greek women and men.
– Acts 17:11-12, NASB

Thus the Bereans did not quench the Spirit, but rather tested what was being taught, using Scripture as their guide.

How to grow in spiritual discernment

Thus the Bible teaches that discernment is not optional — it is part and parcel of the Christian life.

The only way to grow in spiritual discernment is

a) by relying on the guidance of the Holy Spirit who indwells every true Christian, and
b) by stuyding God’s Word, the Bible.

One can not expect someone who has just accepted Jesus Christ as his savior to have a full, working knowledge of Biblical theology. The Bible indicates that people come to Jesus because the Holy Spirit draws them and they respond to His invitation.

When someone accepts Jesus Christ, he becomes regenerated (born again – a new person, spiritually). Among other things, he receives the indwelling of the Holy Spirit, which puts him at a great advantage over non-Christians. Paul puts it like this:

11 For who among men knows the thoughts of a man except the man’s spirit within him? In the same way no one knows the thoughts of God except the Spirit of God.
12 We have not received the spirit of the world but the Spirit who is from God, that we may understand what God has freely given us.
13 This is what we speak, not in words taught us by human wisdom but in words taught by the Spirit, expressing spiritual truths in spiritual words.
14 The man without the Spirit does not accept the things that come from the Spirit of God, for they are foolishness to him, and he cannot understand them, because they are spiritually discerned.
15 The spiritual man makes judgments about all things, but he himself is not subject to any man’s judgment:
16 “For who has known the mind of the Lord that he may instruct. – 1 Corinthians 2:11-16

The Bible provides the standard against which all teachings must be tested:

All Scripture is inspired by God and profitable for teaching, for reproof, for correction, for training in righteousness; 17 so that the man of God may be adequate, equipped for every good work.
– 2 Timothy 3:16-17, NASB

This reliance both on the guidance of the Holy Spirit and on God’s Written Word should keep Christians focused on God.

If Christians were to rely only on their ability to listen to the Holy Spirit, they would leave themselves open to all manner of private teachings and interpretations — without any rules by which to rest such revelations.

At the same time, it they were to rely only on their own ability to interpret and apply the Scriptures, they would leave no room for God’s guidance in revealing to them the riches of his Word.

As Christians our focus should always be on the living God, with whom we have an interactive relationship.

Relying on the discernment of others

No Christian is an island. There is much to be learned from one another, as we share the wisdom and insights God has revealed to us from His Word, by His Holy Spirit.

Sadly, though, many Christians leave the responsibility for discernment almost completely up to others. Their guidance comes primarily from televangelists, authors (and, more often than not, their ghost writers), their pastors, or their favorite websites.

That’s like being spoon-fed by someone else — marking one as an infant, rather than as a mature Christian:

For though by this time you ought to be teachers, you have need again for someone to teach you the elementary principles of the oracles of God, and you have come to need milk and not solid food. For everyone who partakes only of milk is not accustomed to the word of righteousness, for he is an infant. But solid food is for the mature, who because of practice have their senses trained to discern good and evil.
– Hebrews 5:12-14, NASB

One problem is that many Christians have ‘hero’ preachers and teachers whose teachings they will rarely, if ever, question. Once you put someone on a pedestal, it becomes difficult to examine — let alone question — his or her teachings.

Your favorite preacher or teacher may be a great orator or expositor, but he or she is still a fallible human being — just like you and me.

By all means, let’s learn from one another. But let us eagerly receive the word, while also examining everything carefully.

This approach — examining what people teach by searching Scripture — is an excellent way to learn sound doctrine.

Agreeing with and faithful to biblical teaching and to orthodoxy beyond a bare minimum, such that Christians may be encouraged to continue in this way. Contrasted with aberrational, which refers to orthodox teaching or practice which is only barely so. Its opposite, “unsound” may be used to express degrees of deficiency in soundness.
– Source: A Biblical Guide To Orthodoxy And Heresy, Christian Research Journal, Summer 1990, by Robert M. Bowman.

A failure to endure sound doctrine logically gives rise to unsound doctrine, and unsound doctrine in the professing church has historically led to critical perversions of God’s grace in Christ and the gospel itself.
– Source: Why make issues over doctrine? Morning Coffee with Gomarus [No longer online]

A church that teaches unsound doctrine — particularly when it militates against the essential doctrines of the Christian faith — usually is, theologically, a cult of Christianity.

Discernment as a spiritual gift

Christians who believe that the Spiritual Gifts are still available today, see the gift of ”distinguishing between spirits” (discerning whether they are human, from God, or demonic), to be a special form of discernment (revealed, instead of learned):

Some Christian apologetics and/or countercult organizations describe themselves as discernment ministries.

Does this sound familiar? “Do not touch God’s annointed.” “Do not judge.”

Discernment includes judging — a Bibilical practice many Christians are confused about.

Resources to help you grown in discernment

Janet and I, publishers of Apologetics Index, have taught many Christians how to grow in discernment. Among other things, which we will discuss at a later time, we recommend the following books: 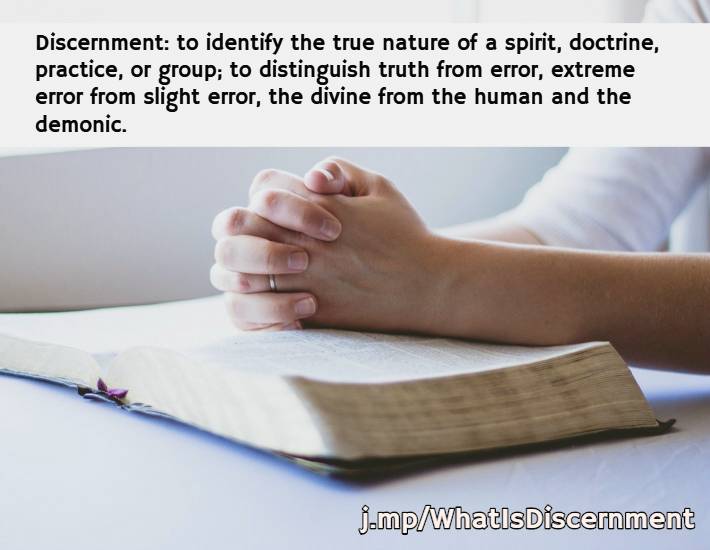 About Our Research Resources | Color Key 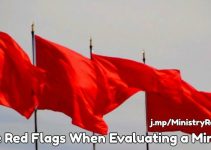