Home
Brainwashing
Brainwashing and Mind Control in Religious Cults and Elsewhere
Tweet Share Share WhatsApp Reddit Pocket
Used of cults, “brainwashing” or “mind control” refers to the unethical use of persuasion methods with the aim of recruiting people into joining or remaining involved with a group, movement, or cause.

[T]ranslation of a Chinese term indicating "a forcible indoctrination to induce someone to give up basic political, social, or religious beliefs and attitudes and to accept contrasting regimented ideas."
– Source: Webster’s New Collegiate Dictionary

This is also described to as Mind Control.

Sociologists, cult experts and others are sharply divided on this contentious issue. Some see brainwashing as a plausible explanation of why people join and remain in cults — or in other abusive relationships. 2

Others call it "junk science."

A more realistic approach to the issue is illustrated by Phillip Zimbardo, professor of psychology at Stanford University, as well as former and current president of the American Psychological Association (APA):


A remarkable thing about cult mind control is that it’s so ordinary in the tactics and strategies of social influence employed. They are variants of well-known social psychological principles of compliance, conformity, persuasion, dissonance, reactance, framing, emotional manipulation, and others that are used on all of us daily to entice us: to buy, to try, to donate, to vote, to join, to change, to believe, to love, to hate the enemy.

Cult mind control is not different in kind from these everyday varieties, but in its greater intensity, persistence, duration, and scope. One difference is in its greater efforts to block quitting the group, by imposing high exit costs, replete with induced phobias of harm, failure, and personal isolation.
– Source: Phillip G. Zimbardo, Ph.D., What Is The Message Behind Today’s Cults?, American Psychological Association Monitor, May 1997

While such psychological manipulation is a form of mind control, Apologetics Index does not hold the view that individuals who join – or remain with – cultic movements become irresponsible, mindless automatons, unable to think for themselves.

Rather, we regard Phillip Zimbardo’s view, quoted above, on this issue as realistic and responsible.

On the subject of brainwashing/mind control and related issue we recommend Steve Hassan’s books, Combatting Cult Mind Control, and Releasing The Bonds: Empowering People To Think For Themselves 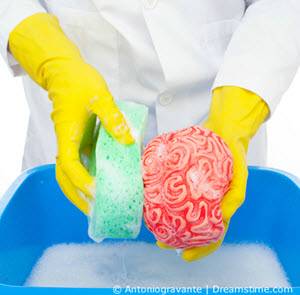 About the Controversies on ‘Brainwashing’ "Another catholic perspective (Considerations on the perspective of M. Introvigne)" by Raffaella Di Marzio

The Blacklisting of a Concept: The Strange History of the Brainwashing Conjecture in the Sociology of Religion.

Nova Religion, Oct. 1997. Subtitled "The Strange History of the Brainwashing Conjecture in the Sociology of Religion." By Benjamin Zablocki. Argues against polarization and for moderation among those who either support or deny the existence of brainwashing:

I am not personally opposed to the existence of NRMs and still less to the free exercise of religious conscience. I would fight actively against any governmental attempt to limit freedom of religious expression. Nor do I believe it is within the competence of secular scholars such as myself to evaluate or judge the cultural worth of spiritual beliefs or spiritual actions. However, I am convinced, based on more than three decades of studying NRMs through participant-observation and through interviews with both members and ex-members, that these movements have unleashed social and psychological forces of truly awesome power. These forces have wreaked havoc in many lives–in both adults and in children. It is these social and psychological influence processes that the social scientist has both the right and the duty to try to understand, regardless of whether such understanding will ultimately prove helpful or harmful to the cause of religious liberty.
– Source: Benjamin Zablocki, The Blacklisting of a Concept: The Strange History of the Brainwashing Conjecture in the Sociology of Religion, Nova Religion, Oct. 1997.

Social scientists seeking to debunk the brainwashing conjecture have often spoken as if extensive research has already been done on the behavior of cult participants and as if definitive conclusions could now be formed. And, indeed, there has been a great deal published concerning cults in the past ten years. However, a close examination of this vast quantity of writings shows that it is based upon a very skimpy body of actual data. Most of the best research that has been done consists of ethnographic monographs on single NRMs, and all of this remains to be synthesized. The few epidemiological or other comparative and quantitative studies have most often been based upon small sample sizes and unrepresentative samples. I also think some researchers have been naive in underestimating the ability of cults to put a favorable spin on research findings by "helping" social science investigators get in touch with subjects to be interviewed. At the other end of the spectrum, samples based upon psychiatric outpatient lists are similarly biased.
– Source: Benjamin Zablocki, The Blacklisting of a Concept: The Strange History of the Brainwashing Conjecture in the Sociology of Religion, Nova Religion, Oct. 1997.

Blind, Or Just Don’t Want To See? "Brainwashing," mystification and suspicion. Shows why and how some try to discredit ex-cult members and reports of brainwashing. By Alberto Amitrani e Raffaella Di Marzio, G.R.I.S.

Brainwashed! Scholars Of Cults Accuse Each Other Of Bad Faith By Charlotte Allen, in Lingua Franca, Dec. 1998.

Eight Marks of a Mind-Control Cult As outlined by Robert J. Lifton in Thought Reform and the Psychology of Totalism

Ideological Totalism A chapter from Robert Jay Lifton‘s book, "Thought Reform and the Psychology of Totalism: A Study of ‘Brainwashing’ in China." Lifton, a psychiatrist and distinguished professor at the City University of New York, has studied the psychology of extremism for decades. He testified at the 1976 bank robbery trial of Patty Hearst about the theory of "coercive persuasion."

Mind Control – The BITE Model From chapter two of Releasing the Bonds: Empowering People to Think for Themselves, by Steve Hassan

“Mind Control” in New Religious Movements and the American Psychological Association by Alberto Amitrani and Raffaella Di Marzio. Some scholars believe that brainwashing exists; others believe that it does not exist. And some have misrepresented the opinions on the matter by the ASA and APA.

The Mind Control Myth : Is Brainwashing All Wet? Utne Reader reports on the brainwashing debate.

Overcoming The Bondage Of Victimization A Critical Evaluation of Cult Mind Control Theories. By Bob and Gretchen Passantino, arguing against the concept. See a response below:

Overcoming The Bondage of Revictimization: A Rational/Emperical Defense of Thought Reform by Paul R. Martin, Ph.D., Lawrence A. Pile, Ron Burks, M.A. & Stephen D. Martin, M.Div., arguing for the validity of the Mind Control concept (in response to Bob and Gretchen Passantino’s article above).

Towards A New Model Of ”Cult Control” by Robert Vaugh Young

Various ”experts” can (and do) argue if ”mind control” or ”brainwashing” really exists or if we are just talking about various forms of ”influence” that is found in everything from advertising to conversations. But they can’t argue with the fact that there are battered/abused women who stay in abusive situations and there are women who flee and when found by the husband are talked BACK into the very relationship they tried to escape and then it repeats.
– Source: Towards A New Model Of ”Cult Control” by Robert Vaugh Young

Brainwash: The Secret History of Mind Control by Dominic Streatfeild

Behind the front lines of every war in the world, prisoners are forced to sit for interrogation: manipulated, coerced, and sometimes tortured–often without ever being touched. Brainwash is a history of the methods intended to destroy and reconstruct the minds of captives, to extract information, convert dissidents, and lead peaceful men to kill and be killed.

With access to formerly classified documentation and interviews from the CIA, U.S. Army, MI5, MI6, and British Intelligence Corps, Dominic Streatfeild traces the evolution of mind control from its origins in the Cold War to the height of today’s war on terror. Vivid and disturbing, Brainwash is essential insight into the modern practice of interrogation and torture.

Releasing the Bonds : Empowering People to Think for Themselves by Steve Hassan

Nobody joins a cult. You join a self-help group, a religious movement, a political organization,” Layton says. ”They change so gradually, by the time you realize you’re entrapped – and almost everybody does – you can’t figure a safe way back out.
– Source: Deborah Layton (survivor of Jim Jones’ Peoples Temple cult) quoted in Jonestown Survivors Remember, AOL/AP, Apr. 5, 2000

Thought Reform and the Psychology of Totalism : A Study of Brainwashing in China by Robert Lifton

» Google News Predefined Search. If current news is available on this topic, you will find it here.
» Religion News Blog RNB logs current and archived news about religious cults, sects, alternative religions and related issues.
Database of archived news items on brainwashing
(Includes items added between Oct. 25, 1999 and Jan. 31, 2002. See about this database) 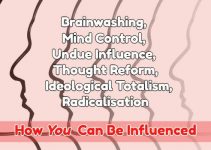