Ten Lies I Told as a Mormon Missionary by Loren Franck

As a full-time Mormon missionary from 1975 to 1977, I lied for the church countless times. Like my colleagues in the South Dakota-Rapid City Mission, which served the Dakotas and adjacent areas, I spoke truthfully about my background, but touted many Mormon teachings that contradict the Bible. After my mission ended, however, I examined these doctrines more closely. The harder I tried to reconcile the contradictions, the more evident they became. So, after extensive prayer and study, I resigned my church membership in 1984.

What the Mormon Missionaries Won’t Tell You

Most of us have had a Mormon Missionary knock at our door. If you have ever invited them in and listened to a presentation of their beliefs, you probably found most but not all of what they said very similar to those beliefs held by Christians. However, while trying to convince you that your Church is wrong and the Mormon Church is right, there are several points they intentionally leave out. Below is a list of Mormon beliefs the missionaries will be reluctant to tell you about:

Mormon Missionaries in the news 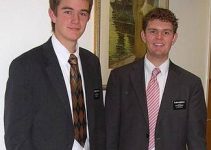