Home
William Branham
William Branham
A self-proclaimed prophet, William Branham ((April 6, 1909 — December 24, 1965) became a major influence in the Latter Rain Movement. In his teachings on Joel 2:23, he defined the "latter rain" as the Pentecostal Movement of his day.
Branham proclaimed himself the angel of Revelation 3:14 and 10:7 and prophesied that by 1977 all denominations would be consumed by the World Council of Churches under the control of the Roman Catholics, that the Rapture would take place, and that the world would be destroyed. He died in 1965, but many of his followers expected him to be resurrected, some believing him to be God, others believing him to be virgin-born.

Branham’s influence has continued in many churches where his prophecies are considered to be divinely inspired. His teaching on the power of the spoken word has been a characteristic of later revivalists. Kenneth Hagin identifies Branham as a prophet. 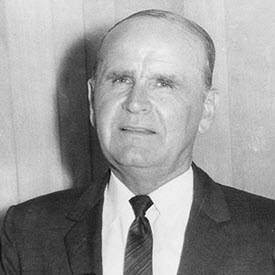 Al Dager notes:
In spite of his apparent humility and consecration, Branham had great difficulty controlling a strident, hateful attitude toward women. In his own poor English, transcribed from a sermon, Branham stated, "But I remember when my father’s still up there running, I had to be out there with water and stuff, see young ladies that wasn’t over seventeen, eighteen years, up there with a man my age now, drunk. And they’d have to sober them up and give them black coffee, to get them home to cook their husband’s supper. Oh, something like that, I said, ‘I…This was my remarked [sic] then, THEY’RE NOT WORTH A GOOD CLEAN BULLET TO KILL THEM WITH IT.’ That’s right. And I hated women. That’s right. And I just have to watch every move now, to keep from still thinking the same thing." (3)
Albert James Dager, Media Spotlight Vol 7., Nr.2 April – June 1986
Branham’s popularity was due mainly to his ability to discern people’s illnesses. Also, many healings took place at his meetings, but not as many as were claimed. (4)  While Branham’s services were powerful – "…a legend unparalled in the history of the charismatic movement" (5) – some question the source of his healing power:
Years ago (William Branham) told his interpreter, Pastor Ruff, "If my angel does not give the sign, I cannot heal." Ruff noticed several features of spiritism in the work of Branham, and therefore stopped working with him. These "angels" of whom (Harry) Edwards and Branham spoke are evil spirits masquerading as angels of light. As in many areas of the occult, we are here reminded again that the devil appears as an angel of light (2 Cor. 11:14) Another evidence is the fact that neither Edwards nor Branham were able to perform cures when faced with born-again Christians who had committed themselves to the protection of Christ. In the case of Branham, I have experienced this myself. When he spoke in Karlsruhe and Lausanne, there were several believers among the audience — including myself — who prayed along these lines: "Lord, if this man’s powers are from You, then bless and use him, but if the healing gifts are not from You, then hinder him." The result? On both occasions Branham said from the platform, "There are disturbing powers here. I can do nothing."
Kurt Koch, Occult ABC 1978, p. 235
D.R. MacConnell, in a book examining the Word-Faith Movement, includes the following footnote:
An example of the fallacy that signs and miracles validate one’s teaching is William Branham, one of the original and greatests evangelists of the post-World War II Healing Revival. Branham worked astounding miracles of healing in his crusades. To this day his gifts of supernatural knowledge of those to whom he ministered remains unparalleled, even among modern healing evangelists. Despite all of his gifts, however, Branham’s doctrine was always marginal at best, and towards to the end of his ministry, it became outright heretical. He denied the doctrine of the Trinity, teaching instead the "Jesus only" doctrine. He taught that he was the prophet Elijah, whose ministry would result in the return of Jesus. There were pockets of his followers who believed that he was not just a prophet, but also the incarnation of Jesus himself. Although Branham’s is an extreme example, it illustrates that a ministry of miracles and healing in no way proves soundness of doctrine.
D.R. McConnell, A Different Gospel, Hendrickson Publishers Inc., Peabody, MA, 1988. p. 166
Even today, many people idolize Branham. Many web sites contain one or more photographs in which a white spot near or above Branham’s head is claimed to be "the pillar of fire" or his "angel."
When Branham was baptizing 130 converts in the Ohio River, (allegedly) a heavenly light, like a blazing star, appeared above him just as he was about to baptize the seventeenth person … it has also been reported that a voice spoke from within the light, saying, "As John the Baptist was sent to forerun the first coming of the Lord, so you are sent to forerun His second coming…"
Andrew Strom, The Enigma of William Branham
Groups that adhere to Branham’s teachings meet under the name Bible Believers, Inc. Theologically, it can be considered a cult of Christianity. Aspects of the Latter Rain teachings are also being taught by some leaders and teachers of today’s controversial renewal and revival movements.

In the 50’s Paul Cain, who later headed the Kansas City Prophets, travelled with and ministered alongside William Branham. Cain called him "the greatest prophet that ever lived." Though he disagrees with Branham’s views on the doctrine of theTrinity, Cain very much promotes Branham’s equally heretical Manifest Sons of God teachings.

Over 50 years ago, William Branham, George Warnock, Paul Cain and others attempted to introduce Latter Rain/Manifest Sons of God teachings into the Pentecostal movement. In 1949, however, the Assemblies of God officially rejected the Latter Rain/ Manifest Sons of God doctrine as "heresy." The cult went underground but surfaced again in the 1960’s as the Manchild Company. Disregarding the Assemblies of God decision, Paul Cain, the Kansas City Prophets and Vineyard Ministries have subsequently reintroduced and successfully established this false doctrine in the Pentecostal churches.
The Latter Rain Revival by Tim Barbaho, 1997
– Footnotes –
Table of Contents hide
1 Videos
2 Research Resources
3 Articles
4 Websites

“Can we find salvation outside of the cult? Will our children be saved if we leave? Will we remain Christian after we make our exodus?” One of many videos provided by Seek Ye The Truth
Emily Arndt was raised believing that William Branham was a prophet sent by God for these “last days.” Through God’s grace she discovered that he was just one of many false prophets who have come with this same claim, yet the Bible clearly states that Jesus is the only one she needs (Hebrews 1:1–2). This is her story.

William Branham: Prophet of God? (Contra) Note: keyed grey as the site promotes KJV-onlyism and has a decidedly anti-Charismatic outlook.