Christian Science is also known as The First Church of Christ, Scientist. That title refers to the movement’s mother church in Boston, Massachusetts.

The church is sometimes confused with ‘Religious Science,’ or with the ‘Church of Scientology’.

Founder Mary Baker Eddy (1821 – 1910) described Christian Science as a return to “primitive Christianity and its lost element of healing.”

In her book Science and Health (1875) Eddy teaches that sickness is an illusion that can be corrected by prayer alone. The book became Christian Science’s central text, along with the King James Bible.

However, the movement neither represents science, nor Christianity. “Christian Science is like Grape Nuts; it is neither,” said Southwestern Seminary theology professor Dr. William Hendricks.

The Bible does not teach what Christian Science claims it teaches. See our research resources on faith healing. 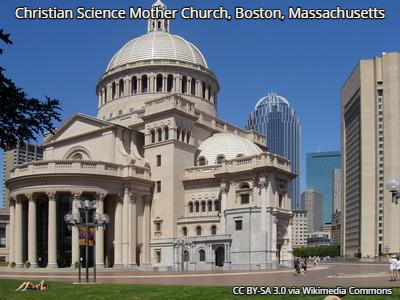 Christian Science rejects and/or redefines key doctrines of the Christian faith, including those on the trinity and on the deity of Christ.

While it uses Christian terminology it completely reinterprets those terms.

For instance, in Christian Science:

While she claimed that “the Bible has been my only authority,” 2 Mary Baker Eddy also taught the Bible was corrupted, and said that Science and Health is the “first book” which has been “uncontaminated by human hypotheses.” 3

Therefore, though the movement claims to be a return to early Christianity, Christian Science is theologically a cult of Christianity.

In many U.S. states the Federal Government has granted Christian Science religious exemptions which, in the eyes of many, has led to needless suffering and preventable deaths.

In the 1970s, Idaho, like numerous other states incentivized by the federal government, enacted a religious exemption for parents who believe in faith-healing. The federal government was responding to pressure from the First Church of Christian Science, and no one seems to have grasped that children could and would die from such an exemption. The only explanation I can offer is that was part of the Pollyanna era of American history when everyone believed at some level that religious believers wouldn’t harm a child.

Such exemptions open the door to the deaths of children from ailments with known and tested treatments, from food poisoning to diabetes, pneumonia, and leukemia. The Church of the First Born and the Followers of Christ are two of the most ardent believers against medicine, and at one time, they populated Oregon, where prosecutors discovered in the 1990s to their horror that they could not prosecute them for the preventable deaths of children. Since then, Oregon has dramatically narrowed its medical neglect exemptions and prosecuted some of the worst cases, with a major manslaughter conviction in 2014.

While Oregon finally made strides in protecting its children, the number of deaths in Idaho escalated. Why? Because Idaho has created a legal paradise for believers in faith alone.
– Source: Marcia A. Hamilton, How to Craft a Religious Exemption Regime Guaranteed to Be Dangerous for Children: The Case of Idaho Verdict, February 19, 2015

[Slated to be expanded]

Tragedy in the Church of Christ, Scientist. BBC documentary from the series, Heart of the Matter, with Joan Bakewell.

More children die because of faith-based medical neglect in Idaho than in any other state. The combination of Idaho’s terrible laws and several congregations with religious beliefs against medical care has cost the lives of hundreds of children. Only eight other states have a statutory religious exemption from manslaughter or negligent homicide of a child.

The main sect in Idaho with beliefs against medical care is the Followers of Christ. Others are the Church of the Firstborn and the Christian Science Church. The Followers and Firstborners have similar historical roots and congregations in Oregon who have also lost children because of medical neglect. After Oregon repealed its religious exemptions in 2011, some Oregon Followers have reportedly moved to the safe haven of Idaho where faith-based medical neglect of children is legal.
– Source: Child faith deaths in Idaho. Links added.

This entry on Christian Science is an update of an earlier version. This page is maintained by Anton Hein, co-publisher of Apologetics Index.

We encourage independent research using material from a variety of perspectives.