The Church of Scientology is the subject of a much-anticipated Alex Gibney documentary, “Going Clear: Scientology and the Prison of Belief.”

The doc, which takes a look at the ‘church’ and some of the many high-profile members who have recently left the cult, made its premiere at the Sundance Film Festival, on January 25, 2015 — to rave reviews.

The film is based on the book “Going Clear: Scientology, Hollywood, and the Prison of Belief” written by Lawrence Wright, who is a producer of the documentary.

Like Mr. Wright’s book, the documentary depends heavily on interviews with Scientology dropouts whose filmed accounts mostly track with earlier descriptions of claimed abuse, both physical and emotional, that were compiled by Mr. Wright.

Their impact is enhanced by the power of film, however.

“In the book, you have to take my word for it,” said Mr. Wright, who will join the film’s promotion at Sundance. “In the documentary, you get the chance to judge for yourself.”
– Source: New York Times, Documentary Draws Ire From the Church of Scientology January 15, 2015

In what is seen as a risky move, the ‘church’ launched a furious attack even before it was shown at Sundance:

On Friday, the Church of Scientology is expected to strike out at the movie — which its members and leaders have not yet seen — with full-page newspaper advertisements in The New York Times and elsewhere detailing what it says are journalistic lapses by Mr. Gibney.

In a pointed reference to a much-challenged magazine article about a campus rape at the University of Virginia, the ads ask whether the movie, called “Going Clear: Scientology and the Prison of Belief,” is “a Rolling Stone/UVA Redux.”
– Source: New York Times, Documentary Draws Ire From the Church of Scientology January 15, 2015

Scientology has a long, dark history of such attacks — including hate- and harassment activities based on policies developed by the cult’s founder, L. Ron Hubbard.

And, as the Daily Mail notes, the cult continuous to lash out:

The Church of Scientology has launched a full-scale assault on a new HBO documentary about the controversial religious sect, specifically targeting its Oscar-winning director and claiming that his late father – an acclaimed journalist – published CIA propaganda.

In more than 200 tweets, the church has tried to discredit Alex Gibney and his sources in ‘Going Clear: Scientology and the Prison of Belief’, which premiered at the Sundance Film Festival last month.

It has also issued a statement on the website of Freedom Magazine, its news publication, claiming the documentary is ‘propaganda’, ‘one-sided’, full of ‘false information’ and features ‘vengeful’ sources.

Again, typical behavior for the ‘church.’

But HBO, at least, is well-prepared:

The film, which is expected to feature new revelations about the controversial religion and its famous followers Tom Cruise and John Travolta, almost certainly will draw an aggressive response from the notoriously litigious church.

As mentioned, Scientology’s behavior — self-destructive as it is — is based on the fantasies and policies of the cult’s founder, L. Ron Hubbard.

“Dead Agenting” is Scientology jargon for an unethical policy instituted by L. Ron Hubbard, the cult’s founder, in which Scientologists attempt to discredit critics.

D/A, verb. Dead Agent; to spread malicious lies and rumors about an Anti-Scientologist person or organization, in an attempt to so thoroughly discredit them that everyone concerned will be disgusted with them, and not listen to the information they have to give about the cult.

Many attempts to Dead Agent the recently destroyed CAN (the Cult Awareness Network) and FACTnet (Fight Against Coercive Tactics network; a BBS that supplies information about the cult) have been posted to ars (alt.religion.scientology)
– Source: ARS Acronym/Terminology FAQ

Outside Scientology, Dead Agenting would be referred to as negative public relations (aka Dark Public Relations, Black PR, or Black Propaganda).

Dead Agenting is related to the cult’s so-called ‘Fair Game’ policy, which describes how to deal with critics and ex-members.

ENEMY   SP Order. Fair game. May be deprived of property or injured by any means by any Scientologist without any discipline of the Scientologist. May be tricked, sued or lied to or destroyed.
– Source: Hubbard Communication Office, Policy Letter of 18 October 1967, Issue IV

These policies are carried out by members of Scientology’s “Office of Special Affairs” (OSA). 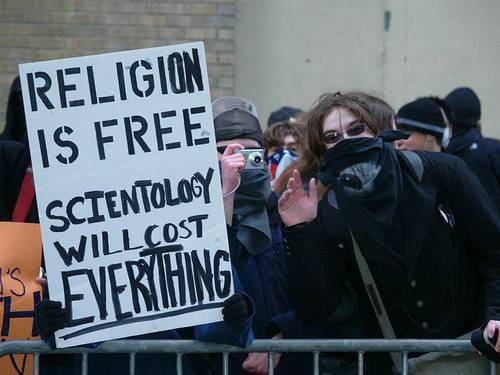