With Gallup polls consistently showing 82 percent of Americans saying that they are spiritual seekers and 52 percent saying that they’ve talked about spiritual issues in the previous twenty-four hours, it is important to understand how popular culture influences our spiritual journeys and quests for truth and meaning in our lives.

If to be savvy means “to get it,” the four dynamics of today’s popular culture that we need to “get” are its general superficiality, its soullessness, its powerful influence, and its spiritual delusions.
[…]

Today’s superficial popular culture is symptomatic of our human malaise, and technology, marketing, and the lust for profits simply spread our addiction and disease faster and further. For the first time in history, it is possible for entertainment culture to distribute our spiritual sickness worldwide, producing a spiritual pandemic.

The 1960s gave rise to a general hopefulness that we were on the verge of a new age that would be ushered in by popular culture. Instead, we have produced a spiritually confused, superficial popular culture that is artificially sustained by technology, money, and marketing.

If you believe, as I do, that humans possess innate spiritual, intellectual, creative, relational, and moral capacities, it seems clear that what we see today is a diminishment of God’s image on the part of both the creators and consumers of popular culture.

Where do we turn to find a better way? In a nation in which Christianity is the majority religion, conventional wisdom would point us toward the church, but as we will discuss in the next chapter, the bad news is that during the rise of popular culture, American Christianity marginalized itself by choosing to flee popular culture, fight it, or simply fall for it.

American Christianity, which initially set out to transform culture, is itself in need of transformation.
– Source: Dick Staub, The Popular Culture We Are In, Chapter 1 of The Culturally Savvy Christian — A manifesto for deepening faith and enriching popular culture in an age of Christianity-Lite.

Dick Staub is an award-winning broadcaster, writer, and speaker, whose work focuses on understanding faith and culture and interpreting each to the other. He is the radio personality behind The Dick Staub Show, a nationally syndicated daily broadcast he hosted for fifteen years.

Staub is the author of numerous articles and the books “Christian Wisdom of the Jedi Masters” (Jossey-Bass 2005) and “Too Christian, Too Pagan” (Zondervan 2000) the thesis of which is that if you truly follow Jesus you will seem “too pagan for your Christian friends and too Christian for your pagan friends.” 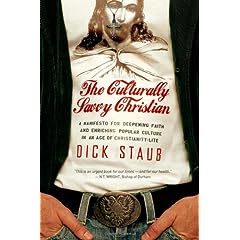 The early Church apologist Tertullian asked the famous question, “What has Athens to do with Jerusalem?” In other words, what does secular culture have to do with Christian culture?

Cultural commentator and radio personality Staub poses a variation on this query for the 21st century: how will Christian culture influence popular culture? Staub’s short answer is that Christians should not “Cocoon,” “Combat,” or “Conform” in relation to popular culture, but transform it by first understanding it.

Staub has an extensive knowledge of popular culture and quotes rock songs, movies and other mainstream media in a style that is not forced or clumsy.

His model of what a culturally savvy Christian should be is C.S. Lewis, who “enriched culture by countering culture, communicating within it, and also creating it.” Lewis, according to Staub, was able to transform the written word because first and foremost, he was a good Christian. His work emerged from a solid faith in God, which Staub believes should be the goal of all Christians.
– Source: Publishers Weekly, quoted at Amazon.com

Christians as enrichers of culture

In his incisive critique of contemporary culture and religion, Dick Staub concludes that though it is influential, American popular culture is generally superficial (diversionary, mindless, and celebrity–driven) spiritually delusional (moralistic, therapeutic, and deistic) and soulless (sustained not by art, craft, and ideas, but by the mad pursuit of profit propped up by marketing and technology).

Similarly American Christianity has devolved into its own mindless, diversionary, and celebrity-driven superficiality.

Because humans are created in God’s image with spiritual, intellectual, creative, moral, and relational capacities, we long for more, yet the true seeker faces the lose-lose alternatives of a soul-numbing culture and a vacuous Christianity-lite.

The renaissance we need in both faith and culture will originate in a deep spiritual renewal that restores God’s image in us and creates a new breed of culturally savvy, thoughtful creatives who rekindle the spiritual, intellectual, and creative legacy of Christians as enrichers of culture.
– Source: Book Description, The Culturally Savvy Christian