James Randi — once known as the “Amazing Randi” for his stage dexterity — is a magician-turned-fraud-debunker.

A skeptic, Randi is the founder and president of the James Randi Educational Foundation.

Randi has traveled the world to expose the shady tricks that self-described psychics, faith healers, mediums and other hustlers use to prey upon the vulnerable and gullible.

He has written several books, appeared on “The Tonight Show” with Johnny Carson, with Penn & Teller and on many other TV shows, and in 1986 was awarded a MacArthur “genius” fellowship.

His foundation has a long-standing offer of a $1 million prize to anyone who can prove paranormal ability under laboratory conditions. So far, no takers.
– Source: That’s Nice — Prove It! Washington Post, Mar. 16, 2007 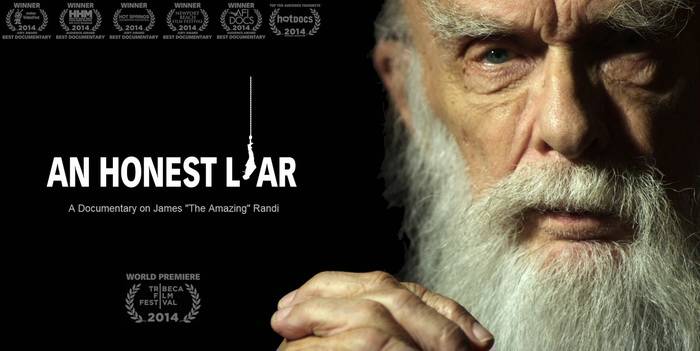 Official website for An Honest Liar, a feature documentary about James Randi

“The Amazing Randi,” as he billed himself, won notoriety for Houdini-like escapes from handcuffs and jails. His continuing passion for debunking also drew attention. So when Uri Geller burst on the scene in 1972, Randi was called. Geller claimed his telekinetic powers were so strong that he could bend metal. He typically demonstrated by seeming to melt a spoon just by rubbing it. Johnny Carson asked Randi to prepare a test for Geller’s 1973 appearance on the Tonight Show. Randi told the prop manager how to mark and secure the spoons so Geller couldn’t weaken them or prepare melted copies in advance. As Carson’s cameras rolled, Geller squirmed and concentrated but bent not a single spoon. Geller later said Carson’s skepticism blocked his powers. In a telephone interview this summer, Geller said that his powers have been proven scientifically and that Randi cynically used him to further his own career. “If I wasn’t around, Randi would be some little tiny magician based out of New Jersey. Today he is like an old man frothing from his mouth.”

Despite Randi’s high profile, hoax-busting was unprofitable until 1986. That’s when he took on TV faith healer Peter Popoff. Suspecting that Popoff’s hearing aid was really a radio receiver, Randi got a private investigator to bring a scanner and tape recorder to the faith-healing sessions. The scanner picked up Popoff’s wife, Elizabeth, calling, “Petey, can you hear me?” and reading information audience members had written on “prayer cards” or mentioned to ushers. On the Tonight Show, Randi showed a clip of Popoff appearing to get an inspiration about a “Harold” in the audience. “Cataracts,” Elizabeth relayed. “God is going to burn those cataracts right off your eyes!” Popoff thundered. “Popoff says God tells him these things,” Randi quipped. “Maybe he does. But I didn’t realize God used a frequency of 39.17 megahertz and had a voice exactly like Elizabeth Popoff’s.”

Within months, Popoff was bankrupt. And Randi had won his MacArthur award. Donors began contributing to his new foundation, allowing Randi to devote himself full time to hoax-busting. He set up a “million-dollar challenge” — to be paid from foundation reserves to anyone who could offer scientific proof of his or her paranormal powers.

Since then, Randi has traveled the world investigating, and often debunking, hundreds of people angling for the million, as well as anyone who makes a suspicious claim.
– Source: Portrait: James Randi: Schooled not to be fooled, U.S. News & World Report, Aug. 26, 2002

The James Randi Educational Foundation is a not-for-profit organization founded in 1996. Its aim is to promote critical thinking by reaching out to the public and media with reliable information about paranormal and supernatural ideas so widespread in our society today.

The Foundation’s goals include:

To raise public awareness of these issues, the Foundation offers a $1,000,000 prize to any person or persons who can demonstrate any psychic, supernatural or paranormal ability of any kind under mutually agreed upon scientific conditions. This prize money is held in a special account which cannot be accessed for any purpose other than the awarding of the prize.

Located in Fort Lauderdale, Florida, the Foundation is funded through member contributions, grants, sales of books and videos, seminars, and conferences.
– Source: About The Foundation

The Foundation is committed to providing reliable information about paranormal claims. It both supports and conducts original research into such claims.

At JREF, we offer a one-million-dollar prize to anyone who can show, under proper observing conditions, evidence of any paranormal, supernatural, or occult power or event. The JREF does not involve itself in the testing procedure, other than helping to design the protocol and approving the conditions under which a test will take place. All tests are designed with the participation and approval of the applicant. In most cases, the applicant will be asked to perform a relatively simple preliminary test of the claim, which if successful, will be followed by the formal test. Preliminary tests are usually conducted by associates of the JREF at the site where the applicant lives. Upon success in the preliminary testing process, the “applicant” becomes a “claimant.”

To date, no one has ever passed the preliminary tests.
– Source: James Randi Educational Foundation

As of April 1, 2007, the Foundation “will no longer be accepting unsolicited challenges, but will instead be issuing challenges directly to individuals who have a sufficient media profile and some sort of academic recommendation.”