Concerning the resurrection of Jesus Christ, the Apostle Paul wrote, “And if Christ is not risen, then our preaching is empty and your faith is also empty” (1 Corinthians 15:14). No third option is available. Christ’s bodily resurrection is either completely true or false. If it is false, then we have nothing to believe. If it is true, then it is the direct intervention of God in human history for the salvation of mankind and it validates the truthfulness of what the Bible says about the person, nature, and work of Jesus Christ. Our apologetic work begins with His resurrection.

Table of Contents hide
1 Truth Is Worthy Of Defense
2 The Lost Tomb Of Jesus?
2.1 About The Author
2.2 About This Article
2.3 Footnotes

Truth Is Worthy Of Defense

At one time the secular media respected the names of God and Jesus Christ. It was common for newspapers in the 19th century and early 20th century to carry sermons of leading preachers in our nation. But those glory days are far gone. The secular world feasts on engaging Christianity in battle from every side. We do not get to pick our battles, but when they publish a false claim, we must either boldly respond or humiliate our heritage with silence.

In this respect, today’s Christianity has been engaged in two unwanted battlefronts that obligate us to assume offensive and defensive postures. We know that the real battle is spiritual and that the men whose passion it is to destroy Christianity are unwittingly guided puppets of the Prince of Darkness, and the most peculiar thing about it is that they have no inkling of this. Paul informs us that “the weapons of our warfare are not carnal” (2 Corinthians 10:4). This spiritual contrast is eloquently portrayed in Donald Grey Barnhouse’s book, The Invisible War (1965).

The other battle is verbal. We feel compelled to set straight falsified, twisted, and distorted messages about Jesus that deceive the masses. Jesus is an easy target for them to shoot at because the Church does not respond in violence, but rather by apologetics. From the beginning we have defended the truth in word, logic, and faith (Jude 3).

It is noticeable that every year, as Easter approaches, the secular world takes their best shot at Jesus and His resurrection. We defend Him and His claims, and rightfully so, but sadly when the smoke clears our hearts hurt for those victimized by the lies of the enemies of Christ.

There is a method to the world’s madness. If they can somehow cut down God or Jesus Christ, then their world will be a much better place to live (so they think). Take the example from the Russian Communist revolution. The Bolshevik revolution that followed Lenin supported a trade agreement in 1924 with Canada. When the Bolshevik emissaries arrived in Canada with 40 crates for luggage, the Canadian Customs grew suspicious and demanded an inspection against their diplomatic protest. The Canadian search found that 40 percent of the content was propaganda destined for distribution, “denouncing and ridiculing Jesus Christ and the Christian religion and praising Communism and revolution.” [1] . Since Christianity withstands error, they must first attack us to later promote their cause.

This trend continues today in many arenas, one of which is The Lost Tomb of Jesus film, book, and Website. [2] These theorists attack the historical evidence of Jesus with speculation to bolster their agenda. One archaeologist, Amos Kloner (the first to examine the site) opines a motive, “They just want to get money for it.” [3]

The Lost Tomb Of Jesus?

It is no secret to those who study Israel’s archaeology that many first century tombs have been discovered with the bone receptacles, called ossuaries, still intact. Archaeology, as a scholarly study, does not thrive on flamboyance to stake its claim. Its history is marked with ethics and professional standards that few dare cross. Departing from these standards is the Discovery Channel’s film The Lost Tomb of Jesus (James Cameron, producer, Simcha Jacobovici, director). It turns a serious study into a carnival sideshow with extremist viewpoints and speculation that most scholars detest.

I have lectured on the Holy Land tombs and ossuaries since 1990 and found the film’s conclusions repulsive, not because it rubs me wrongly, but because I’ve read enough on the subject to comfortably call their thesis a lie and scholastic fraud, which I do without shame or hesitation. [4] 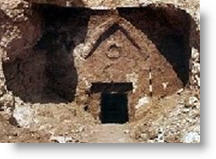 A tomb discovered in the Jerusalem neighborhood of Talpiot in 1980 has several ossuaries that match New Testament names. Those who read archaeological studies know how common this is. In fact, several hundred ossuaries bear names of New Testament people. Cameron and Jacobovici hypothesize that this tomb (pictured at left) “may have held the remains of Jesus of Nazareth and his family.” [5] They state their hypothesis in matter-of-fact terms, “This is the tomb!” and it is “the lost tomb of Jesus.”

Can they prove it is the ossuary and lost tomb of Jesus of Nazareth? No, so they mount a defense against deceit with slippery terms like may and possible. (Note: If it “may” be so, then it just as equally may not be so, but they do not address logical corollaries). Most troubling is how their proposition is fed by other media that dropped their slippery terms for bold assertions in their headlines. [6]

Cameron and Jacobovici’s earth-shaking news is that the family tomb of Jesus was discovered (pictured at left). Their idea is based upon the ossuary inscription names of Joseph, Mary, “Jesus son of Joseph,” Mary Magdalene, and “Judah son of Jesus.” They also reason that if Jesus’ bones were in an ossuary, then he did not raise from the dead. But missing from this equation is the fact that nearly 100 ossuaries in Israel bear the names Jesus, Joseph, and Mary, so granting their hypothesis, how can they assure their followers that they have the correct ossuaries? They cannot and they leave that unaddressed.

What wrecks their theory is another ossuary found in 1931 with the inscription “Jesus son of Joseph,” [7]. now making two! Ossuaries with “son of Jesus” are common; one has “Jesus son of Jesus” and another has “Shimeon son of Jesus.” [8] The theorists turn a blind eye to this. Another astute writer notes that 45 ossuaries bare the name Joseph, 44 have Judah, 25 have John, 22 have Jesus, 17 have Matthew, 42 have Mary, 41 have Salome, and 17 have Martha. [9] Cameron and Jacobovici largely ignore these items and they follow it with logical fallacies. They draw attention away from the problem with a red-herring trail by comparing the odds of a certain family group being together in the same tomb. Then they attempt to prove their case with circular reasoning:

They use the same circular arguments in several parts of their motif. In direct contradiction, several of the same names (Jesus, Mary, Joseph) were found grouped in other tombs at the Mount of Offense, Dominus Flevit, and Talpiot. [10]

The Discovery Channel has a revealing interview with Cameron who states: “Faith and forensics make very uneasy bedfellows, because to the truly faithful, there is no need for evidence. Faith implies, essentially, the lack of a need for evidence. You don’t have to prove it to somebody . . . The scientific method is in direct opposition to that.” [11]

Actually, the opposite is true. Christians believe in truth and, therefore, we use scientific studies without fear. The problem here is not science, but its misuse by these theorists. Cameron’s statement also contradicts the New Testament (think of Thomas who demanded hard evidence and, again, Jesus who offered such in Luke 24:39) and Church history overflows with evidence instead of blind faith. Here he commits yet another logical fallacy. He equivocates his term “evidence.” He uses it first in the historical sense and second in the scientific sense without distinction. Historical evidence is not tested scientifically as in a laboratory. How would Cameron propose to “scientifically” prove or disprove the historical evidence that Washington crossed the Delaware River? Cameron ‘s logic and premises are fatally flawed.

My concluding points are:

Kurt Van Gorden is a contributor, researcher, and editor for 16 books by Walter Martin, Jill Martin-Rische, Josh McDowell, Don Stewart, Ronald Enroth, Alan Gomes, Ravi Zacharias, the Zondervan Series on Cults, and the Sunday School Department for the Church of the Nazarene

Freely copy and distribute. For PDF or HTML copies write to MissionEditor@hotmail.com