Theologically, the communal religious movement known as The Twelve Tribes (‘Commonwealth of Israel’), is a cult of Christianity

The New England Institute of Religious Research (NEIRR), a countercult organization, has done extensive research into this group — examining 20 years worth of the movement’s teachings.

In the Messianic Communities they have both inner and outer doctrine. Their outer doctrine is the Freepapers and other works they make available to the public and press. Their inner doctrine, which can only be understood if you are under the “anointing,” are the teachings of their self proclaimed “apostle,” Elbert Eugene Spriggs. He is referred to in the group as “Yoneq.”
– Source: Teachings Of The “Apostle,” Elbert Eugene Spriggs

This website contains a very abridged version of the hundreds of teachings of The Twelve Tribes. As more material becomes available it will be added.

Here you will also find the complete archives from the years 1994-2004 of the in-house periodical InterTribal News.

This site is offered for educational purposes since none of this information seems to be available on the group’s website: www.twelvetribes.com.

All of the teachings, unless otherwise noted, are written by a man named Eugene Spriggs, also known as Yoneq. Curiously, he is never mentioned on the website either.
– Source: Twelve Tribes Teachings

Based on its extensive research into this group, the NEIRR concludes:

Elbert Eugene Spriggs, “Yoneq,” is the key to understanding Messianic Communities and its evolution. His own personal spiritual odyssey has been reflected in the group. Just as a local Church tends to take on the personality of the pastor, for better or for worse, so Messianic Communities has taken on the personality of Spriggs. It is our studied opinion that his influence has been immense over the life, leadership and direction of the Communities. Unfortunately, as time goes on and the group moves further from the original Vine Community Church of Chattanooga days, this influence is more destructive and controlling.

Renowned Christian author, Gene Edwards, wrote a book called Letters to a Devastated Christian. In this book he suggests some guidelines for evaluating groups and leaders. “Does the man who is leading the movement have in his nature a need to control everyone within his environment?” He then goes on to explain that some people have a “psychological flaw” to control. God can break that in a man’s life and then use him. However, “if this need to control remains unbroken in a man, then he will almost always tend towards authoritarianism.” Messianic Communities, under the leadership of Spriggs, has tended towards an extreme authoritarianism.

This group is a classic study of the evolutionary process that occurs when a person rises to a position of leadership, claiming a “direct pipeline” to God and having no accountability. Back in the early 1970’s when the Vine Community Church first began Spriggs had an undisputed authority. However, there was a more “free-wheeling” expression of life and devotion to Christ. The group was then far more orthodox theologically and open to other Christian expressions. Many street people had their first encounter with Jesus through the witness of the Yellow Deli’s, Areopagus, musical band “Salt,” Freepapers, etc. People were allowed more freedom to come and go, express their opinions, dress individually. There was also always the promise to raise up others who would have a shared leadership position with him. This never developed. There are others who have the titles of leadership within the Messianic Communities, however, nobody wields the authority and power that Spriggs does. It is our conclusion that had the Messianic Communities truly been led by a “Responsible Ten” who were accountable to one another and shared in all decision making the group would be radically different and far less controlling.

The primary vehicle of control within the Communities are the “teachings.” Since Spriggs is the source of new doctrines and the standard which measures the truth of any other teachings his influence is singular and absolute. Sociologically, the group has become more controlling over the years and more theologically deviant. A large part of the reason for this is the extreme isolation of the group. People live in community and look and behave alike. People also are not allowed to have any diversity of opinion, and certainly never question the leadership of the “anointing.” They are also cut off from outside intellectual stimulation and challenge. What information is fed to the average Communities member is thoroughly filtered through the narrow lens of Spriggs’ construct of reality. This is not to say that he personally reviews every piece of disseminated literature. However, it is his theological “never, never land” that has a secure and steadied influence over every aspect of Communities life.

That the Messianic Communities “majors in minors” is consistent with the corrosive effect that occurs in groups where members essentially abdicate all the decision making power in their lives to those in “authority over them.” Major concerns for Communities members now consist of the “correct” name of Jesus, beards, ponytails, Sus pants, head coverings, complete obedience to authority, establishing 12 tribes, dietary restrictions, name changes, Sabbath keeping, etc. This appears to be Phariseeism. The Gospel of Jesus Christ should set a person free. However, people in Messianic Communities become increasingly weighed down with an ever expanding number of rules and regulations that demand strict adherence. To deviate from these regulations is to be “cut-off” from the “Body” and potentially be sent away. This is analogous to being damned. This is all managed with the greatest sincerity. Our initial reactions, when we had the privilege to visit various Communities, were only positive. We have met many, many fine people who have given up their lives to Messianic Communities. Thus, upon first exposure to the group there does appear to be a love that is demonstrated in a way not often found in Christianity. However, there is a seamier side to Communities life. The devastation in most ex-member’s lives, and the teachings of Spriggs, evidence a litany of spiritual and emotional abuse. In their zeal to “forsake all for Yahshua” it is, in reality, a forsaking all for the Communities. This is because the members commitment to Messianic Communities is their commitment to God. This is a common confusion that often occurs in high control groups.

In our opinion, Messianic Communities is essentially a Galatian heresy. In Paul’s letter to the Galatians he is deeply concerned about those who would once again reestablish the Law as a means of pleasing God. Paul asks them in Galatians 4:9-11,

“But now that you have come to know God, or rather to be known by God, how is it that you turn back again to the weak and worthless elemental things, to which you desire to be enslaved all over again? You observe days and months and seasons and years. I fear for you, that perhaps I have labored over you in vain.”

This question must also be answered by Spriggs and Messianic Communities. In their zeal to serve the Lord people are once again enslaved, and tragically, in His name.
– Source: NEIRR’s Conclusion

The Twelve Tribes’ offbeat and un-Biblical theology is evident in all its teachings, including its views on segregation, globalism, and multiculturalism:

The Creator of all mankind didn’t want the nations and the races of earth to come together. That is why He divided their languages at the tower of Babel. He saw that they were not maintaining the boundaries of conscience and would need further boundaries to keep them from destroying themselves. Therefore He separated them into nations to become distinct races and cultures. By themselves, they would have a better chance to hear the voice of their conscience and the voice of creation speaking to them. Through this, it was possible for them to see their need for their Creator and find a way back to Him.
[…]

Nations have to impose laws and sanctions in order to keep order in a multicultural society. Multiculturalism pressures people to cross boundaries that go beyond the realm of natural law, coercing them to be one with a neighbor that doesn’t even speak their language or have their culture. It goes beyond the realm of how God wanted people to live in separate nations for their own welfare and safety.

Multiculturalism increases murder, crime, and prejudice. It goes against the way man is. It places impossible demands on people to love others who are culturally and racially different. This is unnatural — it forces people to go against their instinctive knowledge, like trying to love sodomites. They are told, “You can’t discriminate.” Although discrimination is viewed as an evil sin, it is still within a person’s prerogative (right) to segregate himself.

If the human race had remained united during the era of the Tower of Babel, then globalization would have resulted sooner. The leaders of that generation would have seized the reins of history and there would have been no end to their rebellion against God. Just as back then, globalization today is the proud attempt to displace and exclude the Kingdom of God. It is a satanic attempt to take over the earth in a unified one-world government.
– Source: Breaking the Boundaries, The Twelve Tribes, official site, as archive by The Internet Archive

Compromising the Gospel of Grace

The group Twelve Tribes  has a core teaching of unity, as expressed in its name, which is taken from Paul’s testimony before King Agrippa (Acts 26:7). According to their Web site’s “Who We Are” page, “We are a spiritual brotherhood whose love for one another stretches across the boundaries of nationality, race, and cultureâ€¦. We sometimes speak of ourselves as Messianic communities, for we live in the hope of Messiah and are being made ready for Him.”30 I phoned their toll-free number (888-893-5838) and spoke with one of the members. He said their identity and heritage is Jewish and that one or two of the leaders are Jewish.

Their doctrinal statements appear to be Trinitarian. The Messiah is Yahshua (a.k.a. “Jesus” by denominational churches), who is eternal Creator, the Son of God, who lived a sinless life for us, died for our sins, and was raised from the dead by the Holy Spirit. The call for a holy life appears to be gospel-motivated: “It is out of love for Him who first loved us that we live as we do, no longer for ourselves, but for Him who died and rose again for us (2 Cor. 5:14–15).”31

As with many exclusivist sects, their emphasis on unity seems to be on their terms only. They teach that communal living is an essential feature of Christian faith, and there is a high degree of antidenominationalism in their literature. Yet it is their view of man’s eternal destiny that casts the biggest shadow of heterodoxy on this group. Their exegesis of Matthew 25:31–40 portrays three categories of humankind: the wicked (the “goats,” cast into the lake of fire), the non-Christian righteous (the “sheep” who will have a kingdom based on their merits), and Yahshua’s brothers (the Holy City has been prepared for them).32 This teaching on eternal destiny distorts Scripture, adding a category that is not there, teaching the heresy of justification by works for the second group, and possibly blunting attempts to share the gospel — if we decide that we are speaking to one of the “sheep” of Matthew 25:31–46. And if Jesus Himself said that these righteous “sheep” have eternal life, why should they bother to trust the Messiah? The Twelve Tribes’s exegesis of this passage fatally compromises the gospel of grace.
– Source: Bruce J. Lieske, The Messianic Congregational Movement: Cults and ‘Look Alikes’ 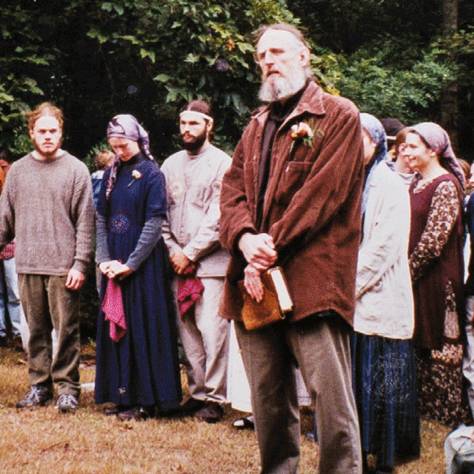