The Rainbow Family of Living Light (usually simply referred to as the Rainbow Family) is a leaderless movement of loosely affiliated individuals who put on events known as Rainbow Gatherings.

The movement does not have leaders or an organization.

According to an ‘unofficial’ website 1 with an extensive collection of information, “[i]t is longstanding Rainbow Family consensus that nobody has ever, or ever will represent the Rainbow Family” and “in no way should anyone who works on this web site be considered to be representing the Rainbow Family.”

When the earth is ravaged and the animals are dying, a new tribe of people shall come unto the earth from many colors, classes, creeds, and who by their actions and deeds shall make the earth green again. They will be known as the warriors of the Rainbow.

Some say we’re the largest non-organization of non-members in the world. We have no leaders, and no organization. To be honest, the Rainbow Family means different things to different people. I think it’s safe to say we’re into intentional community building, non-violence, and alternative lifestyles. We also believe that Peace and Love are a great thing, and there isn’t enough of that in this world. Many of our traditions are based on Native American traditions, and we have a strong orientation to take care of the the Earth. We gather in the National Forests yearly to pray for peace on this planet.

There’s only one requirement for being welcomed into the Rainbow family: You’ve got to have a belly button.

The interesting thing is that we all consider ourselves to be part of a huge, extended family, no matter what our reason for gathering, no matter what our spiritual or religious or political or economic or social views may be. And many people who have not yet had an opportunity to attend a gathering also feel they are part of this family.

Another interesting thing is that there is no formal organizational structure. There are no membership qualifications, no fees or dues, no leaders, and virtually no rules other than the one of “peaceful respect.” Each year, individuals take personal responsibility and work together with others on whatever they are inspired to do, from office work, to scouting, to building the kitchens at the gatherings, to hauling in food and first-aid supplies, to peacekeeping, etc. Every project undertaken operates essentially on a consensus basis. Participation, communication, and cooperation are how things get done.

It is nothing short of miraculous.
– Source: Carla, What is the Rainbow Family of Living Light?

The movement is best known for its annual Rainbow Gathering — both in the U.S. and abroad — in which tens of thousands of people camp together for up to a week. In the U.S., Rainbow Gatherings are held in publicly owned National Forests, without any official permission. (Since there is no official organization, and there are no official leaders, no-one is authorized to negotiate permits).

[W]e cooperate with the rangers of the USDA Forest Service in doing the job they were hired for: protecting the land. […]

Do remember though, that forest rangers are law enforcement ofï¬ cials who have the power to arrest you.

We choose not to sign permits or to make agreements with the Government. Since we are a Gathering of equal Individuals, no one person has the right to represent anyone else and thus no one has the authority to sign a permit as a representative of the Rainbow Family. In choosing not to sign, we are exercising our Constitutional right to assemble peaceably.

The second edition of People of the Rainbow: A Nomadic Utopia, by Michael L. Niman, documents that the movement is subject to growing harassment from U.S. law enforcement agencies.

In addition to addressing changes within the Rainbow Family and its complex relationship to “Babylon” (what Rainbows call mainstream culture), the book’s new material explores the growing harassment Rainbows now face from U.S. law enforcement agencies — especially those associated with the National Forest Service. As Niman contends, this particular saga of a U.S. bureaucracy at war with its own citizens is a subplot in the larger–and disturbing–story of how the relationship between Americans and their government has changed during the first decade of the twenty-first century.
— Source: Publisher’s book description

Video documenting the way law enforcement officers (LEOs) acted after arresting a few people at the 2008 Wyoming Rainbow Gathering. The arrest were made near Kid Village (also known as Kiddie City), a camp for parents, children, and expectant parents.

The law enforcement agents soon found themselves surrounded by an Om Circle — a circle of people chanting “om” in an effort to harmonize an uptight situation. Michael Niman says it is “sometimes ussed for coercive purposes.”

The officers first fired into the ground, and when the Rainbow people put themselves between the officers and the children, the LEOs began shooting rubber bullets into the arms and chests of the Rainbows.

According to a Forest Service press release, Rainbows first began throwing rocks and sticks at the officers.

The Gathering has been held every year since 1972. The meetings are organized by open, free-form councils which use consensus process for making decisions. According to the Rainbow Guide, which “helps the Family to connect with each other throughout the year,” 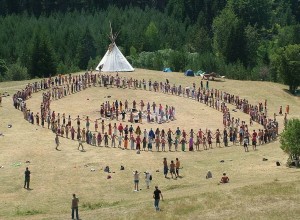 Main Council is held daily at Rainbow noon or early evening in the Main Meadow, and is announced by the blowing of a conch shell. Main council deals with issues of the Gathering in an open forum where ALL ARE WELCOME to participate. It is only in Main Council that decisions affecting the entire Gathering can be made. Anything can be discussed/expressed at main council, from the practical, to heartsongs & dreams. Health & safety issues should be resolved first, as council decisions may not be made after sunset.[…]

Rainbow councils are an open process where everyone is invited to listen and speak. […]

Consensus is our attempt to discover the will of the Spirit through the hearts of the people. […]

Recognized Rainbow rules come from only one source, main council at the annual national gatherings. EVERYONE is welcome and encouraged to attend these councils. The ONLY rules recognized are ones formally accepted by council consensus. This means that EVERYONE in the council circle agreed that a suggested rule should be a rule (no-one objected). Rainbow rules are the culmination of family consensus across the years. For those who do not accept this, please bear in mind, that if this process were not happening, THEN THERE WOULD BE NO RAINBOW GATHERING to argue the point in the first place. Respect for the whole gets respect from the whole. The idea of “me” yielding to the idea of “we”. Trust in your family to be wise. Conversely, rules in Rainbow are not final, should be humbly imparted with love (at least at first), and most importantly, conflicts should always be addressed with love, and an attempt to preserve rather than defeat.

There are also smaller Rainbow Gatherings that may take place more frequently.

The Welcome Here site, which also include much information on the movement, says

The gatherings are called rainbow because they are for all the peoples of the earth, from many families, tribes, and nations. Some say that the Hopi people native to North America tell a vision of a time when mother earth, the land, air, waters, and creatures of all kinds were sick with poisons and ill treatment by people, the children of the white races, or more specifically the people who lived the cultures of those who displaced the native peoples of the Americas – not just Caucasians, would grow their hair long, wear beads, and come together with the children of all the nations to heal the earth.

At the Annual Rainbow Gathering in the U.S. the morning of the 4th of July is set aside for a time of communal prayer:

We gather to focus on Love, nature, our better nature, healing division, and to honor and respect all positive contributions to the evolution of earth and all life. On July 4th, from daybreak till high noon, the camp is hushed, hopefully no talking at all. It is a wonderful exercise to communicate without words. People gather in Main Circle to meditate for World Peace and the Healing of the Earth. This is a time of profound energy. Explore your deepest feelings so that your healing might will be complete. The silence is broken with a resonant OM after the Childrens’ Parade enters the Circle, after high noon.
– Source: Mini-Manual

Note: Keeping in mind the the Rainbow People movement is leaderless and is not represented by an official organization, The Rainbow Family of Living Light Mini-Manual — “Suggested Wisdom Culled from Years of Experience and / or Trail & Error” — is probably the best introduction to the Rainbow People and the Rainbow Gathering.