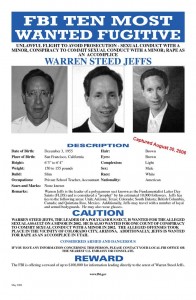 The FLDS is one of many polygamous offshoots of the Mormon Church.

Most of these Mormon Fundamentalists broke away from the Church of Jesus Christ of Latter-day Saints after it was pressured into disavowing polygamy.

The FLDS is one of a few such sects that have been the target of allegations of welfare abuse and forced marriages of underage girls.

Almost immediately after securing his leadership position, Warren Steed Jeffs — whose stated goal was perfection on earth — began tightening control over the religious sect, and he soon ruled with an iron fist.

Among other things, he forbade members from associating with apostates — those who left the ‘church’ on their own accord or who were disfellowshipped and sent away.

Members talking to the media now risked losing their families and houses to the church.

As time went on, Jeff kept adding new rules, banning books, newspapers, television, radio and DVDs. At one point he ordered all family photo albums to be destroyed.

When people complained and a power struggle ensued, in Jan. 2004, Jeffs ousted and excommunicated a number of men ‘for disobedience.’

In June, 2005, Warren Jeffs “was indicted on charges that he arranged a marriage between a 16-year-old girl and a man who was already married.”

Earlier, law enforcement agents attempted to serve papers on Jeffs regarding two civil actions: “Two lawsuits are pending in Utah against Warren Jeffs, the church’s prophet and leader. One complaint, by a nephew, accuses Jeffs of sodomy. Another, filed by former members of the church, alleges a cover-up of child-sex abuse.”

In his book, Under The Banner Of Heaven: A Story of Violent Faith, about Mormon fundamentalism, Jon Krakauer described Warren Jeffs as “a tall, bony man with a bulging Adam’s apple, a high-pitched voice, and a frightening sense of his own perfection in the eyes of God”.

Jeffs went in hiding and became a fugitive. In July, 2005, the FBI joined the search for him, and the states of Arizona and Utah announced a $10,000 reward for information leading to his arrest.

On Aug. 30, 2006, Jeffs was arrested after the car in which he was travelling — together with Isaac Jeffs, one of his brothers, and Naomi Jessop Jeffs, one of his 50+ plural wives — was stopped for a traffic violation.

In Sep. 2007, the ‘prophet’ was found guilty of two counts of being an accomplice to rape. In Nov. of that year, Jeffs was sentenced to two consecutive terms of five years to life in prison.

Jeffs was subsequently jailed in Arizona, where he faced charges related to marriages involving teenage girls.

Those charges were dropped, in June, 2010, in favor of sending him to the state of Texas, which wanted to prosecute him on similar charges — based on evidence obtained during an April, 2008, raid on the cult’s compound and temple. [Details in this story: Texas takes possession of FLDS cult’s ranch.]

On July 27, 2010, the Utah Supreme Court reversed Jeffs’ conviction and sent the case back for a new trial, saying there were “serious errors” in instructions given to the jury that deprived Jeffs of a fair hearing.

At the time, Jeffs was already facing extradition to Texas to answer multiple felony charges. He was extradited on November 30th, 2010.

In August, 2011, a Texas jury convicted polygamist sect leader Warren Jeffs of child sexual assault Thursday in a case stemming from two young followers he took as brides in what his church calls “spiritual marriages.” He was sentenced to life in prison plus 20 years.

While many people are familiar with the raid on the FLDS’ Texas compound, few know the background, and fewer still understand the full extent of what took place at the FLDS’ Yearning For Zion ranch.In this NBC Dateline program (broken up in many parts, but well worth watching) Rebecca Musser tells her story of how she was married — as the 19th wife — to Rulon Jeffs, and how she escaped the FLDS.

Rebecca was later the key witness in the trials of Warren Jeffs that got him life in prison.

This program provides much insight into Warren Jeffs. Starting at minute 34, the Texas ranch is discussed, including what crime scene investigators found hidden in the FLDS’ temple — evidence that helped convict Warren Jeffs.

In Prison, Jeffs continues to rule sect with iron fist

Though imprisoned for life, Jeffs continues to rule his followers with an iron fist.

In an academic paper published in February, 2014, University of Utah law professor Amos Guiora and law graduate Julia Chamberlin write that polygamy is a “concrete crime with clear consequences for those forced to participate in it.”

The paper focuses on the Fundamentalist Church of Jesus Christ of Latter-Day Saints.

Describing extensive interviews with former FLDS members, the researchers conclude that parents in the FLDS fail to protect their children as they carry out orders given by Warren Jeffs and other church leaders:

The interviews clearly showed the extraordinary control Jeffs exercised over the community, remarkably in spite of the lack of his physical presence. In addressing this issue, one interviewee commented that for many community members hearing his voice (an issue to be subsequently addressed) provided sufficient cause for acting in accordance with his demands and acceding to new Revelations. These new Revelations espoused an end of the world prophecy on December 31, 2012, the removal of eight-year-old girls from their parents’ home in order to prepare them for their future role as a sister wife, the transfer of newborn babies to new caretakers who subsequently rename them in order to erase their selfidentity, and only fifteen “worthy’ men were permitted to impregnate women in the FLDS community (the woman’s husband and others forcibly hold down his wife as one of the fifteen men rapes her). The willingness to conform is of particular note when it directly harms individuals and families alike; unquestioned obedience culminates in destruction of families, underage marriage and shunning of particular individuals accused of crimes/sins.216 As noted by the individuals who Guiora met, the overwhelming majority of faith members accept, unquestioningly, Jeffs’ commands.
– Source: Polygamy: Not ‘Big Love’ But Significant Harm

In her first live television interview, Rachel Jeffs, daughter of Warren Jeffs, the self-proclaimed prophet of the FLDS Church, tells Megyn Kelly TODAY viewers about life inside one of the country’s most notorious polygamist groups. She says her father sexually abused her “way more times than I can even count.”
– Source: TODAY show, posted at YouTube, Nov. 10, 2017

Rachel Jeffs broke free from the FLDS cult after she had been sent off to live by herself as punishment by her father.

Her alleged crime: Having sex with her husband while she was pregnant, an act already forbidden by FLDS.

Rachel was forbidden from seeing any of her five children for seven months. That banishment became the breaking point that led her to flee the sect.

“I was very angry at Father, and I was angry that he would do that to my kids,” Rachel recalled Friday on Megyn Kelly TODAY, in her first live television interview. “And I feel like he was punishing me for what he did to me. Like he was trying to break me and make me feel like I was worse than him. I wouldn’t let myself go there. I knew he had done wrong, and I didn’t want to let him break me.”

Rachel had already been subjected to a childhood of sexual abuse from her father, who started molesting her “way more times than I could count” when she was 8. He also took her to bookstores to show her pornography.

“It was so against his teachings, so against what he had taught us, I didn’t even know what to think. And I just felt terrible,” she told Kelly.

In a series of interviews with Kelly that also will air Friday on “Dateline,” Rachel recounted growing up inside the FLDS community on an isolated ranch, and how she escaped that life. Her harrowing experiences are also the basis of a new book, “Breaking Free.”
– Source: Daughter of polygamist Warren Jeffs tells how she broke free of his cult, Eun Kyung Kim, TODAY, November 10, 2017

First published (or major update) on Tuesday, May 6, 2014.
Last updated on June 11, 2022. Original content is © Copyright Apologetics Index. All Rights Reserved. For usage guidelines see link at the bottom.