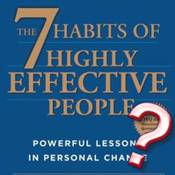 One of the most popular personal development training programs today is The 7 Habits Of Highly Effective People by Stephen R. Covey. 1 Many church and religious organizations are using this program to train ministers and leaders. One of the reasons they find this program attractive is because it gives a prominent place to spirituality in personal growth. However, most of those who take this training are unaware of the specific religious beliefs that are behind many of Covey’s principles.

Covey explains in this book that that he has discovered how to communicate Mormon truths to non-Mormons by simply changing his vocabulary. He writes, “I have found in speaking to various non-LDS groups in different cultures that we can teach and testify of many gospel principles if we are careful in selecting words which carry our meaning but come from their experience and frame of mind.” [Divine Center, p. 240.]

In The 7 Habits Of Highly Effective People Covey writes that he finds renewal in daily meditation on the scriptures. [7 Habits, p. 292.] In “the Gospel of John, the epistles of Paul and Peter, the Book of Mormon, and Doctrine and Covenants.” [Divine Center,” p. 298.]

He also writes, “Cultivate the habit of reading the scripture everyday — perhaps just before retiring. It’s better to go to sleep on Helaman or Moroni than on the latest TV talk show.” [Divine Center, p. 197.]

7 Habits refers to “natural laws in the human dimension that are just as real, as unchanging and unarguably ‘there’ as laws such as gravity are in the physical dimension.” [7 Habits, p. 32.] In The Divine Center Covey identifies these “laws of nature” as the teachings of the LDS Church which “enable the individual personality to grow and develop until eventually he can become like his Father in Heaven.” [Divine Center, p. 246.] For example, The Divine Center reveals that Covey derives his principle of being pro-active rather than reactive from Mormon scriptures. [Divine Center, p. 176; 7 Habits, pp. 70-77.]

Those who have read Covey’s 7 Habits are familiar with his use of the term “map” for a paradigm of life.[7 Habits, p. 29-35.] He writes, “The more closely our maps or paradigms are aligned with these principles or natural laws, the more accurate and functional they will be. Correct maps will infinitely impact our personal and interpersonal effectiveness far more than any amount of effort expanded on changing attitudes and behaviors.” [7 Habits, p. 35.] In The Divine Center he identifies both correct and incorrect maps. Covey reveals that the true map is the LDS Church and that evangelical Christianity is a false map that limits the personal development of its followers. He writes:

Because of the incorrect map inherited through centuries of apostasy, the sectarian world does not understand the above concepts. The map so distorts the knowledge of who we really are, who our Father in Heaven really is, who Jesus Christ really is, and who the Holy Ghost really is, that it imposes enormous limitations on the software program of those who ‘buy into it.’ It also impels their minds to great accusation and criticism of those who are correctly programmed in these matters. They call the Latter-day Saint concept of an anthropomorphic God arrogant, presumptuous, and narcissistic. Their concepts drastically reduce man’s ultimate potential. To them, the potential is not to become like God, not to have eternal life — that is, to have the kind of life and character that God has, to become perfected as he is — but instead to become his eternal robots, worshipping him in a saved condition throughout all eternity. This rules out the celestial family stewardship, the opportunity to become eternal co-inheritors of all that the Father has, and the eventual opportunity to become like the Father, a god, capable of eternal increase, of spiritual procreation.

The true map, on the other hand, tells us what Elder Lorenzo Snow summarized in his couplet:

Covey criticizes evangelical denominations for promoting “incorrect maps.” Those who follow these false maps “are blinded by the subtle craftiness of men.” [Divine Center, p. 16.] He writes, “No wonder Joseph Smith under inspiration identified the ‘creeds of the fathers’ as ‘the very mainspring of all corruption;'” [Divine Center, p. 17.]

He also argues that the beliefs of traditional Christianity are “false maps … in the form of beliefs or doctrines or creeds.” [Divine Center, p. 15.] Covey refers to Mormon scripture (Joseph Smith — History 1:19) to prove that the beliefs of evangelical churches are “an abomination in the sight of God.” [Divine Center,” p. 15.] (Note: Joseph Smith — History 1:5 reveals that the three churches in question were Methodist, Presbyterian, and Baptist.)

Covey contends that the message of non-LDS churches is an inaccurate and distorted map.

Such a warped map gets just about everything wrong, including God, man, man’s relationship to God, the role of Christ the Savior, the purpose and meaning of life. Naturally, it also produces a warped understanding of what the commandments are and what obedience is.
– Source: [Divine Center, p. 246.]

Theologically, the Mormon Church (LDS) is considered a cult of Christianity

Covey believes that the maps (paradigms) used by most people are false because of apostasy. He claims that this situation continued until the nineteenth century when Joseph Smith restored the true map. According to Covey, the true map places no limitations on the development of human capacities and potentials. [Divine Center, pp. 14-17.] Covey claims that with the help of the LDS Church’s “gospel ordinances people can develop “godlike powers and capacities.” [Divine Center, pp. 208-9.]

Covey teaches about “the upward spiral” in 7 Habits. [7 Habits, pp. 304-06.] He writes, “Renewal is the principle — and the process — that empowers us to move on an upward spiral of growth and change, of continuous improvement.” [7 Habits, p. 304.] The Divine Center reveals that he is referring to the Mormon principle of “eternal progression.” [Divine Center, pp. 180, 207, 213.] He claims that this “constantly expanding upward-spiraling movement in the development of the human soul… constitutes the road to perfection.” [Divine Center, p. 207.]

Covey warns his readers against privately interpreting scripture. Rather he advocates that they “look to the present prophet and Church (LDS) leaders and official Church policies for the manifestation of the Lord’s will and interpretations.” [Divine Center, p. 199.] He also writes, “The inspired words of living prophets may be of greater worth to us than the words of the dead prophets. Their words also can be scripture.” [Divine Center, p. 199.]

Covey’s beliefs about salvation are also uniquely Mormon. He warns his readers against seeking “any kind of ‘special’ relationship” with Jesus Christ. [Divine Center, pp. 67-68.] He writes, “The Christ-only approach is inappropriate for Latter-day Saints and for this book.” [Divine Center, p. 83.]

Covey claims that eternal life is only for those who obey the gospel principles. [Divine Center, p. 294.] He argues that the grace of Christ is not efficacious “except through our obedience to gospel standards of righteousness.” [Divine Center, p. 158.]

Covey labels the evangelical doctrine of salvation by grace alone a “false concept” and an “apostate doctrine.” Divine Center, p. 68.] He even claims that one of Satan’s lies to the world is that all God wants us to do is receive Christ Jesus through faith. [Divine Center, p. 271.]

The religious beliefs of Covey are Mormon. They are not Christian. A study of Covey’s writings reveal the Mormon ideas and beliefs behind many of the principles found in 7 Habits.

Churches and religious organizations should seriously reconsider whether it is appropriate to use a personal growth program that is written by someone who believes these false doctrines. They also need to decide if they want to promote Covey as an expert on personal growth and development that Christians should follow.

This article was written by Bill Gordon, who at the time worked with the Interfaith Witness Department, of the North American Mission Board.

His article is used here by permission. It was first published at Apologetics Index on October 16, 1999.