YWAM’s [Youth With a Mission‘s] subtitle is “To know God and make Him known.” Catchy phrase; one that would entice most people to want to be part of.

Thousands join YWAM yearly on short term mission experiences, and in this YWAM definitely fulfills the latter part of their subtitle. The former part of their phrase is not so clear however. One should ask, “What is the gospel they are spreading?” Do they really know God – the God of the Bible, or have they redefined traditional and biblical definitions of God?

The importance of correct theology on important matters cannot be overstated. One needs to look no further than the history of the Christian church to see how much correct belief was valued. Beginning with the Apostles’ Creed, God’s followers have clearly set out the basics of Christian belief which followers of Christ should subscribe to. John 4:24 RSV says “God is spirit, and those who worship Him must worship in spirit and in truth.” Here is presented the fine balance of worshipping God with one’s whole heart, and through the grid of correct doctrine. Both are equally important but are rarely practised in perfect balance by most Christians.

Like many groups birthed out of the Jesus movement in the 1960s, YWAM emphasized the importance of relationship with God rather than the doctrine of God. 1 This led, perhaps innocently, to a devaluing of theology.

While none of YWAM’s early or current leaders came from questionable denominational backgrounds, it seemed like discernment was lacking. This led to YWAM leadership’s introduction of Moral Government theology (MGT) to YWAM students worldwide. 2

This was mostly done in the form of guest lecturers teaching at YWAM schools, who were teachers and believers of MGT. While the majority of MGT input came from these sources, many YWAM leaders also subscribed to this belief system as well. MGT was not the only strain of theology taught in YWAM schools, and in all fairness YWAM did allow other lecturers with an evangelical message to speak. However, to even allow false doctrine to be taught in their schools at all is, at the very least, irresponsible. What is Moral Government theology? I shall provide a summary below, but for those wishing a more in depth study, I recommend getting the book Evangelical Heathenism: Examining Contemporary Revivalism

The chart above is not original, and is paraphrased from Dr. Alan Gomes’ important book Lead Us Not Into Deception: A Biblical Examination of Moral Government Theology

. It was important because it was one of the first pieces of writing that exposed the heresy of MGT. Sadly, it also documented the fact that this heresy was being taught in YWAM schools world-wide. Also of interest in the book is an account of spiritual abuse that happened to Mr. Greg Robertson in the 1970s.

Much like myself when I presented my claims of spiritual abuse to YWAM leadership, Gomes’ findings were dismissed and an attempt was made to discredit him. 3 However, since Gomes had rock-solid evidence, since the book was receiving some notoriety, and since various counter-cult ministries became concerned over the issue, YWAM leadership had to respond. 4

Dr. Gomes and his pastor met with YWAM’s founder, Loren Cunningham, and a couple members of the international council to try and resolve the issues. It was falsely asserted at this meeting by Cunningham that certain MGT books were removed from YWAM bookstores, when only the day before this meeting Gomes had telephoned the main bookstore in Kona Hawaii and confirmed that they were still selling the MGT books in question. 5

Further, Gomes exhorted YWAM leadership to repent for allowing MGT to be taught in YWAM schools, yet the closest YWAM ever came to repentance was the expression of regret that they allowed MGT to become so controversial. 6

In the end, YWAM dismissed the seriousness of Dr. Gomes’ claims as coming from an obsessive Calvinist who wanted to split theological hairs about minor, unimportant differences in doctrine. 7 Moreover, they actually blamed others for distorting the issue, saying “we see that some with a Calvinistic view of the atonement misinterpreted our rejection of a literal exact payment theory . . ..” 8

I continue to receive reports from former YWAMers that Moral Government is currently taught in some YWAM centres – some centres, not all. That does not surprise me, since YWAM has shown that they do not consider MGT to be heresy; for them it is merely another strain of legitimate Christian doctrine.

YWAM actually states that MGT is essentially Wesleyanism, 9 which is absolutely untrue. Since being confronted with the dilemma of MGT in their Mission, YWAM leadership has issued a doctrinal statement 10 that sounds very evangelical, but I believe this is merely to present a good image to the public. One needs to look beneath the veneer of religiosity and see YWAM for who they truly are. They have consistently shown a resistance in being accountable to Christians who care – Gomes, myself, and many others can attest to that. In most cases, we are brushed off as the ones with the problem, as the previous quotation illustrates.

Paul writes in Eph. 4:14 of his hope that the body of Christ will mature through unity, so that “we may no longer be children, tossed to and fro and carried about with every wind of doctrine, by the cunning of men, by their craftiness and deceitful wiles.” Hence, we “speak the truth in love” (vs. 15), hoping to help our brothers and sisters mature. YWAM leadership has a legacy of rejecting this help and has shown that they are not accountable on issues of theology or spiritual abuse.

Recently, a friend of mine in Kona told me that YWAM’s base there is embracing a controversial teaching called Momentus which, at the very least, is a questionable seminar/teaching according to Watchman Fellowship, and the Spiritual Counterfeit Project whom I contacted. Will YWAM ever learn? Does it care about sound theology? About accountability? I conclude “no,” and assert that with the combined problems of theology, spiritual abuse, and a resistance to correction, YWAM is not a credible organization.

This is an authorized mirror of a web page written by someone who has been involved in Youth With A Mission. The writer uses a pseudonym.

The article, posted here by permission, dates back to 1996, and reflects information that was current at the time. It has been edited slightly, for instance to introduce a link to Alan Gomes’ book, “Lead Us Not Into Deception,” which is now available online in PDF format, and can not longer be ordered from him by email. The gist of the articles has not been affected. 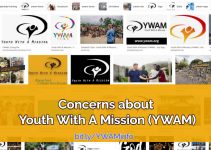