One of the tasks of apologetics – the branch of theology concerned with the intelligent presentation and defense of the historical Christian faith – is to counter heresy (the opposite of orthodoxy) with sound doctrine.

[d]octrine which is erroneous in such a way that Christians must divide themselves as a church from all who teach or accept it; those adhering to heresy are assumed to be lost, although Christians are unable to make definitive judgments on this matter. The opposite of orthodoxy. Adj.: “heretical.”
– Source: A Biblical Guide To Orthodoxy And Heresy, Christian Research Journal, Summer 1990, by Robert M. Bowman.

The entry addresses heresy from a Christian perspective. However, the term is used in other religions as well.

Elsewhere, however, in the New Testament it has a different meaning attached to it. Paul ranks “heresies” with crimes and seditions (Gal. 5:20). This word also denotes divisions or schisms in the church (1 Cor. 11:19).

In Titus 3:10 a “heretical person” is one who follows his own self-willed “questions,” and who is to be avoided. Heresies thus came to signify self-chosen doctrines not emanating from God (2 Pet. 2:1).
– Source: Heresy, Easton Bible Dictionary

A person who teaches heresy is called a heretic. A church, movement or organization that claims to be Christian, but which nevertheless teaches heresy, is a cult of Christianity. Christians who have not learned discernment easily fall prey to such groups. 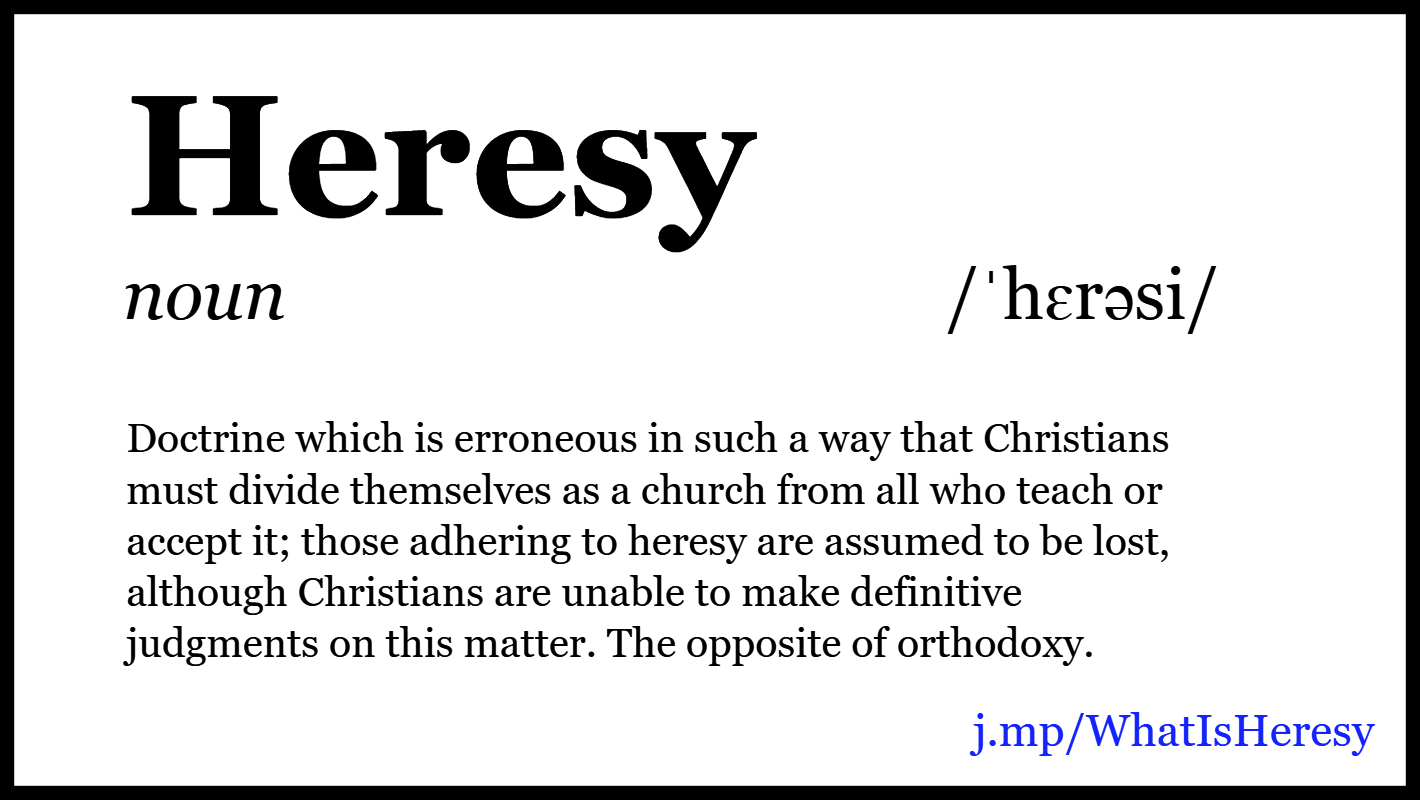 You are welcome to share this image on social media or elsewhere.

Table of Contents hide
1 Heresy vs. the Essential Doctrines of the Christian Faith
2 Unpopular Subject

Heresy vs. the Essential Doctrines of the Christian Faith

Charges of heresy are most serious where they involve deviation from – or denial of – the central, essential doctrines of Christianity:

In today’s “that’s true for you, but not for me” society identifying heresy – a process that necessarily involves discernment and judgment – is unpopular, and yet necessary:

Within late twentieth-century North American Christianity, heresy has become an unpopular word. Can’t we all just get along and live together in peace? Unfortunately the answer is no. Peace cannot be purchased at the expense of truth. In 1 Timothy, Paul writes that we are to pay close attention to ourselves and the doctrine and to continue in it, for in doing so we shall save both ourselves and those who hear us (1 Tim. 4:16). There is an inviolable core to the Christian faith. Harsh as it sounds, to violate that core is to place ourselves outside the Christian tradition. This is the essence of heresy, and heresy remains a valid category for today. This is not to endorse a McCarthyism that finds heretics under every rock. Nor is it to end the action of God’s grace in anyone’s life. But it is to own up to the fact that truth is never supplemental but always fundamental to Christian community.
– Source: William A. Dembski, The Task of Apologetics, in Unapologetic Apologetics, edited by William A. Dembski and Jay Wesley Richards, InterVarsity Press, Downers Grove, Illinois, 2001. Page 43.