Jung Myung-seok [sometimes written as ‘Jong Myong Suk’ of ‘John Myung Seok’] is the leader of a religious movement considered to be, theologically, a cult of Christianity. Sociologically the movement is a cult as well. 1

…coincidentally — or perhaps not — are the same as “Jesus Morning Star,” a reference to Revelations 2:24-29, in which Jesus promises believers, “He shall rule them with a rod of iron . . . and I will give him the morning star.”
– Source: “Love’ cult snares students, The Japan Times, Japan, Oct. 27, 2002

Within the movement, followers of Jung are called Morning Stars (MS or MSes).

While many Koreans have English names, Myung Seok does not translate to Joshua. We are told that “[h]is choice of Joshua was probably because he relates himself to Joshua of the OT leading the Israelites into the Promised Land. He claims this history is repeating on a large scale.” The same research also states that “[h]is name usually isn’t given initially to potential members because they don’t want to give them the opportunity to research for themselves.”

Jung’s movement, Providence, was founded in South Korea. In Japan, the group is known as ‘Setsuri,’ the Japanese word for ‘providence.’ 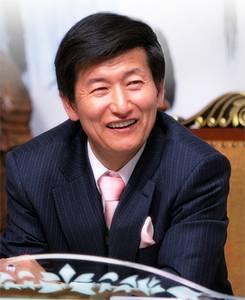 In his youth, Jung Myung-seok was a member of the Unification Church, the cult of Christianity founded and operated by Sun Myung Moon. When he started his own religious movement Jung, like Moon, also claimed to be the Messiah.

Jong, age 57, is said to have joined the Unification Church in his teens, but left to establish his own religion around 1980. It now claims 150,000 adherents in Korea and from the late 1980s also began making inroads in Japan, where it has attracted more than 1,000 members. Recruitment activities typically take place on college campuses, through infiltration of sports clubs and other extracurricular circles.

“The church’s doctrine is composed of the so-called “30 precepts,’ although it’s pretty clear that they’re derived from the Unification Church,” explains Toyoshige Aizawa, a Christian minister engaged in weaning young people away from cults.

“Jong has twisted the biblical story of Adam and Eve to deal with sex, saying, “To atone for Adam and Eve’s original sin, which was visited upon all mankind, it’s necessary to engage in intercourse with the Lord.’ In this case, he means himself, since he claims to be a reincarnation of Jesus.”
– Source: “Love’ cult snares students, The Japan Times, Japan, Oct. 27, 2002

The JMS 30 lesson Bible course is almost identical to billionaire Sun Myoung Moon’s “Divine Principles,” the Bible course of his Unification Church, the difference being which leader each course identifies as the Messiah. In his teens, Jeong was reportedly a follower of Moon; undoubtedly, that is where he learnt claiming to be God can be profitable.

The English 30 lessons never give Jeong’s full name. He is referred to as “Our founder” or “R,” short for rabbi, ironic since Jeong has praised Hitler. On English websites he is called either Joshua Jung or Joshua Lee. Students taking this course are never allowed to take the materials home with them. This control of information makes it harder for students to reflect critically on the material.

The “Providence” movement of Joshua Jung rests heavily upon two principal beliefs: that 2000 years ago, the work and message of Jesus Christ were not complete, and that we now live in a new time period that requires a new understanding of scripture and a new “Lord”.

This second point is significant in that it gives license to Jung to reinterpret any aspect of traditional teaching by labeling it as newly inspired revelation. Many terms such as “resurrection” and “born again” take on new meaning based upon his interpretations and his new understanding of the bible’s figurative language.

However, it is the first point that flies in the face of sound biblical doctrine. Jung teaches that the salvation message of Jesus was incomplete, having been interrupted through man’s interference and subsequent crucifixion of Christ. Because of this, he teaches that we cannot truly experience the “better” resurrection unless we follow the new revelation of his teachings.
[…]

[T]he teachings of Joshua Jung go far beyond doctrinal differences. His proclamation that he is the “Lord of the Second Coming” is blasphemous. His insistence that the bible is to be interpreted through his teaching because he alone is the “one who receives Jesus’ spirit, power, mission and heart” is blasphemous. His belief that believers are to “get out of a literal understanding of the Bible” is dangerous and makes one vulnerable to any man’s interpretation.
– Source: Providence Teachings, Providence Cult Watch

Jung Myung-seok, is a convicted rapist and some followers are his spiritual brides. The Feed (SBS, Australia) reveals the Australian operation of the secretive Korean church – Providence.

Controversy has followed Jung Myung-seok since at least 1999 when he fled Korea with a lawsuit pending against him. He was formally charged in 2001, and became an international fugitive in 2002:

Jung, who established the cult nearly three decades ago, has been wanted by both Interpol and the South Korean government since 1999 after rape allegations became public, according to several Asian newspaper reports.

Jung was formally charged with rape in 2001, and was captured in Hong Kong in 2003, but posted his own bail and avoided South Korean extradition charges. His whereabouts have been unknown since then, although he is rumored to be hiding in China, according to Peter Daley, an English professor at South Korea’s Keimyung University and a dedicated critic of Jung who established an extensive Web site aimed at exposing GACP’s activities after his roommate became involved with the cult.

Since the allegations became public, numerous other women have come forward with similar accusations. According to July reports from Japanese newspaper Asahi Shimbun, more than 100 women have said they were sexually abused or raped by Jung under the pretense of religious purification.

“There is a history of abuse with this group,” Daley said. “So many girls get raped by its leader.”

GACP is most active in Asian countries but has branches worldwide, Daley said. It concentrates its membership recruitment activities at elite universities, including the University of Tokyo, Kyoto University, Osaka University, National Taiwan University and, recently, UCSD.

“Most of the former members I have spoken to encountered JMS on a university campus,” Daley stated in a February 2006 article in the Keimyung Gazette. “Younger girls are also targeted for recruitment.”

The cult seeks members, according to Asahi Shimbun, by organizing sporting events, modeling shows, dance shows and other activities before inviting participants to Bible study sessions, where they are subsequently influenced to accept cult teachings that declare Jung as the true messiah and regulate members’ sleeping and eating patterns. Former members have said that the group engages in brainwashing and extensive secrecy, and uses fun activities to build trust with recruits before introducing them to Jung’s teachings.
– Source: Alleged Cult Sows Seeds Via Campus Event, The Guardian, University of California, San Diego, USA, Nov. 13, 2006

Jung Myung-seok was arrested in Hong Kong in 2003 for visa violations but later fled an extradition hearing. China extradited him to Seoul in February 2008.

Upon appeal, the cult leader was jailed for 10 years in February 2009.