Previous page: What is Apologetics? 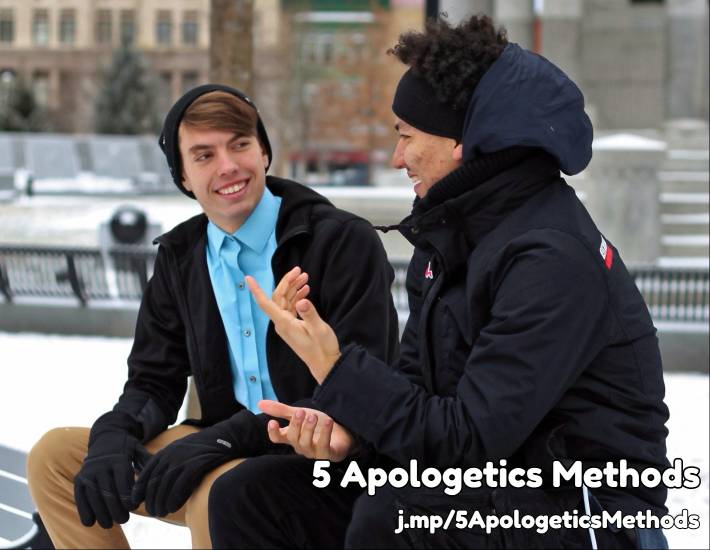 5 apologetics approaches to sharing your Christian faith with others.

Five Views on Apologetics examines the ”how to” of apologetics, putting five prominent views under the microscope. Classical, Evidential, Presuppositional, Reformed Epistemology, and Cumulative Case. Offering a forum for presentation, critique and defense, this book allows the contributors for the different viewpoints to interact.
– Source: Back Cover: Five Views on Apologetics

[T]hese five apologetic methodologies do not constitute an exhaustive list of apologetic approaches. They do represent, however, the most well-known and popular argumentative strategies in the scholarly apologetics community.

The classical method is an approach that begins by employing natural theology to establish theism as the correct worldview. After God’s existence has thus been shown, the classical method moves to a presentation of the historical evidences for the deity of Christ, the trustworthiness of the Scripture, et cetera, to show that Christianity is the best version of theism, as opposed to, say, Judaism or Islam. This school is called the ”classical” method because it is assumed that this is the method used by the most prominent apologists of earlier centuries. William Lane Craig contributes this volume’s defense of classical apologetics. Other contemporary apologists who may be classified at classical apologists include R.C. Sproul, Norman Geisler, Stephen T. Davis, and Richard Swinburne.

It is usually argued that the order of the two phases in classical apologetics is essential. That is, before one can meaningfully discuss historical evidences, one has to have established God’s existence because one’s worldview is a framework through which miralces, historical facts, and other empirical data are interpreted. Without a theistic context, no historical event could ever be shown to be a divine miracle. The flipside of this claim is that one cannot appeal to alleged miracles in order to prove God’s existence. As Sproul, Gerstner, and Lindsley argue, ”miracles cannot provie God. God, as a matter of fact, alone can prove miracles. That is, only on the prior evidence that God exists is a miracle ever possible.” However, not everyone who considers himself or herself a classical apologist will insist on this point, as William Lane Craig makes clear in this volume (…). Craig argues that the classical methodology need not insist on a theoretical necessity in the order of these two steps, but only, given the nature of probabiblity arguments, that this order is the best argumentative strategy.

The evidential method has much in common with the classical method except in solving the issue concerning the value of miracles as evidence. Evidentialism as a apologetic method may be characterized as the ”one-step” approach. Miracles do not presuppose God’s existence (as most contemporary classical apologists assert) but can serve as one sort of evidence for God. This method is fairly eclectic in its use of various positive evidences and negative critiques, utilizing both philosophical and historical arguments. Yet it tends to focus chiefly on the legitimacy of accumulating various historical and other inductive arguments for the truth of Christianity.

Given this focus, evidentialists may and will aruge both for theism and Christian theism at the same time without recourse to an elaborate natural theology. They might begin, for instance, by arguing for the historical factuality of Jesus’ resurrection and then argue that such an unusual event is explicable only if a being very much like the Christian God exists. Having then established God’s existence via Christ’s miraculous resurrection, the evidentialist would then go on to contend that Jesus’ resurrection also authenticates his claims to be God incarnate and his teaching on the divine authority of Scripture.

Besides Gary Habernas, one of the contributors to this book, advocates of evidentialism include John W. Montgomery, Clark Pinnock, and Wolfhart Pannenberg (and see Harberna’s article for a host of others that he classifies under this method).

The third of the Big Four is the cumulative case method. The term ”cumulative case” is used by apologists in ways different than we are using it in this context, but Basil Mitchell, an early proponent of this view, gave this method that name, and so will wil use it here. The careful reader will no doubt note that this method belongs to the same broad family of methods as does the evidential (and perhaps classical) method. However, it will also be apparent that as an argumentative strategy, the cumulative case method has something distinctive to offer. Indeed, this approach to apologetics arose because of the dissatisfaction that some philosophers had with these other evidential-type methods (i.e., the first two of the Big Four).

According to advocates of cumulative case apologetics, the nature of the case for Christianity is not in any strict sense a formal argument like a proof or an argument from probability. In the words of Mitchell, the cumulative case method does ”not conform to the ordinary pattern of deductive or inductive reasoning.” The case is more like the brief that a lawyer makes in a court of law or that a literary critic makes for a particular interpretation of a book. It is an informed argument that pieces together several lines or types of data into a sort of hypothesis or theory that comprehensively explains that data and does so better than any alternative hypothesis.

Paul Feinberg, this volume’s cumulative case methodologist, says that ”Christian theists are urging that [Christianity] makes better sense of all the evidence available than does any other alternative worldview on offer, whether that alternative is some other theistic view or atheism.” (…). The data taht the cumulative case seeks to explain include the existence and nature of the cosmos, the reality of religious experience, the objectivity of morality, and certain other historical facts, such as the resurrection of Jesus.

Beside Feinburg and Mitchell, the cumulative case school would likely include C.S. Lewis and C. Stephen Evans.

Due to the noetic effects of sin, presuppositionalists usually hold that there is not enough common ground between believers and unbelievers that would allow followers of the prior three methods to accomplish their goals. The apologist must simply presuppose the truth of Christianity as the proper starting point in apologetics. Here the Christian revelation in the Scriptures is the framework through which all experience is interpreted and all truth is known. Various evidences and arguments can be advanced for the truth of Christianity, but these at least implicitly presuppose premises that can be true only if Christianity is true. Presuppositionalist attempt, then, to argue transcendentally. That is, they argue that all meaning and thought – indeed, every fact – logically presupposes the God of the Scriptures.

John Frame represents presuppositionalism in this volume, and he puts the matter this way: ”[We] should present the biblical God, not merely as the conclusion to an argument, but as the one who makes argument possible” (…). By demonstrating that unbelievers can not argue, think, or live without presupposing God, presuppositionalists try to show unbelievers that their own worldview is inadequate to explain their experience of the world and to get unbelievers to see that Christianity alone can mkae sense of their experience.

Other presuppositionalists include Cornelius Van Til and Gordon Clark (…), as well as Greg Bahsen and Francis Schaeffer.

These four apologetics methods were vying for supremacy when I first developed apologetics and the problem of methodology in the early eighties. However, a lot has happened in the last twenty or so years in philosophy and apologetics. One of the most dramatic developments has been the arrival of Reformed epistemology. Kelly James Clark contributes to this volume with the suggestion that this new religious epistimology has something distinctive to say with regard to apologetics methodology.

‘‘Since the Enlightenment,” Clark says, ”there has been a demand to expose all of our beliefs to the searching criticism of reason.” (…). We are told that if a belief is unsupported by evidence of some kind, it is irrational to believe it. Reformed epistemology challenges this ”evidentialist” epistemological assumption. Those who advocate this view hold that it is perfectly reasonable for a person to believe many things without evidence. Most strikingly, they argue that belief in God does not require the support of evidence or argument in order for it to be rational. The Reformed epistemology apologist will not necessarily eschew making positive arguments in defense of Christianity, but will argue that such arguments are not necessary for rational faith. If Calvin is right that human beings are born with an innate sensus divinitatis (sense of the divine), then people may rightly and rationallly come to have a belief in God immediately without the aid of evidence.

For the Reformed epistomologist, then, the focus will tend to be on negative or defensive apologetics as challenges to one’s theistic belief are encountered. On the positive side, however, the Reformed epistemologist will, in the words of Clark, ”encourage unbelievers to put themselves in situations where people are typically taken with belief in God” (…), attempting to awaken in them their latent sense of the divine.

The list of contemporary Reformed epistemologists includes this volume’s contributor, already noted, Kelly James Clark. But four other names that would head that list would be Alvin Plantinga, Nicholas Wolterstorff, George Mavrodes, and William Alson.

Again, let me say that these five apologetic methodologies do not constitute an exhaustive list of apologetic approaches. They do represent, however, the most well-known and popular argumentative strategies in the scholarly apologetics community. It is my hope, as well as that of the other contributors, that this work promotes additional fruitful discussion of apologetic methodology and proves to be of service to the church universal and our Lord Jesus Christ.
– Source: Cowan, Steven B. Editor, Five Views on Apologetics, Zondervan, Grand Rapids, Michigan, 2000. Pages 15-20

This is a collection of hand-picked articles about the branch of theology known as Christian Apologetics.

Previous page: What is Apologetics?