Table of Contents hide
1 Apologetics Definition
2 Apologist: someone who engages in the study and practice of apologetics
3 Purpose: Evangelism and Boundary Maintenance
4 Five Approaches to Apologetics Ministry

Apologetics – from the Greek “apologia,” a legal term meaning “defense” – is the branch of Christian theology concerned with the intelligent presentation and defense of the historical Christian faith.

[See also the definition for apologist]

But sanctify the Lord God in your hearts, and always be ready to give a defense to everyone who asks you a reason for the hope that is in you …
– Source: 1 Peter 3:15 NKJV

The word translated as ‘defense’ (some translations have ‘answer’) in that verse is the Greek apologia:

“Answer” is the Greek apologia, from which we get our word “apologetics,” meaning the careful, logical defense of the Christian faith against the attacks of its adversaries, showing its validity as the true saving gospel of God, our Creator and Savior.

In effect, Peter is admonishing believers to be always prepared to give an apologetic for the faith, especially when confronted by those who deny it and would destroy it if they could. This surely means that there is an effective apologetic that can be given, and it is each Christian’s responsibility to study (2 Timothy 2:15) and be ready to give it when needed.

In contrast, the unbeliever is “without excuse” (Romans 1:20), “without an apologetic.” His faith is strictly based on credulity and wishful thinking, not historical and scientific evidence like that for the Christian faith.
– Source: Defenders Study Bible

Christianity is under attack today, and it must be defended.

There are attacks from within–from cults, sects, and heresies. And there are attacks from without–atheists, skeptics, and other religions. The discipline that deals with a rational defense of the Christian Faith is called apologetics. It comes from the Greek word apologia (cf. 1 Peter 3:15) which means to give a reason or defense.
– Source: The Need For Defending The Faith by Norman Geisler.

The late Greg Bahnsen, who was an apologist, put it this way:

By studying the objections of unbelievers and preparing to reason with them, we take the high road of apologetics, the road of obedience to the direction of our Lord and Savior. His categorical claim was “I am the way, the truth, and the life; no one comes to the Father except through Me” (John 14:6).

The apologist responds to the objections of unbelievers in a way which sets forth the objective truth of Christianity and the exclusive character of the system. He or she offers reasons for belief, vindicating the Christian worldview over against competing systems of thought and living.
– Source: Anwering Objections by Greg Bahsen

Apologist: someone who engages in the study and practice of apologetics

The words derive from the Greek apologia (“defense”) and apologeo (“to defend”). [Apologia Report] bears that name for this very reason. The word apologia is found in 1 Peter 3:15, commonly regarded as the classic text regarding apologetics.

Anyone who takes the study and practice of apologetics seriously may be called an apologist.

Of course, some persons are especially gifted and equipped for this ministry, and in a narrower sense these are the people we mean when we speak of apologists. But in the broader sense, to paraphrase Moses, would that all of the Lord’s people were apologists!
– Source: Robert Bowman, Jr., author of A Biblical Guide to Orthodoxy and Heresy

Apologetics ministry has a dual purpose:

Five Views on Apologetics examines the “how to” of apologetics, putting five prominent views under the microscope. Classical, Evidential, Presuppositional, Reformed Epistemology, and Cumulative Case. Offering a forum for presentation, critique and defense, this book allows the contributors for the different viewpoints to interact.
– Source: Back Cover, Five Views on Apologetics

On the following page you will find an excerpt of the book’s introductory chapter, outlining five prominent apologetics methodologies. 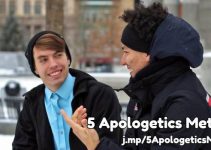