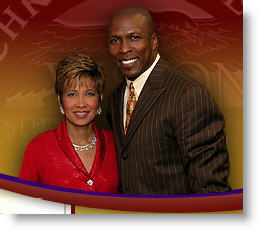 Called as a couple with apostolic leadership, Bishop and Pastor Hornbuckles’ involvement extends beyond the boundaries of the spiritual community. Bishop Terry Hornbuckle, a Spiritual Advisor to Dallas Cowboys players. Pastor Renee’ owns and operates Women of Influence, Inc.– a ministry catering to women from all walks of life. Together, they founded Children of Destiny, a non-profit organization benefiting at-risk youth and they authored Forty Golden Nuggets That Will Lead You Into the Promised Land. Completed projects include The Destiny Center Gymnasium, a facility with over 10,000 square feet of educational, administrative, and performing arts space.
– Source: Our Pastors, Agape Christian Fellowship. Last accessed Aug. 17, 2006

[a] high-ranking Christian cleric, in modern churches usually in charge of a diocese and in some churches regarded as having received the highest ordination in unbroken succession from the apostles.
– Source: Bishop American Heritage Dictionary

In Christianity, the doctrine that bishops represent an uninterrupted line of descent from the Apostles of Jesus. This succession gives bishops special powers, including the right to confirm church members, ordain priests, consecrate bishops, and rule over the clergy and church members of a diocese. Clement, bishop of Rome, stated the doctrine as early as AD 95, and it is accepted by Roman Catholic, Eastern Orthodox, Old Catholic, and several other churches. Some Protestant churches maintain that succession is spiritual and doctrinal rather than ritual and historical.
– Source: Apolostolic Succession, Encyclopedia Brittanica