God TV started out in 1997 as “The Christian Channel Europe.” In 1997 it was renamed “God Channel,” and in 2002 this international television network took on its current name.

God TV, which broadcasts from Jerusalem, presents itself as a Christian TV network. 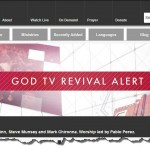 However the station comes across like copy-cat version of the Trinity Broadcasting Network, which is notorious for broadcasting countless preachers and teachers whose teachings and practices range from aberrant to heretical.

The line-up reads like a Who’s Who of Word-Faith and Prosperity Gospel preachers, mixed with some folks who consider themselves ‘prophets’ or ‘apostles,’ 1 and others who manufacture who they call ‘revivals.’

The station was founded by Rory and Wendy Alec.

Rory, who currently is the network’s Chief Executive Officer, and Wendy, God TV’s Creative Executive Officer, were recognized by Charisma magazine in 2005 as being among “30 Emerging Voices who will impact the future of the American Church.”

We think that’s a shame, because many Christians who watch teachers on stations like God TV do not have much — if any — discernment, and are thus unable to tell apart truth from error.

In October 2014, The Telegraph published a report titled, “God TV in turmoil as tearful TV preacher admits split with husband”:

A Christian evangelical TV network based in Jerusalem and Plymouth is in turmoil after the wife of the founder revealed he had run off with another woman under the influence of “the devil”.

God TV has set a goal of reaching “one billion” souls but the troubles of the couple that founded the channel, Rory and Wendy Alec has sent shock waves through the ranks of their followers.
Thousands are believed to tuned in to a special broadcast from Jerusalem in which Wendy revealed that her husband was living on a farm in South Africa with a jazz musician.

Mrs Alec, who was supported in the broadcast by Canon Andrew White, the vicar of St George’s Church in Baghdad, said she had anticipated her troubles from the beginnings of her marriage to her childhood sweetheart.

But as the wartime slogan “keep calm and carry on’ strapline rolled across the screen, Mrs Alec said she was astounded how easily the devil had invaded and destroyed her marriage. […]
– Source: The Telegraph, God TV in turmoil as tearful TV preacher admits split with husband, Oct. 10, 2014