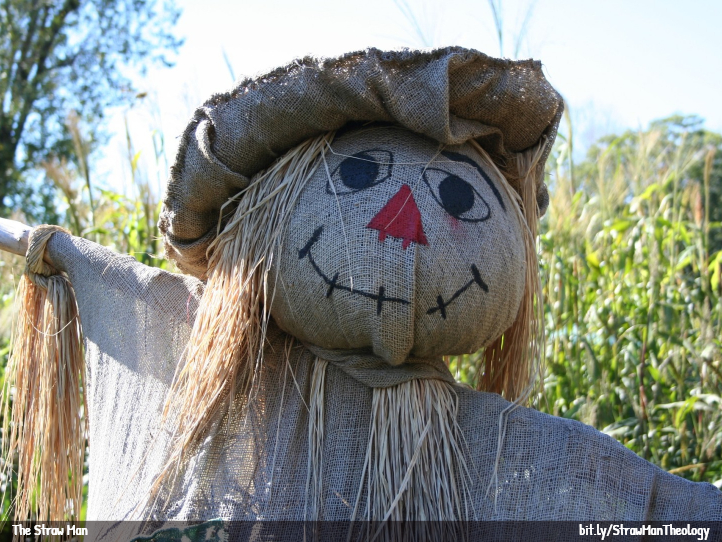 I find that the straw man fallacy is used with alarming frequency in religious/theological debates. T. Edward Damer explains the fallacy as follows:

“‘Straw man’ is one of the best-named fallacies, because it is memorable and vividly illustrates the nature of the fallacy. Imagine a fight in which one of the combatants sets up a man of straw, attacks it, then proclaims victory. All the while, the real opponent stands by untouched…As the ‘straw man’ metaphor suggests, the counterfeit position attacked in a Straw Man argument is typically weaker than the opponent’s actual position, just as a straw man is easier to defeat than a flesh-and-blood one. Of course, this is no accident, but is part of what makes the fallacy tempting to commit, especially to a desperate debater who is losing an argument…attacking a straw man is a sign of weakness.” 1

Many times this fallacy is committed by sincere people who do not understand the view they criticize. Most often this results from failure to do primary source reading from representatives of those whose views they criticize. It should go without saying that before one openly criticizes a view they should be thoroughly familiar with the view as explained by its most articulate advocates.

At other times, however, it seems clear that the one resorting to the straw man is aware of his or her misrepresentation. As an example, I have heard from many Antinomians that “regular Christians” (orthodox believers) focus almost exclusively on hell with an unhealthy obsession — preaching incessantly on the agonies of hell-fire.

Using the straw man fallacy is irresponsible at best and dishonest at worst. When one publicly criticizes a view, they should be certain they know precisely what they are talking about. Better to be frustrated in silence than to slander someone else. Do your primary source homework. Have specific quotations (in context) and real-life examples at hand. Be sure the one you cite and quote from actually represents the specific view you are addressing. Charles Finney, for example, was not a true Arminian and it is unfair to Arminians to attribute Finney’s Pelagian views to Arminians who reject them. Critiques and correction are often needed, but we should be sure we know what we are talking about when offering these, and that we are fairly representing the view we critique.

As a postscript, I must note that sometimes people hide behind a false accusation that a straw man argument is being used. I have found this to often be the case with Mormons, for example, who try to masquerade as a branch of Christianity when witnessing, and act as though they have been slandered when their false teachings are exposed. This makes it needful for those who would witness to Mormons to spend time reading Mormon literature to be able to refute the Mormon, straw man defense. Real straw men abound but sometimes real men are hiding in straw. Either way, we must do our primary source homework to responsibly and effectively engage those who represent a differing view.