[I wrote the following, satirical piece a few years ago while concentrating my studies on postmodernism].

In Postmodernity it’s easy to be a scholar in any field, including theology! Just follow the ten easy steps below.

1) Regurgitate
You must first conform to postmodern vocabulary by regurgitating and making liberal use of the latest and coolest words such as “deconstruct,” “community,” “narrative,” “authentic,” “postfoundational,” “paradigms,” “models,” “connectivity,” “generous,” “missional,” “new,” “signify,” “reductionist,” and “matrix.”

“The giving-wayness of reductionist systems reconceptualizes the authentic matrix of deconstructed, community paradigms; signifying the emergence of postmodern narratives which produce a more generous, missional model of new, postfoundational connectivity.”

2) Create
To stand out you must create new jargon and mix it with the standard, postmodern vocabulary. This lets you substitute style for substance by just sounding sophisticated! Simply follow the pattern below to create and use your jargon:

D. You must then use your jargon frequently for it to gain credibility.
“Televisional broadcasticity causes a new, missional matrix.”
“Efforts to impose one’s own narrative are subject to factized post-destereoization”
“Outdated, propositional, signifiers are rephasing to the deconstruction inherent in the rehistoricalized narrativeness discovered in new community paradigms.”

3) Separate
Nothing screams “scholar” these days like categories. Separate into sub-groups whatever phenomenon your are interested in. There is no need to validate this with research. Just invent categories to go along with your jargon!

4) Integrate
Now that you have your categories, make up some way they are interacting:

“Decreased activity among those who embrace reenhanced definitional broadcasticity has caused modalities in the deelectrified level to reexamine their outlet paradigms. This leads to new, community models of connectivity.”

5) Speculate
Since “truth” is no longer enslaved to any real world referent, your “truth” is as valid as any if it pleases postmoderns.

If a modern disagrees with your truth just say that he or she ”misunderstood” you. This always trumps modern argumentation since you “mean” whatever suits you at the moment!

6) Instigate
The spirit of postmodernism is the spirit of rebellion. You will only sound intellectually cool if you advocate change.

“Intelligent, audio, broadcasticity signifiers are no longer tenable in a time when experiential viewerizing has replaced content watchedness. Postmodern broadcasters must respond to this paradigm shift with a total rejection of understandable, speech- event signifiers in favor of a new randonimity of audio experience waves.”

7) Obfuscate
Postmodernism enables you to create a public understanding that differs from your private meaning:

“We did not have unethical relations with that company, Reductionist Broadcasticity.”

Skillful communicators can also mean different things to different people at the same time. Speaking out of both sides of the mouth is now a respectable, scholarly enterprise! Say just enough for your friends to know what you really mean but not enough that your critics are able to point to specific, incriminating statements. Enjoy frustrating your critics!

“Our current economic, desaturation phase requires us to transact deelectrified, televisional units.”
Tell critics this means “In the current economy it is cost effective to manufacture energy efficient televisions.”
Cohorts know you really mean “Since we are going broke, we plan to maximize profits by selling televisions with no power cords or power supplies.”

When critics catch on to your obfuscation, use #10 below.

8) Debate
Since we are no longer bound by logic, we may use fallacies with impunity. It no longer violates any rules! One need not get too complex with this. The old one-two punch of straw man / false dilemma works most effectively.

2. Present your own views (which you may have cosmetically 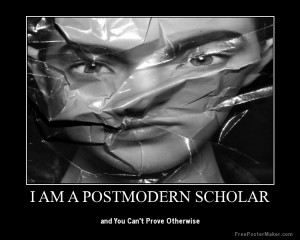 altered for the moment) as the only alternative to the straw man.
You Win!

9) Destabulate
This is only new, postmodern babble. I just made it up. If you do whatever it means to you, it will be your, authentic truth.

10) Pontificate
Remember, you need not substantiate your jargon, categories, speculation, or integration with research or data. Nor need you explain your obfuscation. Your scholarship is authentic to you and that is all that matters! Just say it loud. If anyone questions your work, simply call them names and say they are mean. This really works these days. Enjoy being a scholar!