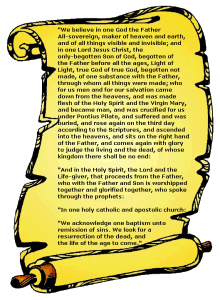 In this article, James J. Cassidy reviews the book Doctrine: What Christians Should Believe by Mark Driscoll and Gerry Breshears. Cassidy defers to reviews already written in order to focus on a point that concerns him — Driscoll and Breshears rejection of the wording of the Nicene Creed as it relates to the personal properties of Christ and the Holy Spirit (I will limit my comments here to the dynamic between the Father and the Son).

I would be the first to agree that the wording of creeds must take a back seat to the wording of Scripture and thus differing with a creed is not wrong in itself. I would also be quick to concede that there has been some controversy over the meaning of the Greek word monogenes as it is used in John 1:14 and 3:16 (see S. Michael Houdmann’s brief article). Some good scholars believe the word means “unique son” and not “only begotten.”

Nevertheless, the Bible uses the plain term for begotten (gennao) with reference to the Father and Son in Acts 13:33, Hebrews 1:5, and 5:5. Gennao is also used of the relationship between the Father and the Son in 1 John 5:18 in which Christ is described as “He who was born of God.”

In the Theological Dictionary of The New Testament, F. Buchsel applies the full, christological teaching of the New Testament to our understanding of John’s use of monogones:

“John does not lift the veil of mystery that lies over the eternal begetting, for he aims to awaken faith rather than give systematic knowledge. Yet eternal begetting is an implication of monogenes in its distinctive application to Jesus.” 1

The Nicene Creed very neatly avoids the Arian heresy by insisting this begetting is from eternity past. “Begotten” describes the dynamic relationship between these persons of the godhead but it does not insinuate that the Son was created or made:

“We believe in one God, the Father, the Almighty, maker of heaven and earth, of all that is seen and unseen. We believe in one Lord, Jesus Christ, the only Son of God, eternally begotten of the Father, God from God, light from light, true God from true God, begotten, not made, one in Being with the Father. For us and for our salvation he came down from heaven, by the power of the Holy Spirit he was born of the Virgin Mary and became truly human. For our sake he was crucified under Pontius Pilate; he suffered, died and was buried. On the third day he rose again in fulfillment of the Scriptures; he ascended into heaven and is seated at the right hand of the Father. He will come again in glory to judge the living and the dead, and his kingdom will have no end. We believe in the Holy Spirit, the Lord, the giver of life, who proceeds from the Father [and the Son]. Who with the Father and the Son is worshiped and glorified. Who has spoken through the prophets. We believe in one holy catholic and apostolic Church. We acknowledge one baptism for the forgiveness of sins. We look for the resurrection of the dead, and the life of the world to come. Amen.”

The wording we find in the creed was carefully hammered out over centuries to include biblical teaching but fence out heresies — including modalism and tritheism which are both excluded by the description of the Son’s being begotten and the Spirit’s procession. The dynamic the creed describes maintains the distinction in personhood as well as their triune unity.

The wording of the Nicene Creed has thus been a standard part of historical orthodoxy. To reject its wording is imprudent and leaves the door open for heresy. I believe the wording of the creed is both biblical and wise.

James J. Cassidy expresses similar thoughts in the article already referenced. My only real difference with Cassidy would be his narrow recommendations regarding good books on doctrine. I would add such books as William Evans’ Great Doctrines of the Bible, Millard Erickson’sChristian Theology, and Wayne Grudem’s Systematic Theology to the list, just to begin with.
________________

“To the Christian, doctrine is unavoidable. Ours is never a choice between doctrine and no doctrine, but between sound doctrine and false doctrine. This is nowhere more urgent than when we are talking about the Christ, who is the object of our faith.” — R.C. Sproul