The avant garde make us laugh sometimes but the social and religious implications of their movements are quite serious. Avant garde philosophy, art, and music is often the butt of jokes and ridicule by those of us who are not participants. One of the most lauded pieces of avant garde art is Marcel Duchamp’s “Fountain,” which is  nothing but a urinal on display. The avant garde know that most of us are laughing at them but they would not have it any other way.

Postmodernism is an avant garde movement that has become unusually popular in academic circles. Witness the seriousness with which the postmodern notion is taken that insists spoken or written communication has no set, objective meaning, and that the author or speaker’s intent is irrelevant since a text means “whatever it means to me.” Language is seen as just a form of play.

Of course, even postmoderns cannot live in the world they portray. Postmodern thinker Jacques Derrida is probably most well-known for his saying, “There is nothing outside the text; all is textual play with no connection with original truth” 1 (a posture that robs language of meaning determined by the author or speaker). On one occasion, however, Derrida wrote a lengthy reply to John Searle’s critique of his theories, complaining that Searle misrepresented him and should not have since his points should have been clearly understood! 2

Postmodern poetry, such as the short excerpt below from Michael Giardina’s “Food For Rejecting His Feet”  is nothing more than playfulness with words — a luxury Giardina could indulge in within the confines of poetry though not in the real world where something such as a stop sign is not considered open to private, subjective interpretation.

The building filled with cream and
greenery seeped into the water.
Yellowed bodies plunged
into cans of puréed corn.

Avant garde music need not consist of anything at all. John Cage’s 1942 classic “4’33” consists of four minutes and thirty three seconds of silence. Amusingly, musician Mike Batt recorded a piece he called “A One Minute Silence” which consisted of 60 seconds of silence. Cage’s publishers’ sued Batt for plagiarizing Cage’s silence. Though Batt tried to maintain that his silence was different from Cage’s in that his silence was digital and Cage’s was analog, he eventually paid a six figure settlement over the suit. 3

What is most disconcerting is how seriously this kind of folly is taken within the world of the avant garde. Witness the utter seriousness with which Cage’s “4’33” is treated by reviewer Peter Gutmann in an article written in 1999:

“… 4’33” fills a crucial slot in history. Music began as an imitation of natural sounds and human voices but then became increasingly stylized. Cage brilliantly brings the process full circle, bridging the cultural distance that has developed between conventional performance and the sounds of nature where it all began. The second hallmark is staying power. I’ve heard Mozart’s dozen mature piano concertos dozens of times each over dozens of years, but right now I can recall only a few of their melodies. I heard the Cage piece just once (and three decades ago), but I remember it so vividly. The ultimate wonder of 4’33” is the profundity of its simplicity. While staying within the concert hall, Cage transcends its rigid confines. He combines anarchy with sly humor…His result is universal, but his means are deeply personal. 4’33” is strikingly original, yet easily imitated.” 4 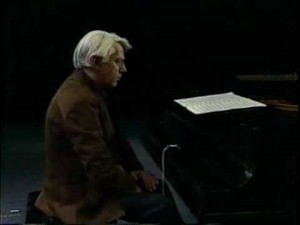 How remarkable! Gutmann was able to remember the entire content of 4’33” — something he could not do with a complex piece by Mozart! Gutmann was also impressed with the universality of 4’33” that made it “easily imitated.” How true! I am not even a gifted musician and yet I could perform 4’33” with the same excellence as Cage.

Other commentators have noted the flexibility of 4’33” that enables one to experience the piece without the need of a concert hall. I would add that the piece is so flexible that one does not need sound equipment or software of any kind. One can experience 4’33” without the use of an album or compact disc. Amazing!

There is a serious note to end on, however. With avant garde philosophy, art, and music taking on new levels of academic popularity, the only way to go from here is toward ever greater absurdity — toward the nihilism of Nietzsche and of the later Beat (beatnik) movement.

It is worth noting that Nietzsche and many leading participants in the Beat movement suffered from insanity. When life has no meaning and all is absurdity, there is nothing solid and insanity is consequently the most viable result.

Nihilism, however, cannot sustain itself as a cohesive, stabilizing force in culture. It creates a vacuum of nothingness, but natura abhorret a vacuo (nature abhors a vacuum). The most likely force to step into a vacuous, nihilistic culture in order to bring order and stability is a tyranny — something of which authors such as Francis Schaeffer and Os Guinness have warned.

It seems to me that since the philosophical turn of Immanuel Kant which divorced phenomena and noumena (perception and realtiy), the world has been slowly heading toward this scenario through an increasing movement toward meaninglessness. Nietzsche said (rightly, I think) that he was just premature — ahead of his time. In The Gay Science, Nietzsche tells a parable in which a nihilistic madman enters a market, yelling at the people who only ignore him. The madman replies, “I come too early. My time has not come yet. This tremendous event is still on its way.” 5

In the vacuum, a tyrant is likely to seize power — a scenario predicted in the Bible. The man of lawlessness will eventually appear when the time is right (2 Thessalonians 2:3). The absurdities we see in the avant garde will eventually lead to serious consequences.