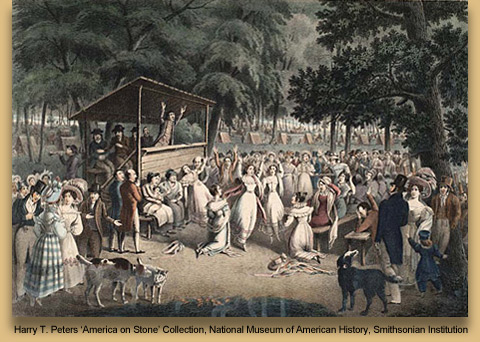 Harry T. Peters was a 19th century artist who captured various aspects of life during that time, including the camp meetings. Peters had no agenda other than accuracy and included in his portrayal some interesting phenomenon associated with the meetings.

Looking at the people who have moved to the front of the crowd close to the preacher, one can see those who have been moved upon by the Spirit of God, but scanning the perimeter of the image one sees people engaged in idle conversation, flirting, and even drinking (behind the edifice for the preacher).

Peters’ depiction actually matches the accounts given by historians. The 2nd Great Awakening (of which this camp meeting would have been part) was a genuine, revival movement.

Nevertheless, around the edges of the powerful move of God were people who were present but not a part, who observed but did not participate, who heard but did not listen, and who saw but did not seek.

I find the portrayal of the meeting to be a microcosm of revival movements in particular and church life in general. Where would we place ourselves in the picture? Are we at the front? Have we drawn near? Or are we just hanging around on the edge of what God is doing?