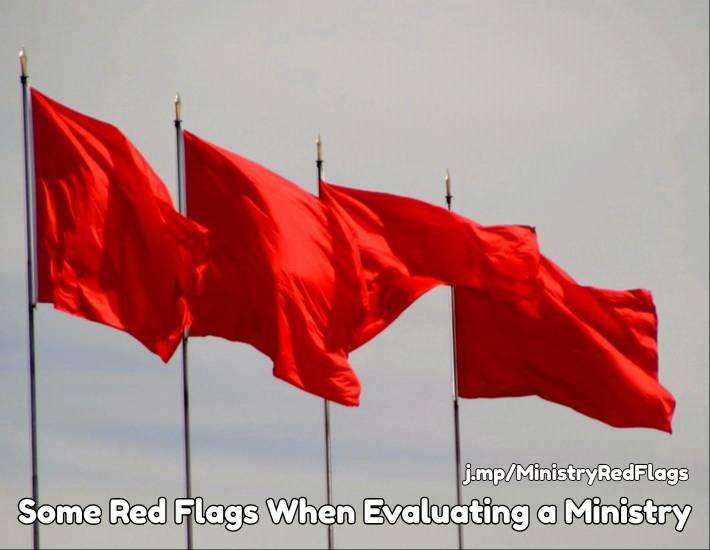 Anytime we are just getting acquainted with a ministry, we look for ways to evaluate it. Sometimes problematic elements are obvious from the beginning but at others the problems are not so evident at first. Cults and heretics often do not promote their unique, false teachings or aberrant practices to strangers and newcomers. The Unification Church and Scientology are two groups that are particularly noted for this. Still, we can look for red flags that may indicate a need for closer inspection.

A red flag differs from a false teaching or bad practice in that the red flag is a sign that something might be wrong. Upon seeing a red flag, we should never form any kind of conclusion without further information. The group or person may just be imprudent or in some sense unusual without being unorthodox or wrong in what they do. It is nevertheless useful to know the signs of possible problems with a minister or ministry. I have given below twelve such signs.

1) The absence of a statement of faith. A statement of faith tells us what a group believes. Even interdenominational ministries will usually have a basic statement of essential doctrines. These statements are ways of introducing ourselves to one another and in their absence we do not know if the group falls inside of biblical orthodoxy.

2) An incomplete statement of faith. If certain, essential items are missing from the statement we should at least wonder why. Why, for example, would a ministry leave such things as the trinity or justification by faith out of their statement? Three issues often found missing in our time are the necessity of faith for salvation, sanctified living, and hell. Omissions of this kind are no proof of error but they should raise a red flag in our minds.

3) Elitism — an elitist view on the part of the group members, who seem to feel that one is a substandard, unenlightened, or unspiritual person if they are not part of their, particular group. If people seem to glorify a group or man more than God something is often wrong with the group. Groups that think they are better than other Christians are usually worse.

4) Greater concern for proselytizing from other churches than for winning the lost. Any group that sees the mainstream church as a mission field is by definition a deviant group that sees its unique differences with mainstream Christianity as essential ones. Orthodoxy is a large enough tent to hold those who differ on non-essentials, and discussion/debate on those points can be beneficial if done in the right spirit. Orthodox groups do not see each other as mission fields, however. Only those outside of orthodoxy do so.

5) An emphasis on or overvaluing of insignificant points. This is sometimes a bad sign. Errant groups may initially introduce themselves with a point that makes no real difference in orthodox faith or right living (though they will consider the point important). A good example of this would be the Jehovah’s Witnesses‘ rhetoric on such things as non-observance of holidays, not saying the pledge of allegiance, and insistence that Jesus died on a stake rather than a cross.

6) An insistence on particular Hebrew or Greek monikers for God or Christ. It is very important to note that the particular way in which a group refers to God or Christ is not error in itself, and many orthodox groups use expressions such as Yahweh and Yeshua. Still, one should consider the insistence upon the use of a some such designation as a sign that further investigation may be called for.

Exclusive reference to God as Yahweh, Jehovah, Yah, Yahvah, or some other preferred form from the Old Testament may indicate some kind of error. Such groups sometimes insist on going back to our “Hebrew roots” in a legalistic way. The Sacred Name movement claims that God must be addressed by a form of the divine name in the Old Testament. Whichever one true name is chosen, all other terms or names for God are considered incorrect or references to false deities. Some of these groups insist on calling Jesus “Yeshua” or “Yahushua.” They believe one’s salvation depends on referring to God by His correct name. Most Sacred Name groups also teach sabbatarianism, and observe Old Testament dietary laws and feasts.

Some Black supremacist groups always refer to God as Yahweh. Several (not all) groups that insist on referring to Jesus as Yahshua are white supremacist cults that may sound orthodox at times and may even have apparently orthodox statements of faith.

There is nothing wrong in itself with using such names and there are many orthodox groups that refer to God as Yahweh or Jesus as Yeshua, particularly messianic (Christian) Jewish groups who always refer to Jesus as Yeshua. As with all red flags, this is not an evaluation but a sign that one may be a useful precaution.

7) A lack of accountability for leaders. It is dangerous if the pastor/leader answers to no one. A leader should be accountable in some way — to superiors of some kind, a loose knit group of independent ministries, or to the congregation itself.

There are some groups without this kind of accountability for the leader that are doing good things, but history has proven that the tendency in some such ministries is for the leader to eventually abuse his or her position, and sometimes go astray in doctrine. The most glaring example of this would be Jim Jones, who started his career with the Methodists and the Assemblies of God. As he opted for greater independence and less accountability (leaving Methodism and the Assemblies of God behind) Jones progressively grew more cultic and abusive.

9) A lack of financial transparency. When a ministry which does not make its budget and spending transparently available to all (not just a small, select group of faithful followers), this should be seen as a red flag. In many if not almost all cases, the reason for such secrecy is to avoid the disapproval they know others will voice if they discover how the money is spent. Many larger groups are graded by MinistryWatch with regard to their integrity, transparency, and responsibility in financial matters (http://ministrywatch.com/). Before giving to a large ministry, it may be prudent to check their score with MinistryWatch.

10) Insults directed at former members. Sometimes former church members are the ones at fault for their departure from the church and they sometimes cause problems afterward through false accusations that must be addressed. Still, some abusive churches publicly insult those who leave as a means of intimidating those in the group with the implicit message that those who leave will be seen and treated as enemies. Abusive churches can be quite charming to newcomers and the mindlessly obedient, but thinking for oneself can lead to a nightmarish experience. God does not require attendance at one, particular church. One’s attendance at any church is voluntary and it is no sin to leave.

11) A focus on bettering one’s circumstances through spiritual techniques.True Christianity is a call to believe the gospel, repent of sin, and serve God through loving Him and others. Those who focus on having happier circumstances and more luxuries, promoting spiritual techniques such as positive thinking and speaking are generally more indebted to Mind Science than properly interpreted Scripture for their emphases. An absence of the kind of moral exhortations found throughout the New Testament may indicate antinomian tendencies (lack of concern for an obedient lifestyle) in the church.

12) The group sees itself as part of a revolutionary movement in the church. This red flag is related to numbers 3 and 4 above with a subtle difference. The group glories in a whole movement rather than just their, particular church. An example of what this red flag represents can be seen in the emerging church movement. Though some, individual churches have wholly identified themselves with the movement, the movement’s goal has been a “revolution” (their own term) in the church (a goal that has largely failed). The new antinomians likewise see themselves as agents of a “grace revolution” (as with emergents, their own term) that seeks to redefine biblical concepts such as repentance and sanctification while silencing exhortations to godliness. As with the “emergent revolution,” the “grace revolution” seeks to change us all, because they think everyone but them is missing the heart of God’s message and/or methods for today. “Revolutionaries” in the church are usually just rebels fighting against orthodoxy. 1

Experienced meteorologists look for signs that bad weather may be ahead. They are not always right but they still find it helpful to know what to look for in assessing possibilities. It is helpful for Christians to know the signs of possible trouble ahead when assessing a minister or ministry.

“The prudent sees the evil and hides himself,But the naive go on, and are punished for it.” (Proverbs 22:3 NASB)

See Also: What is Discernment?
See Also: Abusive Churches & Spiritual Abuse
Why Whistleblowers are Often Ignored (Even in Christian Organizations)