Many Christians have a mistaken perception of Charles Spurgeon’s view of defending the faith that they get from one of his sayings, “The Word of God is like a lion. You don’t have to defend a lion. All you have to do is let the lion loose, and the lion will defend itself.” This saying can actually be found in two of Spurgeon’s sermons: “Christ and His Co-Workers” (1886)  and “The Lover of God’s Law Filled With Peace”(1888).

His point in this saying seems to be to express confidence in the effectiveness of proclaiming God’s Word. Spurgeon believed the Spirit of God would honor the preaching of His Word. Some people, however, have wrongly taken that quote out of the larger context of Spurgeon’s ministry, claiming Spurgeon opposed defending the faith against wolves in sheep’s clothing who seek to do harm through false teaching. The misguided nature of this view of Spurgeon can be most plainly seen in Spurgeon’s repeated denunciation of modernism (liberal theology) in what has been called the down-grade controversy. The quote from Charles Spurgeon below sheds some light on this issue:

We must defend the faith. For what would have become of us if our fathers had not maintained it? If confessors, Reformers, martyrs and Covenanters had been indifferent to the name and faith of Jesus, where would have been the churches of today? Must we not play the man as they did? — Charles Spurgeon, from his sermon “Holding Fast the Faith” (1888)

When the targets of Spurgeon’s critiques complained that it was discourteous of him to denounce anything and that he should stick to preaching “positive” things, Spurgeon responded as follows:

A little plain-speaking would do a world of good just now. These gentlemen desire to be let alone. They want no noise raised. Of course thieves hate watch-dogs, and love darkness. — Charles Spurgeon, from The Sword and the Trowel (August, 1887) 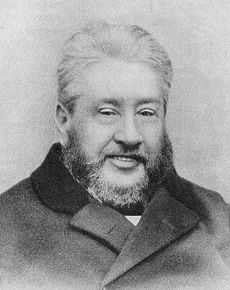 I have read one other quotation attributed to Spurgeon in which he supposedly says, among other things, “The gospel does not need defending. If Jesus Christ is not alive and cannot fight His own battles, then Christianity is in a bad state.” I have yet to find anyone who gives a source for this quote (and I have not found a source for it in my own searching). Thus, I cannot yet consider this an authentic quote from Spurgeon (though I am open to documentation of it).

Even if this is a genuine saying of Spurgeon’s, I suspect that at most it would be a reference to a distaste he may have had for purely intellectual apologetics/argumentation completely divorced from empowered proclamation. Charles Spurgeon most certainly believed in defending the faith once for all handed down to the saints, and this becomes clear when one reads the larger context of Spurgeon’s writings, especially as they relate to the down-grade controversy.
__________

Beloved, while I was making every effort to write you about our common salvation, I felt the necessity to write to you appealing that you contend earnestly for the faith which was once for all handed down to the saints. (Jude 1:3 NASB)