Argumentation and arguing are not the same. Arguing in the sense of quarreling is unscriptural and therefore sinful:

But refuse foolish and ignorant speculations, knowing that they produce quarrels. The Lord’s bond-servant must not be quarrelsome, but be kind to all, able to teach, patient when wronged, with gentleness correcting those who are in opposition, if perhaps God may grant them repentance leading to the knowledge of the truth. (2 Timothy 2:23-25 1)

Argumentation, however, need not be quarrelsome. In itself, argumentation is considered the process of persuasion through the use of reason. The Merriam Webster Dictionary defines it as “The act or process of forming reasons and of drawing conclusions and applying them to a case in discussion.”

In this sense, argumentation is not only allowed in Scripture; it is taught and modeled for us favorably, as conversion involves the whole person, including the mind which must believe along with the heart:

Therefore, knowing the fear of the Lord, we persuade men… (2 Corinthians 5:11)

Now when they had traveled through Amphipolis and Apollonia, they came to Thessalonica, where there was a synagogue of the Jews. And according to Paul’s custom, he went to them, and for three Sabbaths reasoned with them from the Scriptures,  explaining and giving evidence that the Christ had to suffer and rise again from the dead, and saying, “This Jesus whom I am proclaiming to you is the Christ.” And some of them were persuaded and joined Paul and Silas, along with a large number of the God-fearing Greeks and a number of the leading women. (Acts 17:1-4)

So he [Paul] was reasoning in the synagogue with the Jews and the God-fearing Gentiles, and in the market place every day with those who happened to be present. (Acts 17:17)

And he [Paul] was reasoning in the synagogue every Sabbath and trying to persuade Jews and Greeks. (Acts 18:4)

And he [Paul] entered the synagogue and continued speaking out boldly for three months, reasoning and persuading them about the kingdom of God. (Acts 19:8)

We are destroying speculations and every lofty thing raised up against the knowledge of God, and we are taking every thought captive to the obedience of Christ. (2 Corinthians 10:5)

We should always consciously depend upon the Holy Spirit to guide our words and enlighten the one we speak to. Still, while we must not be quarrelsome about the faith, we should engage in godly “argumentation” about the truth of the gospel itself with unbelievers, and also regarding the true teachings of the gospel (right doctrine) with those who are in serious error.

Though we rely on the Holy Spirit, the possession of certain tools will help to make our argumentation most convincing. A good understanding of the principles of logic is quite helpful and I maintain that it is not unspiritual. Rightly understood, logic is the recognition of the orderly mind of God and provides a commonly understood vocabulary for identifying good and bad reasoning.

Learning principles from modern, argumentation theory may also prove useful at times. Additionally, when discussing the meaning of a passage of Scripture, exegesis (the drawing out of the intended meaning of the passage) will follow sound principles of hermeneutics (interpretation). In the hands of a person who trusts in the Holy Spirit, these tools can maximize effectiveness in argumentation.

In discussing a topic with someone who disagrees, one may come to the point where the other person has exhausted all credible reasons for their disagreement. At that juncture they may concede that you are (or at least may be) right. They may, however, resort to a last ditch objection.

The term “last ditch” originates from military usage as the final rallying point or last chance to avoid defeat. Used figuratively in argumentation, a last ditch objection is a desperate, final measure which tries to divert the discussion from logic and reason, so that the objector can feel they have scored an emotional victory or at least saved face. I discuss below six of these objections that I have encountered, and how I have learned to answer them.

Of course what you assert is your opinion. If it were not your opinion, you would not have professed it to be true. Your opinion is the only one you can have. The person making this objection has an opinion too — just one that differs from yours.

People will sometimes say something like this in an effort to trump your reasoning with an implicit accusation of pride on your part — “you always think you are right.” This is true of everyone, however, including the one who says it about you.

No one can think something to be true and believe it is false at the same time. To do so would violate the law of non-contradiction. A belief cannot also be a non-belief at the same time and in the same relation. Proverbs says “Every man’s way is right in his own eyes” (Proverbs 21:2). This is universal. No one disagrees with anything they believe!

“Humility,” they will say, demands that all beliefs be treated as equally valid. Entailed in this objection is the assertion that there are absolutely no absolute truths — a contradictory and thus self-defeating argument.

The objection is also hypocritical. The person saying this is asserting by clear implication that you are less right than they are by your dogmatism — “arrogantly” thinking their relativism is more right than your absolutism. The person who puts forth this objection is guilty of the very thing they accuse you of.

This objection is very closely related to the one above, and is used by deeply postmodern people who think that truth is only a journey and never a destination. No one, they say, can claim to have The Truth. Everyone’s journey toward truth must be affirmed and all we can do is share our personal narratives in conversation.

Just as with the objection above, this statement is self-defeating in that it implicitly asserts The Truth that no one can have The Truth. They are saying it is wrong to say anyone is wrong. As a self-defeating statement it is nonsense.

This statement is made when moral considerations are discussed. As with the other objections this is self-defeating in that it claims it is wrong to call someone’s behavior wrong. Tell the person they are judging you for judging.

Additionally, it is a sweeping, categorical statement that, if applied consistently, says no moral assessments can be made. Does the person saying this believe child molestation or murder is wrong? If so, are they not judging?

This objection is also a misguided appeal to Scripture (Matthew 7:1). The kind of judgment Jesus forbids is hypocritical and self-righteous judgment (as Jesus’ further explanation in Mathew 7:2-5 shows). In verses 15 through 19 of this same chapter, Jesus exhorts us to examine or judge the fruit (character traits) of those who claim to be prophets. Throughout Scripture we are taught to exercise proper judgment in the sense of knowing right and wrong, and telling this to others — even calling them to repent of sin:

Do not judge according to appearance, but judge with righteous judgment. (John 7:24)

Therefore repent of this wickedness of yours, and pray the Lord that, if possible, the intention of your heart may be forgiven you. (Acts 8:22)

The person who says this has run out of logical arguments and is resorting to bullying through insults. They are like the person in a gunfight who has run out of bullets and throws their gun at the opponent. Tell them, “A generic insult is not an argument. You seem to have run out of logical points to make on this topic. I see no reason to consider my point stupid.”

After answering a last ditch objection, one of five things will happen:

1) The other person may concede that they have no more legitimate objections and may conclude the disputation by agreeing with your position. When evangelizing, this is the point to call for the person to believe and repent.

2) In another context, the other person may conclude by “agreeing to disagree.” This is generally a polite way to conclude a disputation in which neither party is fully persuaded by the other.

3) The other person may deftly change the subject to one in which they feel more confident of coming out on top. I recommend saying something like, “That is a different topic altogether. We can come back to that if you like, but I think we were just about finished discussing X.”

4) The other person may change the subject to a neutral one which involves no disagreement or argumentation. I recommend going along with such a change if the discourse is at an impasse. It is a graceful way to conclude the discussion on a pleasant note.

On one occasion, I vigorously discussed for several hours the merits of biblical orthodoxy and flaws of Mormonism with two Mormon missionaries. When the futility of further debate was apparent, we changed the subject and talked for a few minutes about political issues that we agreed upon. We were thus able to part on friendly terms.

5) The other person can resort to using more, mindless insults. All you can do then is shake the dust off of your feet and exit the conversation. Do not answer in kind. Such people count it a victory to upset you.

It is also wrong to engage in emotionally charged argumentation in which insults are exchanged, as this the kind of quarreling Paul told Timothy to avoid. As difficult as it may be, you will have to let the other person have the 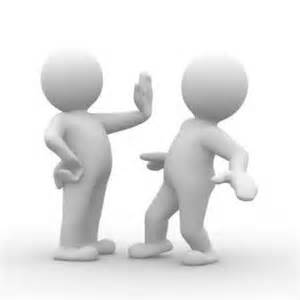 last word. This word will likely be illogical or misrepresent facts in some way. Still, trying to answer the hot-blooded person who is bent on “winning” is a hopeless proposition.

There will always be one more illogical or incorrect statement that follows and you will eventually have to let the other party feel the satisfaction of having the last word, even if it is wrong. The emotionally charged person is not in a rational state of mind and when objectivity has been left behind, the best one can hope for is to minimize hostilities. Perhaps the other person will later reconsider the points you made.

Ultimately, our goal must not be winning an argument but winning the person. Quarreling will only cause the other person to be resentful and less likely to see the truth. We are commanded, though, to lovingly tell others the truth, reasoning and explaining from the Scriptures, trusting in the Holy Spirit to impress the truth on the other party’s heart, and open their minds to understand.

When such argumentation reaches a last ditch, it takes wisdom to know whether to press on or back off. Offering the answers I have suggested and seeing the other person’s response generally helps in assessing the wisest course to take at that point. 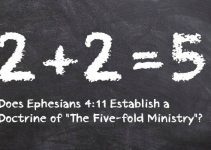