Corporate cults are businesses whose techniques to gain and keep employee commitment and loyalty are in some ways similar to those used by traditional cults.

This does not necessarily mean such companies are indeed ‘cults’ — at least not in the way most people think when they hear that term.

Few companies actually go as far as to engage in undue influence — a legal term, nowadays often used by cult experts instead of ‘mind control‘ or ‘brainwashing.’

Still, in his book, “Corporate Cults: The Insidious Lure of the All-Consuming Organization,” Dave Arnott says

The fact is that many corporations use the same manipulating and controlling tactics that cults do.

In cult-like cultures, employees pledge unconditional obedience to their leaders. They willingly relinquish their precious vacation days. They even subsume their identities, investing increasing amounts of time and energy in the corporation, at the expense of family and community. […]

[M]any employees willingly allow themselves to become “enculted.” In a misplaced quest for emotional support and self-esteem, they pledge their deep commitment to an organization–a commitment that will never be returned.

“Journalist Barbara Ehrenreich worked as a hotel housekeeper, a waitress, a nursing home aide and a maid,” the Atlanta Journal Constitution writes.

But it was her stint at Wal-Mart that was “unlike anything else I had experienced.”

“It wasn’t like going to work for a corporation as much as it is like joining a cult,” said Ehrenreich, who wrote about her experience as a $7-an-hour Wal-Mart worker in her book about the working poor, “Nickel and Dimed: On (Not) Getting By in America.”

Ehrenreich said the “cult-like atmosphere” began with an eight-hour orientation where she and other new hires were welcomed into the “family” fold. […]

Some multi-level marketing companies have been criticized for what detractors refer to as cult-like tactics.

Amway at one point even included a disclaimer in the Q & A section of its website, answering the question, “I’ve heard rumors that Amway is a cult. Is this true?”

Yet the Internet is full of blogs and websites denouncing the company or its sales associates as a cult. See, for instance, Married to an Ambot — “My story of what its like to be married to an Amway cult follower.”

Some Amway distributor groups have been accused of using cult-like tactics to attract new distributors and keep them involved and committed. Allegations include resemblance to a Big Brother organization with paranoid attitude to insiders critical of the organization, seminars and rallies resembling religious revival meetings and enormous involvement of distributors despite minimal incomes.
– Source: Wikipedia entry on Amway. Last accessed Saturday, February 23, 2013 – 2:13 PM CET

Large Group Awareness Training programs are sometimes referred to as “corporate cults.” This is due in part to cultic tactics (e.g. sensory overload, hypnosis, control of time or location, intense peer pressure, etc.), and because in some people, participation has lead to radical changes in personality, behavior, beliefs and perception similar to those seen among members of destructive cults.

Some companies encourage or require their employes to attend LGATs in an effort to build team spirit.

Sometimes employers try to force their religious views on employees — or require their employees to go against their conscience. Such is the case when, for instance, employees are forced to attend a Scientology seminar.

In October, 2012, Dr. Andrew W. Engel — a dentist in Bend, Oregon — was ordered to pay nearly $348,000 to settle allegations that he threatened to fire a dental assistant unless she attended a Scientology-related training session.

The employee felt badgered into attending, despite her concerns that it would conflict with her Christian beliefs (and indeed Scientology is, despite that cult’s claims to the contrary, incompatible with Christianity).

Companies are not necessarily ‘cult-like’ as long as there is an absence of deception and/or undue influence. 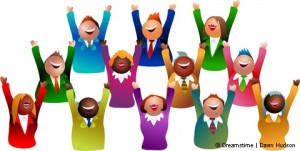 Merely encouraging enthusiasm, a team spirit, and devotion to the job or company brand is just good business practice.

A remarkable thing about cult mind control is that it’s so ordinary in the tactics and strategies of social influence employed. They are variants of well-known social psychological principles of compliance, conformity, persuasion, dissonance, reactance, framing, emotional manipulation, and others that are used on all of us daily to entice us: to buy, to try, to donate, to vote, to join, to change, to believe, to love, to hate the enemy.

Cult mind control is not different in kind from these everyday varieties, but in its greater intensity, persistence, duration, and scope. One difference is in its greater efforts to block quitting the group, by imposing high exit costs, replete with induced phobias of harm, failure, and personal isolation.
– Source: Philip Zimbardo, What messages are behind today’s cults?