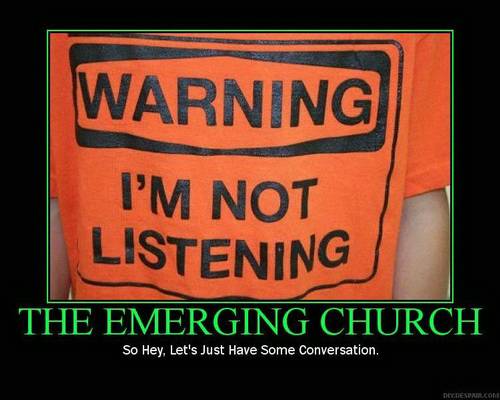 Although this is an obvious attempt at satire, the definitions provided do reflect the views [in caricature] of most of those who identify with this movement.

It is important to remember that the Emerging Church movement contains people of diverse beliefs, so no generalization about it applies to every member. Those readers who feel that satire is an inappropriate genre for theological discussion may skip this section even though you will miss some pretty clever stuff.

I hope emergents will receive this in the spirit in which it was intended since, in spite of my disagreement with emergents, I sincerely like them and have enjoyed being part of an online emergent community. — David Kowalski

Joining in the emerging church conversation can be confusing at first. The following glossary will help the novice begin to understand postmodern Christian jargon.