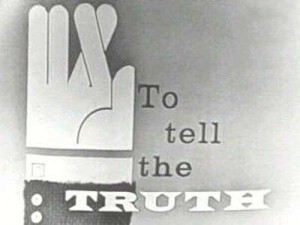 As a kid, I frequently watched the television show “To Tell the Truth.” During the show, three contestants would stand before a panel of celebrities, and each of those contestants would try to persuade the panel that they were actually the central character under consideration. After a session in which the panel would question the contestants and vote for who they thought was the one telling the truth, the host would ask. “Will the real ______ please stand up?”

In our day, not only are false ideas problematic, truth itself is being mimicked by impostors. Some people are using the word “truth” with an invalid meaning, causing the rest of us to distinguish real truth from the phony concept of it others may use.

I expected the emergent leader to put aside differences that day and pay his respects to a brother who had gone to be with the Lord. Instead, he used the occasion to heap ridicule upon Colson. Fellow emergents on the blog gleefully joined in. The day’s agenda for them was rude mocking of Colson’s quotation of D. A. Carson (a leading, Evangelical scholar), who said “truth is truth.”

This emergent had for years been calling this phrase “circular reasoning” but it is nothing of the kind. A circular argument seeks to prove its conclusion by appealing to a claim that depends on the truth of the conclusion. There must be some equivalent of “because” in the proposition, as in “postmodernism is right because the right philosophy is the postmodern one.” Colson did not say something was true because it was true (genuine, circular reasoning). He and Carson were distinguishing common sense truth from the pseudo, postmodern “truth” proclaimed by postmodern theologians and emerging church participants.

“True truth” is a phrase coined by Francis Schaeffer in his effort to communicate the gospel to the existentialist (truth is subjective, personal experience) mindset. Existentialist thinking — in which “truth” need not be objectively factual — became prevalent in the 20th century, paving the way for postmodern subjectivism in which my “truth” is only true for me. Each individual creates his or her own “truth.” “Jesus died for my sins” may be “true for me” as a postmodern but I must never “impose” “my truth” on others. Truth is never absolute and objective Truth for postmodern theologians and most emergents.

The existentialist “truth” Schaeffer responded to was similar to postmodern “truth” in that it was not objectively factual. Truth was considered something unrelated to the world of physical and historical facts. Thus, “Jesus died on the cross for my sins” need not have anything to do with a historical reality — but it was still “existentially true.” The Christ of faith was not the Christ of history. This was the posture of the neo-orthodox theology that is now experiencing a renaissance in some scholarly circles.

Schaeffer used “true truth” to distinguish real, gospel truth from the make believe truth of the existentialists. Contemporary Evangelicals like Colson and Carson have likewise used the phrase to distinguish truth that applies to all from the individualistic “truth” of postmodern theologians which has been expressed in the emerging church movement.

Some emergents on the day of Colson’s passing called “truth is truth” a rhetorical tautology  (a needless repetition of an idea, statement, or word as in “godless atheist,” or “three-sided triangle”). The phrase may look like a tautology at first glance but it need not be one. Argumentation theory allows the possibility for cognitive meaning in Colson’s phrase. Given the proper socio-historical context, a redundant statement like Colson’s can have cognitive meaning. Let me illustrate.

Imagine a young couple in a jewelry store, shopping for an engagement ring. Though there is a sign over the display case indicating genuine, diamond jewelry lies within, and though the salesman repeatedly refers to the gems as diamonds, the young man notices a white, 4×6 card in the corner of the case with small print on it. Straining his eyes to read the tiny print, the young man is shocked to learn that the card is a disclaimer, revealing that all of the stones in the case are cubic zirconia. Understandably upset, the young man confronts the salesman with this information, to which the salesman replies, “But these are diamonds.”

In an impatient tone, the young man asks, “Are these the naturally occurring minerals that are mined from the earth, or are they synthetically made crystals?”

The salesman shakes his head from side to side as he responds, “Oh no, these are not the kind of diamonds that come from the ground; these are made in a factory, but to me these are  diamonds.”

Exasperated over the jewelry store’s misuse of the word “diamond,” the young man retorts “Diamonds are diamonds. I want a diamond diamond.”

When Evangelicals use the phrase “true truth” or “truth is truth” they are defining the kind of truth they speak of because a counterfeit “truth” has become popular. Emergents always insist they believe in truth, they just don’t believe in “Truth.” In other words they don’t believe in truth that is objectively factual and which is true whether or not anyone believes it.

In short, most emergents don’t believe in true truth. I’m afraid there are times Evangelical believers must speak of truth that is really true because postmodern people we speak to often hold to a different kind of “truth” — one that is not really true.

Every form of postmodern thought — including postmodern theology — is self-defeating. They assert as an unquestionable truth the notion that there is no unquestionable truth, and they impose upon us their “truth” that no one should impose their truth on others. To most Christians non-true truth is an absurd, oxymoron. God witnesses to our hearts about real facts and we know them with certainty. This is not arrogance as the emergents claim. It is combination of common sense knowledge (beyond the scope of this article) and biblical faith. We do not know everything but we really do know some things.

The 1939 International Standard Bible Encyclopedia entry on “know, knowledge” says this concept in Scripture corresponds to facts known with certainty:

no, nol’-ej (in Hebrew chiefly yadha`, noun da`ath; in Greek ginosko, oida’ “to know fully,” epiginosko, noun gnosis epignosis): Knowledge strictly is the apprehension by the mind of some fact or truth in accordance with its real nature; in a personal relation the intellectual act is necessarily conjoined with the element of affection and will (choice, love, favor, or, conversely, repugnance, dislike, etc.). Knowledge is distinguished from “opinion” by its greater certainty. 1

The NASB translates ginosko as “know for certain” in Luke 1:18: “Zacharias said to the angel, “How will I know this for certain?”

Some philosophers have distinguished between knowledge and belief, claiming that belief has no certitude. Biblical faith, however, possesses real, certain knowledge:

men who forbid marriage and advocate abstaining from foods which God has created to be gratefully shared in by those who believe and know the truth. (1 Timothy 4:3)

Jesus says His disciples will not have mere, theological opinions. We will know truth:

with gentleness correcting those who are in opposition, if perhaps God may grant them repentance leading to the knowledge of the truth (2 Timothy 2:25)

John calls Christians those who know the truth.

The elder to the chosen lady and her children, whom I love in truth; and not only I, but also all who know the truth, for the sake of the truth which abides in us and will be with us forever. (2 John 1:1-2)

We may only “know in part and we prophesy in part” (1 Corinthians 13:9) but what we know is certain. This is so because the source of the knowledge is impeccable — our knowledge comes from the Spirit of God:

Now we have received, not the spirit of the world, but the Spirit who is from God, so that we may know the things freely given to us by God. (1 Corinthians 2:12)

do not cease giving thanks for you, while making mention of you in my prayers; that the God of our Lord Jesus Christ, the Father of glory, may give to you a spirit of wisdom and of revelation in the knowledge of Him. I pray that the eyes of your heart may be enlightened, so that you will know what is the hope of His calling, what are the riches of the glory of His inheritance in the saints, and what is the surpassing greatness of His power toward us who believe. (Ephesians 1:16-19)

By referring to this, when you read you can understand my insight into the mystery of Christ, which in other generations was not made known to the sons of men, as it has now been revealed to His holy apostles and prophets in the Spirit. (Ephesians 3:4-5)

To you it has been granted to know the mysteries of the kingdom of heaven, but to them it has not been granted. (Matthew 13:11)

Postmodern theologians will often respond that truth is “personal and not propositional” (see John 14:6). Truth and knowledge are, indeed, “hidden” in Christ (Colossians 2:3) but that knowledge is not just a relationship, it is also the knowing of things  in Him (see Jude 1:5). The New Testament overflows with the phrase “know that” which precedes specific things or propositions we know. A few examples from Romans should suffice:

I know and am convinced in the Lord Jesus that nothing is unclean in itself; but to him who thinks anything to be unclean, to him it is unclean. (Romans 14:14)

And we know that the judgment of God [b]rightly falls upon those who practice such things. (Romans 2:2)

knowing that Christ, having been raised from the dead, [a]is never to die again; death no longer is master over Him.” (Romans 6:9) For we know that the whole creation groans and suffers the pains of childbirth together until now. (Romans 8:22)

And we know that God causes all things to work together for good to those who love God, to those who are called according to His purpose. (Romans 8:28)

What Christians know is not “their truth,” it is the truth.

and you will know the truth, and the truth will make you free. (John 8:32)

The real truth is boldly standing and He imparts certain knowledge of specific, conceptual truths to those who believe. His truth is True.