Some voices in the church today are arguing against verbal or propositional (communicated concepts) evangelism, saying that a non-communicative kind of lifestyle evangelism should replace evangelism done through words. Asserting claims to know something about salvation that others don’t is thought by some to be arrogant (though these people seem to know we should not preach the gospel with words and they are unashamed of their non-preaching message).

Ironically, they make their arguments with words. It seems they do not oppose all communication with propositions — they narrow their dislike of propositions  to the spreading of the gospel. They are quite right in saying we should show our faith by how we live, but others will never know what our faith is without being told in spoken or written words. Below are some verses that address this topic.

Then Peter stood up with the Eleven, raised his voice and addressed the crowd. — Acts 2:14 NIV

Those who had been scattered preached the word wherever they went. Philip went down to a city in Samaria and proclaimed the Christ there … When they had testified and proclaimed the word of the Lord, Peter and John returned to Jerusalem, preaching the gospel in many Samaritan villages. — Acts 8:4-5, 25 NIV

Talking with him, Peter went inside and found a large gathering of people … While Peter was still speaking these words, the Holy Spirit came on all who heard the message. — Acts 10:27, 44 NIV

On the Sabbath we went outside the city gate to the river, where we expected to find a place of prayer. We sat down and began to speak to the women who had gathered there. — Acts 16:13 NIV

When they had passed through Amphipolis and Apollonia, they came to Thessalonica, where there was a Jewish synagogue. As his custom was, Paul went into the synagogue, and on three Sabbath days he reasoned with them from the Scriptures, explaining and proving that the Christ had to suffer and rise from the dead. “This Jesus I am proclaiming to you is the Christ,” he said. Some of the Jews were persuaded and joined Paul and Silas, as did a large number of God-fearing Greeks and not a few prominent women. — Acts 17:1-4 NIV

While Paul was waiting for them in Athens, he was greatly distressed to see that the city was full of idols. So he reasoned in the synagogue with the Jews and the God-fearing Greeks, as well as in the marketplace day by day with those who happened to be there. — Acts 17:16-17 NIV

Every Sabbath he reasoned in the synagogue, trying to persuade Jews and Greeks. — Acts !8:4 NIV

Paul entered the synagogue and spoke boldly there for three months, arguing persuasively about the kingdom of God. — Acts 19:8 NIV 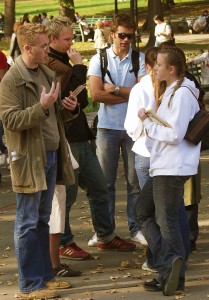 Those who say that non-communicative, lifestyle evangelism should replace propositional evangelism try to divorce what God has joined together. We are not to choose between showing and telling. We both show and tell to shine the light of truth in the darkness.

“And they were all filled with the Holy Spirit and began to speak the word of God with boldness.” (Acts 4:31 NASB)