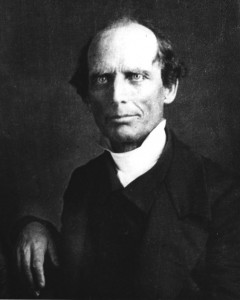 I believe God did use Charles Finney during the second great awakening. The frequently made assertion that “his” converts were only momentarily excited but not saved is based on some out-of-context quotations from observers of the awakening. The fact that God used Finney should not, however, be taken as His endorsement of Finney’s teachings (remember that God ministered to the Corinthians and Galatians in spite of their error and sins).

Finney seemed to base much of his teaching on personal observation and reason. He even refers to his theology as “natural theology.” His Systematic Theology is a strange work that is shaped like no other systematic theology. He begins with the concept of moral law and subordinates everything (apparently even God) to this concept. He rarely uses Scripture and often deviates from it.

Finney was a full-blown Pelagian. He denied that men and women are born with a fallen nature and taught that people were able to obey God’s commands in their own ability. He spoke of regeneration as though it were an act of the human will and he held to the moral government theory of atonement.

As for his ideas on revival, I’ll let his teaching (from his Revivals of Religion) speak for itself:

A revival is not a miracle according to another definition of the term “miracle” — something above the powers of nature. There is nothing in religion beyond the ordinary powers of nature. It consists entirely in the right exercise of the powers of nature. It is just that, and nothing else. When mankind becomes religious, they are not enabled to put forth exertions which they were unable before to put forth. They only exert powers which they had before, in a different way, and use them for the glory of God. A revival is not a miracle, nor dependent on a miracle, in any sense. It is a purely philosophical result of the right use of the constituted means — as much so as any other effect produced by the application of means. (From section 1 of lecture 1, “A Revival is Not a Miracle”)

Finney does go on in Revivals of Religion to speak of the Holy Spirit’s role in revival. Some of Finney’s supporters quote such statements out of the larger context of Finney’s writings in an unsuccessful effort to refute the idea that he took a humanistic approach to revival. If one reads all of Finney’s writings on revival, it becomes clear that he sees it as something that man produces (he often compares it to the work of a farmer).

Though Finney saw the Holy Spirit’s role as essential to revival, he saw that work of the Spirit as a necessary piece in a human production. To Finney, God does not send revival; we make it and God subsequently gets involved with our product.

Finney does say some very good things at times, but his reputation is so justifiably and sufficiently sullied in Evangelical circles that I consider it imprudent to quote from him as a source of sound teaching. Still, one need not reject the gracious work of the Holy Spirit done in spite of Finney’s aberrant theology.
__________________________________

“We go too far when we look upon the success that God gives to some persons, in making them the instruments of doing much good, as a testimony of God’s approbation of those persons and all the courses they take.” — Jonathan Edwards