Preachers sometimes instruct us that telling Christians what they should or should not do will only have the effect of making them more inclined to disobey.

A comparison is drawn with “wet paint” signs, which they say only incline people all the more to touch the paint. Their command to the rest of us is, “Don’t say don’t.” “It is wrong to point out what is wrong.” The passage appealed to in an effort to support this self-defeating argument is Romans 7:7-13. The most common interpretation of this passage is that the Mosaic Law has an effect on fallen men and women that actually provokes sin:

We should first observe that Paul does not blame the Mosaic Law for this provocation even though it is the occasion for the provocation. There was never anything wrong with saying what was wrong. Declaration of standards merely revealed what we already were — rebellious sinners by nature. Rebels chafe against restrictions and their rebellious hearts make them all the more inclined to do something they are forbidden to do — even if it is God Himself who prohibits the conduct in question.

Let us tear their fetters apart and cast away their cords from us! (Psalm 2:2 NASB)

This perverted, scofflaw inclination is a condition common to the unregenerate. Being a law unto themselves they become like a positive pole on one magnet that is repulsed by the positive law of God. The law is directed toward them but they reject it. 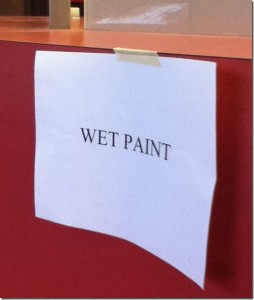 Some interpreters who see the effect Mosaic Law has on the unregenerate have subsequent difficulty with the NT concept of exhortation (Romans 12:8; 1 Corinthians 14:3; 1 Thessalonians 2:3; 2 Thessalonians 3:1; 1 Timothy 4:13, Hebrews 12:5, 13:22). The word translated “exhortation” is paraklesis, which has a wide range of meaning, including “comfort.” Greek words, though, are much like English ones in that the context indicates the author’s intent when a range of options is available.

All linguists agree that usage determines meaning. The English word “mad,” for example, can mean “angry,” “insane,” and even (in slang) “good” (as in “you have some mad skills”). Paraklesis is often used in the sense of Christian admonition (something about which all lexicons agree). Examples of such exhortations can be found, for example, in Ephesians 5 (NASB):

But immorality or any impurity or greed must not even be named among you, as is proper among saints; and there must be no filthiness and silly talk, or coarse jesting, which are not fitting, but rather giving of thanks. (vs.3-4)

And do not get drunk with wine, for that is dissipation, but be filled with the Spirit. (v.18)

The NT is filled with exhortations to do certain things and not do others. Jesus spoke of obedience to His commands as a perpetual requirement for disciples:

Go therefore and make disciples of all the nations, baptizing them in the name of the Father and the Son and the Holy Spirit, teaching them to observe all that I commanded you; and lo, I am with you always, even to the end of the age. (Matthew 28:19-20 NASB)

God writes His laws on our hearts (Hebrews 8:10) but those laws are still HIs. They originate and exist apart from us. The writing of these laws on our hearts, however, causes us to inwardly delight in God’s commands. Those who truly despise God’s moral law from the heart have genuine cause to question their internal state.

Test yourselves to see if you are in the faith; examine yourselves! Or do you not recognize this about yourselves, that Jesus Christ is in you–unless indeed you fail the test? (2 Corinthians 13:5 NASB)

In his commentary on Romans, Martin Luther says the following about the passage we first looked at in this post (Romans 7:7-13):

In the righteous who love the Law [emphasis mine], the Law does not work concupiscence (lust), nor does it give any cause for sin, nor does sin take occasion by the commandment (to sin all the more); for in them sin is no longer present as a dominating power, indeed it is truly dead. As an analogy I might refer to the heat in lime. No one knows that lime has heat until he pours water upon it. Then the heat has occasion to show itself. The water did not create the heat in the lime but it has made it manifest. It is similar with the will of man and the Law.

Exhortation is not a legalistic ministration of death for the regenerate. We need not fear that Christian admonition will make saved people sin all the more. Law provokes sin in the rebellious and “wet paint” signs provoke touching in scofflaws. As new creatures in Christ, we are neither rebels nor scofflaws at heart. As a child of God, I do not fear God’s “wet paint” signs. They are there for my benefit and I delight in them. If you are a fellow believer, transformed within, I have no fear in pointing them out to you as well.

To some theologians, the Lutheran “Formula of Concord” (1577) represents a mature, full-flowering of the Reformation, being more Protestant on justification and sanctification than the teachings of Martin Luther himself. Nevertheless, the statement also goes to great pains to defend what Calvin and others would call the “third use of the law” (as a guide to Christian behavior in its moral precepts) — though the confession was not a Calvinist one. The notion of exhortation was also clearly and repeatedly defended in the Formula of Concord as a hedge against Antinomianism (something Luther had vigorously warned of), in passages such as the following example:

“For especially in these last times it is no less needful to admonish men to Christian discipline (to the way of living aright and godly) and good works, and remind them how necessary it is that they exercise themselves in good works as a declaration of their faith and gratitude to God…”  (IV. 18) http://bookofconcord.org/fc-ep.php